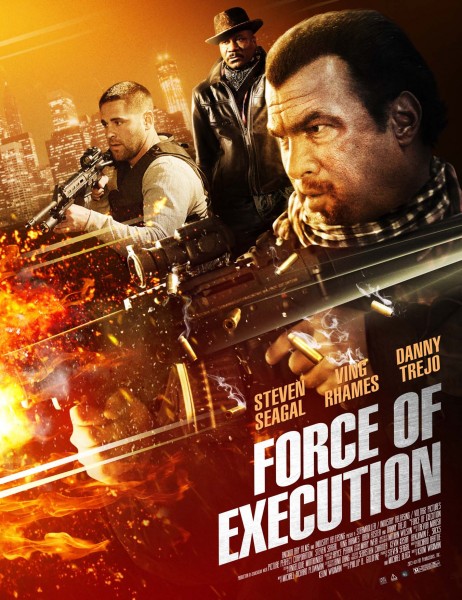 Plot: Hurst (Bren Foster) was a skilled enforcer who faithfully worked under an honorable Crime Lord named Thomas Douglas (Steven Seagal), but was forced to retire when he lost the use of his hands. Yet when an alliance between gangsters threaten his former employer, Hurst must force himself back into the game.

Steven Seagal used to be a successful action star, but audiences got tired of him once he started attempting to make socially conscious action flicks, which was only the beginning of the end for his career. He started making movies where the budget went mostly to him, even though he usually wouldn’t do a lot of work on these projects, so it was only expected that they would suck pretty hard. For the sake of fattening his wallet, which presumably contributed to the fattening of his stomach, he pretty much urinated on the fans who made him successful to begin with. But more recently, it seems like Seagal has made somewhat of an effort to repair his image, producing a successful TV show, appearing in “Machete”- his first theatrical release in years- as well as jacking up the quality of his direct-to-DVD features. “Maximum Conviction (2012)” was one of his most entertaining movies in years! Now I am genuinely interested in his works, whereas before I was merely feeding my self destructive habits whenever I’d watch a Seagal feature. Now we have “Force of Execution”, a bad step in the right direction…Erm, that doesn’t make a lot of sense, but to be fair, nor does the title. Nor does the plot. Yet at least everyone- from the actors to the director to the writer(s)- seemed to be trying to make an enjoyable flick. They didn’t really accomplish their mission, but they didn’t fail miserably either. There does seem to be a decent movie in here, but it must’ve been edited out.

Even though the marketing campaign is determined to capture your attention by boasting huge direct-to-DVD names like Steven Seagal, Danny Trejo and Ving Rhames, “Force of Execution” is actually a starring vehicle for Bren Foster- a martial arts performer. This was probably a good idea because while Foster isn’t a great actor, he does show off some impressive Taekwondo skills. His fights are shockingly decent…The problem? I watched this right after I viewed “The Raid 2”, which spoiled me on groundbreaking martial arts action. But for a direct-to-DVD Steven Seagal flick, “Force of Execution” is pleasantly watchable in the choreography department. Foster does have some presence and I suspect he’ll improve on his limited acting abilities. Steven Seagal, Danny Trejo and Ving Rhames are not taking this movie seriously, but at least they’re having fun. I have no idea what weird accent Seagal was attempting, but it continuously kept me amused. Seagal plays the mentor, Rhames plays the villain and Trejo’s part is minimal in comparison. Ving Rhames has a fight scene and it made me appreciate what Seagal is physically capable of doing, because that was laughably bad. The stunt double was obvious and the director is sure to obscure what’s happening as much as possible. Seagal’s hand-to-hand clashes are typical, but they’re acceptable considering it’s Seagal. There’s quite a bit of gun play too, although the action overall is just standard. Still, watching Seagal, Rhames and Trejo interact was enjoyable. They get the meatier material to work with, while the younger guy does the heavy lifting in regards to the fight scenes. Awesome. 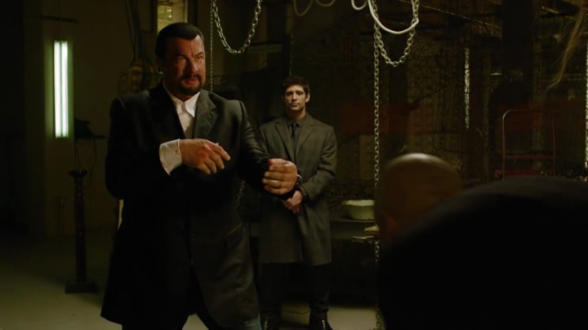 I do think there is a good story in here, but for whatever reason, much of it seems to have been left on the editing room floor. I had difficulty telling who was on whose side because they switch so suddenly, often without any kind of buildup to it. When someone killed somebody, I was either wondering who that somebody was or why they had to die because they were on their side- or so I thought. It just seemed like large chunks of the script had been removed. Also, the character arcs are practically impossible to follow. Seagal is shown to be a bad guy with some honor at first, but out of nowhere, he expresses remorse for his past life…Where in the hell did that come from? When exactly did Ving Rhames turn on him? I presume he was never really on his side, but that makes some of his confrontations hard to understand. One villain is introduced as the guy who crippled our hero, but he’s suddenly likable and noble at the end? I think “Force of Execution” wanted all of its characters to be morally ambiguous with shades of grey, but it was done in a way that just felt sloppy. Hurst is mostly a typical hero and Seagal’s ruthless side is only present early on. I also felt the dialogue was pretty terrible, but often in an eye brow raising kind of way. Was it just me or were a lot of the lines kind of racist? The black characters say things that sound like a racist white persons interpretation of how black people talk. Also, Danny Trejo’s says some things that I presume were intended to be directed towards the villainous blacks whom he had just encountered, but it just came off as racist. Above everything though, the “gangsta” lingo is just overblown and annoying.

Yet I have to concede that everyone does appear to be trying, even the screen-writers. I’m not sure if they’re just incompetent and couldn’t flesh out their own story, or if key chunks of the plot were taken out at some point. But the writers do want to tell a reasonably compelling story and for all the clichés- such as the token romance- and awful dialogue, I was never bored. I was sometimes even genuinely interested. The new lead has potential to become a big direct-to-DVD star (he reminds me of Scott Adkins) and the veteran cast is having so much fun that it becomes contagious. Director Keoni Waxman doesn’t give himself a lot of room to really show off much spectacle or style, but his direction is competent. “Force of Execution” isn’t a good movie, but I didn’t have a bad time either. Once again, the one thing I dislike about Steven Seagal and his movies is that they tend to be so lazy. “Force of Execution” does try to be something special, even if I can’t say it succeeded.

Random note: When Hurst appears to be dead and is being driven to his burial site, he’s placed in a pickup truck. But when they arrive, it’s a normal car. Did vehicles change at some point (for no reason) or was that a serious, stupid continuity error.

Violence: Rated R- I also really dug the violence of this movie.

Nudity: Gangster flicks love their strip clubs and yes, there is some titties.

Overall: “Force of Execution” is good enough to warrant a viewing for hardcore Seagal fans like me, although that doesn’t make it good. Unlike “Maximum Conviction” or even “A Dangerous Man”, I can’t recommend it to people who don’t care about Seagal. But if you consider yourself a fan, I’d say it’s worth a look. I don’t regret watching it, at least.