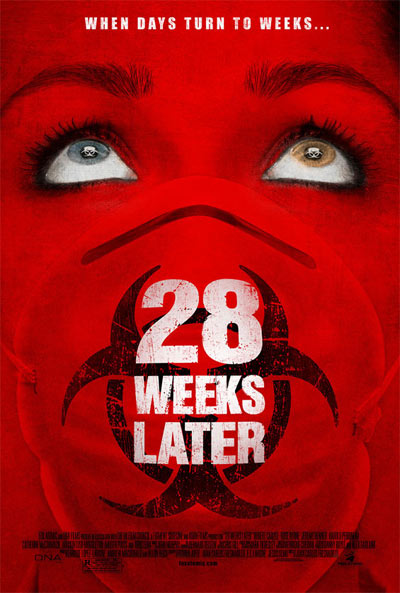 Plot: The virus that turns people into bloodthirsty maniacs has apparently been eradicated, allowing the Government to start rebuilding (and repopulating) parts of England. Unfortunately, mistakes are made and the menace returns. Two children (Imogen Poots and Mackintosh Muggleton) might have the cure within their DNA, so a soldier (Jeremy Renner) and a scientist (Rose Byrne) try to protect them when society begins to crumble again. But not only do they have to deal with the infected, they also have to dodge the military, who has been ordered to kill EVERYONE.

The general consensus surrounding “28 Weeks Later” is that it’s an entertaining zombie-less zombie flick, but it lacks the substance and artistry that made “28 Days Later” so memorable. This is technically an oversimplification of the films reception, which varies from “It sucks” to “It’s even better than the first!“. Pondering the wildly differing opinions, I’ve come to the conclusion that one can’t define “28 Weeks Later” as bad or good, because it has a lot of both. It’s definitely another case of sorting out the positive and negative attributes, so we can determine whether or not you will like it. As for me, I’d say I’m a fan. It’s definitely imperfect, but what makes “28 Weeks Later” unique is that the material and how it approaches said material is completely different from its predecessor. But is ‘different’ good? You’re going to have to decide yourself.

The biggest difference between the two is its pacing. “28 Days Later” starts off slow, gradually building suspense, before speeding up, then slowing to a moody crawl and then finally delivering a fast paced finale. “28 Weeks Later” opens with an action scene, but then slows down for the next 40 minutes or so. The first half of the movie isn’t building up tension, but it does do a good job at establishing the situation and the primary characters. “28 Days Later” definitely was superior when it came to character development, with the players here vaguely resembling archtypes. But both films have a great cast, which is amusing considering that many of these people would go on to bigger things. Jeremy Renner (“The Avengers“, “The Bourne Legacy“) is probably now the most famous, but there is also Rose Byrne (“X-Men: First Class“), Imogen Poots (“Fright Night“), Harold Perrineau (“Lost“) and Idris Elba (“Prometheus“). Oddly, Robert Carlyle (Don) was likely the biggest name when this was released, but his career didn’t get the same boost. The actors and actresses help make the thin characterizations more interesting. Furthermore, “28 Weeks Later” is incredibly unpredictable. I wasn’t necessarily shocked by certain characters deaths, but I was often surprised at when they bit the big one. I never could tell who the main character was and I even felt that the kids were in danger. The problem with kids in horror movies is that you rarely believe they are really in peril, because people get squeamish when children are harmed, but “28 Weeks Later” made me uncomfortable for them. In a way, it made me squirm even more than the previous film did.

Around the half way point, the shit hits the fan and the movie suddenly becomes action packed. Seriously, they occasionally will take a quick breather, but you won’t go five minutes without something happening. Characters are constantly running, shooting, and dying. My biggest complaint is that it doesn’t really try to disguise some of the victim fodder. A few stragglers join the crew, but they’re only there to provide a corpse. There are also some really dumb parts, like how easy it is to bypass the military. I couldn’t quite swallow how certain events went down, but I liked how chaotic everything went once the outbreak returns. You see and feel everyone’s panic, especially when people find themselves locked in a room with some of the infected. I started hyperventilating because that scene was so intense. From then on, you have your basic survival formula. Everyone runs from the crazies and the increasingly ruthless military. But before “28 Weeks Later” allows itself to become generic, it will always have an exceptional sequence. I loved the helicopter massacre, which boasted shockingly good effects. I also loved the 1st person POV part, which was easily the scariest moment in the film. In general, there’s a lot more action, horror and gore this time around.

Many have accused “28 Weeks Later” for lacking the intelligence of the first one and I agree to an extent. To its credit, it does try to have some depth surrounding an infected person who might’ve retained some of his memories. It was an interesting idea, but it wasn’t explored enough and occasionally came across as contrived writing. Some reviewers have praised the dysfunctional family unit that forms between the survivors, but the first had already done that and they did it better. Here, it’s as if the writers were trying to be complex, but lacked the insight to pull it off. Furthermore, this sequel lacks the artistry of “28 Days Later“, although that can be justified by the pacing. There wasn’t enough time to exploit the gorgeous scenery (as much) or experiment with weird camerawork. “28 Weeks Later” has a few moments that are reminiscent of its predecessors visual style- primarily due to the use of music and the epic cinematography- but it aims to be more raw and visceral. I don’t believe that its goals made it inferior to “28 Days Later“, but it’s a case of apples and oranges. As I said, you have to make your own decision. Do you want a character driven drama that focuses more on how the outbreak has effected the survivors? If so, watch “28 Days Later“. Once you’ve seen that, does the idea of a sequel that emphasizes the outbreak itself appeal to you? If so, watch “28 Weeks Later“. Regardless, I thought both did a good job at being what they are.

Violence: Rated R. It’s the more violent of the two.

Nudity: You could see a little bit when two extras are having sex.

Overall: “28 Weeks Later” is an interesting follow-up, so it’s worth a look if you’ve seen the original