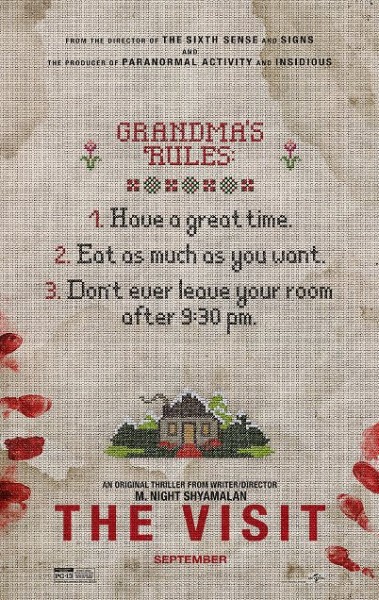 Plot: Two siblings (Olivia DeJonge and Ed Oxenbould) are sent to stay a week with their Grandparents (Deanna Dunagan and Peter McRobbie), who live in an isolated farm within the woods. Everything starts out fine, but soon their elderly hosts start displaying disturbing behavior…Are the kids really safe?

M. Night Shyamalan didn’t just open his career with a string of highly popular movies, he managed to make himself a household name despite working primarily behind the camera. Most writers and directors- good or bad- tend to be very transparent for general audiences, so only hardcore viewers will recognize Gareth Edwards, Josh Trank or even J.J Abrams, but everyone knew who M. Night Shyamalan was. Much like Alfred Hitchcock, Shyamalan had developed the cinematic equivalent of ‘cult of personality’, so his image soared as he released “The Sixth Sense“, “Unbreakable“, “Signs” and even the “Village“- which isn’t especially loved, but wasn’t considered a disaster. We were mostly interested in these films because of his involvement. But then he did “The Lady in the Water“…and “The Happening“…and “The Last Airbender“…and “After Earth“…Way too many high profile trainwrecks. Audiences weren’t questioning his talent as much as they were presuming that he had gotten lucky with his earlier successes, unless his goal was to prove that the bar can be lowered even after it had been buried three feet underground. Now that would be the ultimate twist! I remember seeing the phrase “from the mind of M. Night Shyamalan” attached to the trailer of “Devil“, accompanied by jeers and groans from the audience. Ouch! Plus, it takes a true level of anti-talent to derail the career of Will Smith. So not only did his name- which he had firmly implanted into popular culture- become a laughing stock, it was also box office poison.

In retrospect, I think the masses suffered from overexposure to “The Sixth Sense“, which might be why everyone prefers talking about “Unbreakable” these days. We’re just sick of it and we all know the twist, which deflates much of its impact. “Signs” was well received upon release, but has also suffered from a back-lash over the years. I remember liking them all, but it’s been a long time since I’ve seen them and I have no desire to necessarily revisit these movies. “The Village” initially had a mixed reception, but it seems like the positive reactions have vanished since its release, as everyone only speaks about it with a harsh tone. I thought it was an interesting experiment, albeit one that didn’t really work out. By now, audiences were getting used to his patented twists and it was becoming a memetic joke- much like Michael Bay’s obsession with explosions. Ultimately, I think “the mind of M. Night Shyamalan” was getting a bit full of itself by this point, as “The Lady in the Water” was laughably egotistical in its nature. He had burned a lot of bridges behind-the-scenes and without anyone to reign him in, “The Happening” was laughed off the screen. He eventually sold out with “The Last Airbender” and “After Earth“, probably figuring that they couldn’t fail…But they did and those films are so soulless that I don’t believe he experienced any joy making them. The actors in particular look lost, as if they aren’t receiving any direction from “the mind of M. Night Shyamalan“. “Devil” was a strange marriage of both everything good and bad about the director, even though he only produced it. I bring all of this up because I suspect that he has finally been humbled by his failures…at least a little bit…because while “The Visit” contains many flaws, I do feel like he has learned from most of his mistakes. I felt the passion, focus and energy behind the camera, restoring my hope that maybe…maybe…M. Night isn’t a hack who just lucked out. Maybe… 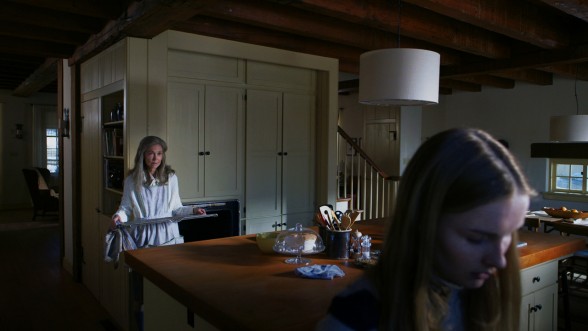 “The Visit” is a very campy horror flick, designed to produce giggles as often as screams and this isn’t like “The Happening” which produced giggles instead of screams, causing M. Night to try and save face by claiming we were supposed to be laughing. I thought this was a funny-ass movie. I’m not entirely sure what ‘funny-ass’ means, but it was the first thing that came out of my mouth when I left the theater. The actors had great comedic timing and the jumps are so over-the-top that they made me laugh and jolt at once. The humorous dialogue is mostly simple, but the lines are delivered in such a way to make an amusing moment even more amusing. Admittedly some of the dialogue thinks it’s more clever than it really is, but once again, I felt like M. Night was trying. Good or bad, I desire effort from any film I watch. I want to stress that this isn’t aiming for the ‘so bad, it’s good’ approach. It’s just intended to be a funny horror flick. It had a strong core with interesting characters who had hilarious dynamics, some surprisingly deep- if a bit heavy handed- themes and a consistent tone…until the ending. Throughout the first two acts, the horror and comedy are balanced in such a way that I never felt like they were working against each-other. The marriage between the two genres was a seamless one, but then it gets darker and very nerve-wracking. Considering I hadn’t felt like there were real stakes before, I was suddenly chewing on my nails. It was still showing a humorous side, but now the laughs were more awkward. Unfortunately, the ‘refrigerator’ bit at the very end took me out of the narrative as it’s just too comedic. I guess it’s pretty side splitting on its own, but it didn’t fit with what proceeded or followed it. The epilogue was just too mawkish and emotionally manipulative for my sensibilities and then it goes back to humor for the last scene. Stop jerking my emotions around, dammit! So the resolution kind of lost me, but I thought M. Night Shyamalan did a surprisingly good job at genre-balancing. The audience I viewed “The Visit” with was laughing harder than I was and shrieking every time something marginally creepy occurred on-screen. I love this kind of crowd as it magnifies the experience, although my Dad didn’t like “The Visit” as much because he didn’t care for its sense of humor. So everyone will have a different reaction.

I wasn’t aware that “The Visit” was a ‘found footage’ flick based on the trailers, but…it is…If you weren’t expecting this either, it’s because the camerawork is so professional and clean…maybe even too professional and clean…that if it wasn’t for the characters constantly reminding us that they are filming a documentary, you probably wouldn’t even notice. Even my Dad, who loathes this style of film-making because he finds it so disorienting (he walked out of “Cloverfield“), didn’t have any trouble sitting through this. You can actually use the lack of shaky camerawork as a valid point against the film, as “The Visit” is much more ‘pristine’ and ‘cinematic’ than most of its ilk. ‘Found Footage’- and yes, horror-based mocumentaries are part of this subgenre- is supposed to gritty, dirty and authentic looking, which “The Visit” is obviously not. I can understand both sides of this argument, but the visual style here didn’t really bother me. M. Night handled the suspense very well and delivers some creepy imagery, although I can’t say he ever truly terrified me. Even lesser horror flicks often offer at least one standout moment, but I can’t pinpoint anything amazing here. Maybe the reveal of the twist? Or maybe the ‘hanging’ shot? Good stuff, but I don’t know if anything about “The Visit” will remain within my memory for a long amount of time…except maybe those dirty diapers…They will haunt my dreams forever…The cast is excellent, with the Grandparents alternating between sweet, cool and unnerving so swiftly that sometimes you won’t even notice the transition. Even the kids are shockingly good, with their characterizations defying what we expect of them. Sure, they occasionally do something irritable in other to drive the plot. I’m sorry, but no one is going to hold onto that camera while watching their Grandmother try to smother herself. They will drop it and use both hands to restrain her. Nor will they be so insensitive to keep filming while they inform their Grandfather on what they had just witnessed. But the older sister isn’t stereotypically aloof and the brother isn’t stereotypically annoying. They had distinct personalities and underwent legitimate character arcs. Everyone had chemistry together and I enjoyed watching all of their interactions. This made the slow pacing easy to endure, in contrast to…let’s say “Paranormal Activity 4“, where I got bored and impatient long before the narrative started picking up any momentum.

Will “The Visit” restore M. Night Shyamalan’s namesake to its past glory? No. “The Sixth Sense” and “Unbreakable” were superior, based on my memory of them. Even “Signs” stands out more, although I don’t want to necessarily say it was better. This isn’t a game changer, nor will it probably even be regarded as among the best horror features of the year. But I do believe this is the right step towards repairing his image. Its goodness does not outweigh the badness of the combined forces of “The Last Airbender“, “After Earth“, “The Lady in the Water” or “The Happening“, but maybe it cancels out one of them? Even though those are all bad movies (some being worse than others), I never jumped on the hate-Bandwagon that has followed M. Night around. So I do hope that this is the beginning of a new era for him. Maybe I’m being too optimistic, but I do love a good redemption story. “The Visit” was a lot of fun, flaws and all, but we’ll have to see whether or not it means anything in the long run. I was torn between giving this a 2.5/4 and a 3/4 star rating, but I’m going to be more generous because of the overall experience- the fun crowd and the realization that M. Night hasn’t completely lost ‘it’.

Violence: Not much. There is some unnaturally gross stuff, but most of the violence is implied.

Nudity: We get some naked old chicks…and yes, we do see…things that cannot be unseen…

Overall: “The Visit” is a quirky, campy, funny and sometimes even scary horror-comedy, even if it’s nothing exceptional. Easily the best film M. Night has made in years, although that doesn’t really mean a lot anymore.