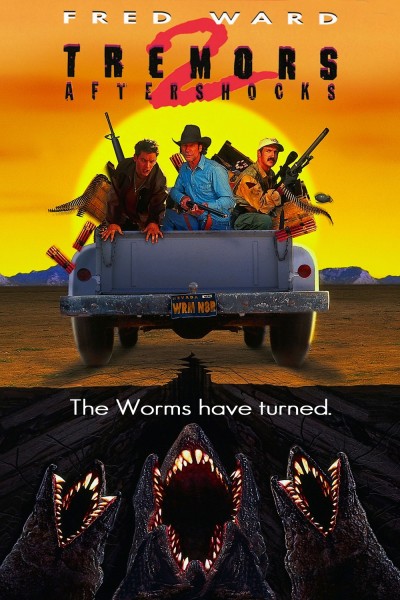 Plot: Earl Bassett (Fred Ward) is recruited by a Mexican Oil Company to locate and kill Graboids- large underground monsters who are preying upon the workers. He reluctantly takes the job and everything goes smoothly. But then the Graboids begin to change…

“Tremors 2: Aftershocks” is one of the few ‘direct-to-video’ success stories, despite having just about everything working against it. “Tremors” was amazing, but it wasn’t a big hit during its run in theaters, instead finding its audience on television and home video. This inspired the production of a sequel, but the budget would be cut in half and it would be released straight to video in order to minimize advertising costs. This was back before ‘direct-to-video’ would become synonymous with ‘It’s too sucky to be released theatrically’. Back then, it was a carefully considered business decision. Furthermore, while Fred Ward and Michael Gross would reprise their roles, the big star of its predecessor- Kevin Bacon- chose not to return. This wasn’t looking pretty, but in retrospect, the filmmakers masterfully evaded the budget problems. Without Kevin Bacon devouring the financial resources, they could now spread the cash amongst other aspects of the production. Furthermore, they wouldn’t have to build a town-set. Instead, it takes place in the plains of Mexico, where there isn’t a building in sight. Sure, there is the refinery, radio tower, etc..But the sets and number of actors were minimal. Therefore, the low budget was used to provide more explosions and the Graboids look just as good as they did before. Well, sorta…If you think about it, those tongue-monsters which come from their mouths don’t do anything this time around, but that’s because the Graboids aren’t the main monsters. They evolve into…something else. The new threat is also brought to life by old fashioned- but highly advanced- puppetry and animatronics. They look great. There is some CGI, but it was used sparingly and I thought it blended with the practical effects pretty well. That’s impressive when you remember this was made for little money in 1996, where even lavish productions struggled with convincing CGI effects. So the filmmakers really deserve credit for masking the low budget, making “Tremors 2” seem like a bigger production than it really was. But what about the rest of the movie? Erm, it’s good? “Tremors 2” is great fun because it recreates the magic of “Tremors“, while not imitating it. Amusingly, its biggest flaw is that it’s just not as exceptional as its predecessor was.

Whereas “Tremors” juggled action, horror, comedy and adventure together rather evenly, “Tremors 2” breaks up its many genres into different segments. The first segment- which takes up about half of the movie- is pure action/comedy/adventure. It’s just Earl (Fred Ward) and Grady (Christopher Gartin) goofing around and slaying Graboids. They bicker, exchanging plenty of funny dialogue and endure wacky hijinks with those underground worms. While Christ Gartin, who is the comic relief, does occasionally cross into annoying territory, he and Ward do have solid chemistry- even if Bacon and Ward made a better team. The film showcases plenty of clever ideas, such as using remote controlled cars which are laden with explosives. But more than anything, the first half of “Tremors 2” is just nonstop fun. The country music, the breezy pacing and the goofy tone kept me smiling. It gets even better when Burt Gummer (Michael Gross), who would go on to become the face of the franchise, shows up in all of his gun-totting glory. Even when things go wrong, such as when a Graboid manages to grab a hold of their car, the event is portrayed in a playful manner. I saw “Tremors 2” when it was first released and even though I was disappointed at the lack of scares (at that time), it didn’t stop me from enjoying myself. I just had to sit back, enjoy the ride and concede that this wasn’t intended to be horror. But then the second segment begins… 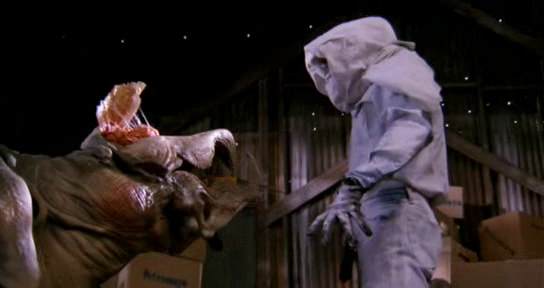 Earl and Grady chase a Graboid, which suddenly bursts from the ground and they end up crashing their car. They’re stranded now, presumably being hunted by a hungry Graboid. But then…nothing happens. They bravely choose to check up on it and find the creature to be sick. Its groans terrify them. I don’t know if I would really be spoiling if I say what happens, as it’s common knowledge by now, but lets just say the Graboids begin to give birth to something. This is the shortest segment of the movie, probably ranging 15-20 minutes, but it’s also surprisingly scary. The suspense is agonizing, as the characters have no clue what’s going on, nor does the viewer. The “Pedro’s Truck” sequence always gets to me. The ambiance, the low key score and the characters terrified reactions found their way under my skin. The fact we don’t see what’s doing all of this doesn’t just add to the terror, it drives it. I also love how for a brief moment, you actually think some of these more important characters can die. When Burt is suddenly ambushed, I remember being horrified as a kid for that reason. Yet there’s also a certain level of black comedy to everything. Certain reactions are so over-the-top and silly that it doesn’t betray the tone established by the first half. This segment only lasts a single night, which leads to the final segment of the movie.

The third segment is a combination of action, comedy and horror. There are plenty of suspenseful scenarios, where I chewed my nails in anticipation, but I wouldn’t call it scary anymore. Yet you have to give the director credit for being more brazen about its B-movie origins, while also being able to deliver white-knuckled tension. The explanations surrounding the Graboid’s origins, some of the over-the-top deaths and overall tone suggests “Tremors 2” is paying tribute to plenty of B-monster movies. I thought it was very tongue-in-cheek, although many reviewers took the movie seriously. During the finale, the new creatures have overrun the refinery, which was the home base. They’re also reproducing at a frighteningly quick pace, meaning that our heroes have limited options. It’s cool seeing Earl devise creative strategies to outsmart the enemy, while at the same time, Burt tends to screw up a lot. Burt is badass, but he occasionally crosses into gary-stu territory, so it’s nice to see he’s not perfect. Yet even these nail biting scenes are only there to heighten the entertainment level. There’s plenty of belly aching laughs and action at the same time, so the finale is just as riveting as the rest of the movie- but maybe for different reasons. 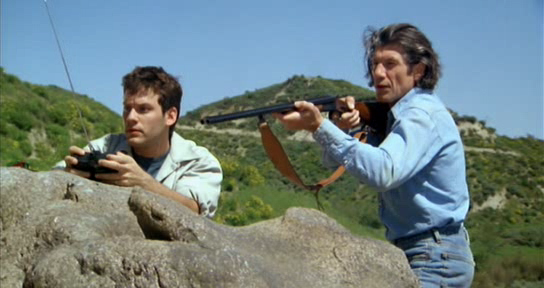 The most difficult thing to describe about “Tremors 2” is that even though it’s good for the same reasons that its predecessor were, it’s not AS good. Even though the comedy is funny, it’s not quite as clever as the original. Even though it has suspense, it’s not AS suspenseful- although the previous one never was as spooky as the middle segment. But maybe more than anything, I felt the supporting cast was dull compared to the cast from “Tremors“. In that film, everyone was interesting and I appreciated how any of them could die, but that didn’t necessarily mean everyone had to die. With “Tremors 2“, other than that 20 minute segment during the middle, I never had any doubt who would live and who would die. If you’re Mexican, the chances of your surviving are very low (many have expressed disdain at the racial implications). But comparing it unfavorably to the original just goes to show how awesome “Tremors” really was. “Tremors 2” is just…somewhat less awesome. I’d still say its a solid and highly entertaining monster flick. It also turned out to be a big hit in the DVD market, but unfortunately, this backfired for me. Animatronics would be replaced by copious amounts of (bad) CGI, Burt Gummer would become overused and the silliness would be taken to obnoxious levels. “Tremors 3“, “Tremors 4” and the T.V series all have their fans, but I’m not one of them.

Nudity: None, but you see part of a female backside on a picture.

Overall: “Tremors II: Aftershocks” is a strong followup to the first film, even if it’s nowhere near as great.