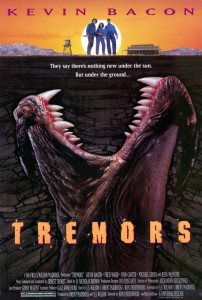 Plot: Valentine (Kevin Bacon) and Earl (Fred Ward) are the local handymen of a town called Perfection, which is located somewhere in Nevada. It’s a small town with only a handful of residents, where money likely will never be made. The duo decide they’ve had enough of it and opt to leave. Unfortunately for them, they left one day too late as four giant monsters have decided to invade the county. They live underground and attack you based on sound, so our beleaguered heroes and the rest of the townsfolk must unite to survive.

What makes “Tremors” so endearing is that it isn’t satisfied with just being a monster movie. It makes room for all sorts of different genres. Generally, this is a warning sign. Most examples of films trying this end up being rather underwhelming, because they’re usually only “a little” of everything and not a lot of anything. The viewer then finds themselves wanting a little more terror or a little more action. But “Tremors” solves this problem by being a lot of everything. It is an old school monster movie that provides a lot of jolts, tension and even suspense. The monsters look awesome, thanks to creative designs and exceptional animatronics. They feel more real than most modern CGI effects. Yet the film also knows when to keep them hidden. Much like how “Jaws” creatively used the barrels in place of the shark, this film employs many different unique ways of alerting the audience to the monsters presence. Sometimes it’s the ground moving, sometimes a house or vehicle shakes and sometimes they even do POV shots. These tactics succeeded in building tension and excitement.

But it also is a black comedy, making us laugh with great comedic timing and memorable dialogue. A major part of the films success is how it treats the characters. Val and Earl are the protagonists and their bickering is very amusing because they are amusing. Their chemistry is arguably the glue that holds everything together. But the film doesn’t stop there. The bulk of the cast is surprisingly interesting, each character giving the film different flavors of their own. My favorite- and everyone’s favorite- is the gun slinging Burt (Michael Gross). He could’ve easily been a caricature, but his little quips and the moments with his wife create a very endearing character. When he and his wife confront the “graboid” (what they call them), you feel despair at the prospects of them dying but it turns into sheer awesomeness when the other characters hear “gunfire”. The script is just clever, playing with its cliches and flipping them around. Everyone thinks that Rhonda (Finn Carter) knows what is going on because she’s a scientist, because scientists know everything in movies, but she she’s just as clueless as they are. They play with that a lot, but not too much. Hell, some characters I expected to be worm food survive for no apparent reason other than to throw us off. The humor is placed within the right points of the film, never feeling out of place but also making the experience much easier to swallow and enjoy. There is a perfect balance of horror and comedy, with “Tremors” being one of the few movies that can even be scary and funny at the same time! 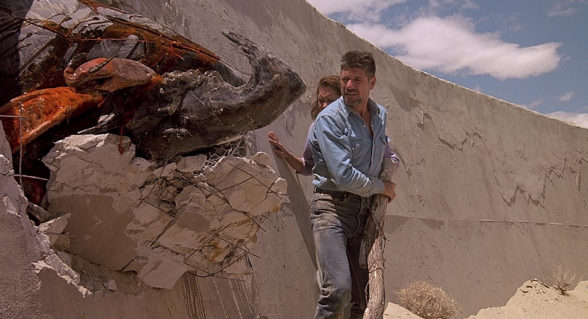 “Tremors” is also a western, albeit a modern day one. The opening shot showcases the vast desert with country music playing in the background. Earl and especially Val are dressed in Cowboy attire and the town itself feels like it was lifted from the old west (a modernized version of it anyway). The western angle is generally just there to isolate the townsfolk while being a nice sandbox for the underground monsters to play in. Finally, “Tremors” is also an action movie. Once it gets going, the film never stops because one epic sequence is followed by another epic sequence. Some scenes are just pretty clever with the action, such as when the characters have to pole vault off the rocks to survive. Some set pieces are surprisingly ambitious. I love it when the Graboids start causing the buildings to collapse from underneath the characters. “Tremors” seems entirely comprised of memorable action scenes- the gun battle, the tractor escape, the lawn mower chase, the “fishing with dynamite” solution and of course the epic finale. Plus, the film has a nice romance subplot (how many times have I said that?) and they even fit in an existential crises in there. This is a movie that does EVERYTHING right. I love the script, direction, acting, special effects…EVERYTHING. It’s funny, frightening, exciting and awesome, all wrapped in one cinematic package. As a child, the film captivated me for keeping my interest and scaring the pants off me. As an adult, the film captivated me for keeping my interest and…well, I wasn’t wearing any pants anyway. It’s just a cool movie that everyone should watch. Want to see an action-comedy-horror film with cool characters fighting off cool monsters in a western setting? If so, check out “Tremors” for sure.

Nudity: A woman is in her panties during one scene.

Overall: “Tremors” is a movie that I’d recommend to anyone and everyone, regardless of your feelings about the genres it combines. It’s great!