(Written and Directed by Kazuo Ikehiro) 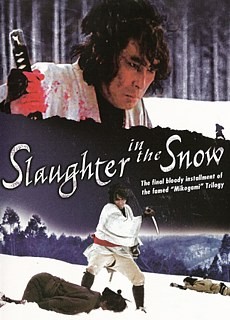 Plot: Jokichi of Mikogami (Yoshio Harada) finds himself hunted by a knife wielding bounty hunter (Natsuyagi Isao), but the two strike a bond when they’re both targeted by a ruthless Yakuza clan.

“Slaughter in the Snow” is the third Jokichi of Mikogami movie, following “Trail of Blood” and “The Fearless Avenger”. Let us strip naked and dance around in joy, for Kazuo Ikehiro FINALLY was able to fix the weaknesses that plagued the previous two films. No longer does it feel like they’re trying to cram in as many storylines as possible, instead opting to have a linear, focused narrative that’s no more convoluted than a typical “Zatoichi” movie. The editing is smooth- even inspired- and the camerawork is phenomenal. Hurray! Wait, what? You say that despite all of this, “Slaughter in the Snow” is the most unsatisfying of the trilogy? FUCK! I guess we can put our clothes back on now…although I choose not too…I like being naked…

“Slaughter in the Snow” apparently did not intend to be the last adventure of Jokichi of Mikogami, as he has yet to take his revenge on Chuji. Instead, this is a standalone story, where Jokichi is only a bystander. The REAL protagonist is Windmill Kobunji (Natsuyagi Isao), even though he’s determined to slay Jokichi. Whereas “The Fearless Avenger” was a deconstruction of the Ronin hero, “Slaughter in the Snow” deconstructs the friendly rival who is doomed to cross blades with said hero. Kobunji has a tragic past, ambiguous motives and he’s dying from consumption (remind you of a certain blind swordsman movie?). Both he and Jokichi are friendly towards each-other and even become temporary allies, but if you expect a conventional clash between the two men, you’re quite wrong. Jokichi witnesses Kobunji rescue a lady from a gangster using his mad knife skills and Kobunji immediately recognizes Jokichi. They travel together, despite Kobunji’s declaration of violence and even pick up a mysterious woman (Michiyo Yasuda), who wishes to see Kobunji kill Jokichi. Unfortunately, the man whom Kobunji wounded is a Yakuza higher-up and now the sectors gangsters are hunting them down. What follows is a depressing plot that shows that sometimes, these stories don’t end happily or honorably.

This sounds good on paper, right? I definitely like many of its ideas and even appreciate how some of them are executed. However, something just feels…off about this picture. Even if the narrative isn’t as cluttered, they don’t do much with some of the subplots. What was with that woman who kept following them? I expected that to lead into something important, but it doesn’t lead anywhere. While this is debatable, “Slaughter in the Snow” has an ugly misogynistic streak to it. Women are victims of violence or require men to save them. They are portrayed as shallow, callous and rude. I’ve always felt that the trilogy was against misogyny, but this one indulges in it. Even Jokichi no longer reacts violently to rape, having every intention on letting the woman get violated/killed before the thugs start harassing him. Maybe I’m mistaken. Maybe “Slaughter in the Snow” is just misanthropic, but the women are not portrayed positively. Hell, the most substantial relationship in the movie is between two men (there are a lot of homoerotic undertones), but I could be looking into things too deeply.

“Slaughter in the Snow” does bring back the surrealistic vibes when it came to the films visuals. In fact, I’d say aesthetically it’s more refined than “Trail of Blood”, while also being more ‘out there’ than “The Fearless Avenger“. The cinematography is perfect. Every shot is framed meticulously and the gorgeous scenery is captured in all its glory, even though the camera always seems to be moving. The camerawork really surprised me, as it seems like they used some advanced techniques that weren’t often present during this time. The editing is ambitious, showcasing some bizarre transitions, but it also can be a little self indulgent. They superimpose a sex scene over some action and while I thought it was clever, it goes on a little long. In fact, that’s the main problem. Every scene seems to linger more than it has too.

“Slaughter in the Snow” is HORRENDOUSLY paced. It’s only like 82 minutes long, but by the end of the movie, I felt like I had witnessed a three hour debacle. There are so many sequences that didn’t feel needed and even the relevant ones overstay their welcome. There isn’t as much action as there was before, but it’s also just not very good. The choreography’s relationship with the camerawork is successful, but it’s generally just characters flailing around in the snow. That might be realistic and continues some of the themes present in its predecessors, but it was just unexciting to watch. There isn’t as much diversity within the battles either, so they do get old pretty fast. The finale is smaller in scale compared to the previous entries, while not changing up the formula. Once again, Jokichi takes on a large group of people, but the group isn’t AS large as the ones he fought before. Otherwise, how many times do we need to see attempted rapes (I shit you not, there are TWO within the first five minutes) or Kobunji cough up blood? WE GET IT! MOVE ON.

This wasn’t just an exhausting film to sit through, it was also a very disappointing ending. Granted, I can’t say these films were as exciting as the “Zatoichi” or “Lone Wolf and Cub”, so I’m not saddened that it ended prematurely. But I did want to see Jokichi’s story get resolved somehow….or was that the intent? Kazuo Ikehiro exploits many clichés, but he also seemed intent on destroying them with these films. Maybe the ambiguous ending of “Slaughter in the Snow” was telling us that vengeance was not going to be on the menu. But that doesn’t help curb my disappointment. I was left wanting more, as the films accomplishments were pretty impressive. “Slaughter in the Snow” isn’t a bad movie. It’s technically well made, but it’s just kind of boring and that made me numb to its strengths.

Violence: Rated R. There are a lot of blood geysers.

Overall: “Slaughter in the Snow” is worth watching if you liked the previous two, but don’t expect much. If you disliked its predecessors, I wouldn’t bother with it.