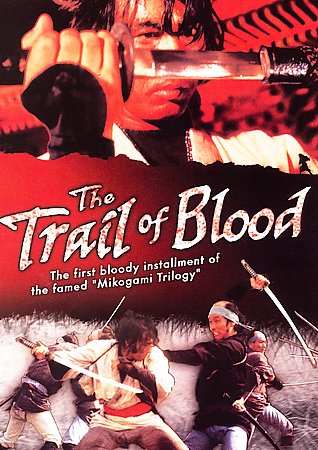 Plot: Jokichi of Mikogami (Yoshio Harada) is a wandering swordsman who decides to retire and settle down into a family life. Unfortunately, old enemies murder his wife and child, so he must get revenge.

I will never be able to watch ALL Samurai films, but I do feel like I have run out of good action-samurai movies to explore. Then “Trail of Blood” strutted into my life, wearing an eye-patch and carrying a sword, his swag causing me to clasp my hands against my chest in wonder. It rescues me from the gang that is known as ‘Samurai melodama’, but deep down, I know it will never settle down with me. As I watch him walk away into the sunset, the last image I see of this wondrous warrior, is him tripping over his own feet and falling into the dirt, face first. That, of course, is a metaphor for the movie itself. “Trail of Blood” is a decent film, but there’s something erratic about it. It’s strengths and weaknesses are constantly crossing swords with each-other, but every time one begins to overpower the other, it turns out to be a ruse and the tides turn. But who won? For me, the battle is still ongoing.

The first thing we shall discuss is the story. There are plenty of familiar plots to be found within this genre, each complete with their own cliches and conventions. There’s nothing wrong with embracing one, as long as the execution is sound. Yet “Trail of Blood” boldly throws its head back and laughs heartily, declaring that it will contain all of these stories and conquer each of them. Let’s go ahead and list them. 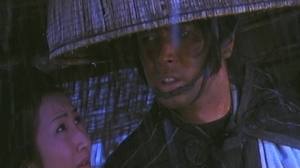 1) Jokichi is a wandering swordsman who has developed a nasty reputation, enough of one so he’s constantly being attacked by anyone out to make a name for themselves. When he reveals his name to some gangsters, they quiver in fear, knowing his reputation. When he stumbles upon a kind prostitute, who is being accosted by said gangsters, he comes to her aid. Unfortunately, a mundane injury has left him weakened and now those gangsters are after his head. He and the girl must escape. This is enough of a story to fill a complete movie, yet it’s actually the first 15 minutes of “Trail of Blood”.

2) Jokichi and the woman escape and fall in love, causing Jokichi to renounce his ways and make an honest living. They have a son and he becomes a craftsman. Unfortunately, business requires him to return to the town of the gangsters and he is immediately recognized. He’s beaten, humiliated and tortured, but makes a point not to fight back. He has a family to think about, after all. This is another familiar story. Samurai and Ronin are always finding love and trying to retire, but the laws of drama demands them to pick up the sword once more. I’ve seen plenty of movies about this, but it accounts for 15-20 minutes of “Trail of Blood”.

3) Predictably, his wife and child are killed. Now that he has no reason to follow the path of peace, he picks up his sword and declares vengeance. He immedaitely learns that three people orchestrated the death of his family and decides to start with the gangster he’s most familiar with. During the attack, he confronts an eye-patch wearing samurai who feels obligated to defend the bastard from Jokichi. The rival ronin is a long running trope within this genre and the described story makes up for 90% of samurai films out there. But it only eats up 15-20 minutes of screen-time for “Trail of Blood“.

4) Jokichi fails and barely escapes with his life, but things are about to become incredibly complicated. Jokichi rescues a woman from a gang known as the ‘blue demons’, who had just killed her husband. However, before he can really get into the action, a swordsman (nicknamed Tengu) takes them all out. Unfortunately, the slain group were a small part of a much larger gang and they want revenge (“Assault on Precinct 13” style). Jokichi and Tengu must defend the Inn they are staying at and crush these bandits. Did a totally seperate movie just invade “Trail of Blood”? Focus, movie! Focus!

5) Jokichi discovers the location of another one of his planned victims and aims to take him out. From here, the movie deals with the inner workings and politics of these gangs. Although with that said, this is not something “Trail of Blood” lingers on. Jokichi has earned the respect of a prominent member of the clan, who supports Jokichi, but isn’t sure how to approach the situation. From here, one can expect plenty of betrayals, reveals and bloodshed.

That’s five movies worth of story and do you know what the real kicker is? It doesn’t even finish. By the time the credits roll, Jokichi is only a third of the way into his revenge. Yup, “Trail of Blood” is the first entry in a trilogy. I find that incredibly amusing. As expected, because there are so many divergences and subplots, there isn’t a whole lot of development. Jokichi and the prostitute fall in love immediately, so we don’t understand the basis for that relationship, Jokichi develops and regresses so swiftly that we never really decide what kind of person he’s supposed to be. He’s apparently a decent guy from the beginning, as he does try to avoid bloodshed. But the way everyone talks about him, you almost wonder why his reputation is so notorious. The ‘rival swordsman’ occasionally re-appears, but it’s such a light touch that you wonder why he was a necessary addition to the plot. I watched this with my Father and when Tengu first shows up, he asked: “Who is this guy now?”. By that point, we had been introduced to so many characters and scenarios that it threw us off guard that there would be another one. Everything ties together by the ending, but it feels like an ass-pull. It opens up plenty of plot holes and raises way too many questions. I’d easily forgive most of the films trespasses, but the ending is when “Trail of Blood” literally falls on its face.

Luckily, the convolution of the script is softened by the strong performances of the actors. Everyone does good, but Yoshio Harada really deserves credit for making such a poorly written role seem deep. When we first meet him, he’s a dignified ronin who expresses irritation at his would-be assassins for interrupting his sleep. He’s not as crude as Mifune’s “Yojimbo” character, but he’s not as sophisticated as Mifune’s ‘post-transformation’ Musashi from “Samurai“. While we don’t get many interactions between him and his family, there is a genuine warmth that makes you care for them, even if they are thinly written. When he’s enduring the humilation of the gangsters, you can’t help but admire his inner strength. When he’s furious, he’s terrifying. Yet “Trail of Blood” delivers many scenes of him looking sad, remembering the fate of his families. There’s a level of humanity to the character that’s often absent from the genre, solely due to Yoshio Harada’s performance. For this reason, I was able to overlook most of “Trail of Blood”‘s story issues, with the exception of the ending.

The direction is a little difficult to pin down, because there is something inconsistent about the cinematography. Sometimes the movie looks downright shoddy and low budgeted. Other times it’s gorgeous, filled with plenty of creative shots. The locations usually look nice and the costumes were pretty vibrant. Many have complained about the color scheme (why do the faces look so red?), but I thought it provided an interesting aesthetic. The score is very eccentric, often reminding me of a spaghetti western and it compliments the directorial style (which seems to have drawn influence from those kinds of movies) nicely. Kazuo Ikehiro uses plenty of close-ups, which was wise considering how much emphasis is put on the actors. The editing is a bit crude, with a lot of abrupt cuts. But when it works, I thought it magnified the intensity. We briefly see the nasty fates of the wife and child, but the film will occasionally flash to a brief image of that grisly shot. It’s very unsettling- showing enough to be disturbing, but not to the point of becoming sleazy- and is used to express Jokichi’s sorrow and rage. It adds a lot to the dramatic tension. I also liked how the camera lingers on the resident widowers, while a couple has sex in the other room. It used sex as a tool to explore the characters. The fights are solid, but unexceptional. Fighters swing their swords wildly, occasionally producing blood spurts. There is nothing ‘clean’ about the combat, with even skilled warriors using kicks and fingernails (!!) in order to bring down their opponents. Speaking of which, Jokichi sharpens those nails enough to be deadly weapons and while that’s pretty creative, it’s also insanely silly. I’m pretty sure I wasn’t supposed to be laughing when he whips those bad boys out. “Trail of Blood” is relatively ambitious when it comes to the scope of the action scenes, having its characters take on a large number of people. Perhaps most noticeable, it never goes on too long without an action sequence taking stage. The director did a good job staging and framing the battles, but their almost animalistic edge made them seem a little sloppy.

“Trail of Blood” is covered in battle scars and wields a cracked blade, which this warrior is only moderately skilled with. It has been beaten and brutalized by my better judgement. But more importantly, it won the battle for my enjoyment. Is it flawed? Absolutely. Is it good? Not really. But did I have fun? Damn straight! I had a blast teasing it, pointing out its odd quirks and failings, but these faults add a certain level of character to the movie. Its weaknesses grew on me, although the ending didn’t. But that’s not to say that it’s ‘so bad-it’s good’. There is a lot of admirable stuff within “Trail of Blood“, primarily the acting. It also moves at a swift pace, something that’s incredibly rare in this genre. “Trail of Blood” is often compared to the “Lone Wolf and Cub” films and for good reason. Both straddle the line between respectable and exploitive. Whereas “Lone Wolf and Cub” usually leaned towards respectability, “Trail of Blood” is probably the opposite. This is ironic, as it’s not as gory as that franchise and I doubt the director intended for his movie to be considered ‘exploitation’. I originally awarded “Lone Wolf and Cub: Sword of Vengeance” 2.5/4 stars, but I’m beginning to feel like it should’ve been a little higher. I’d say it’s easily the superior film, but “Trail of Blood” is the definitive 2.5/4 star movie when it comes to samurai-actioners. And yes, I am completely aware that Jokichi isn’t an actual samurai. But referring to the genre as ‘Chambara’ is just a bit too obscure for my tastes.

Nudity: Oddly, I didn’t catch anything specific. Surprising, considering the amount of attempted rapes and sex.

Overall: “Trail of Blood” is worth a watch if you like bloody, action-oriented samurai features, but don’t expect anything great.