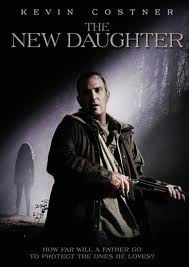 Plot: John (Kevin Costner), a recently divorced writer, buys a big house deep in the woods in order to bond with his children. This is especially difficult with his daughter, Louisa (Ivana Baquero), who likes to bitch with everything. But when Louisa becomes a little bit bitchier than before, he begins to get concerned. He has a good reason to be, because something appears to be possessing her and it has something to do with an old burial mound. What is lurking around his house?

I’m still not totally sure how I feel about “The New Daughter“. This is the type of movie that I complained about when I reviewed “Wicked Little Things” and “Dark Mirror“. It is so by the numbers and conventional that you almost start to wish that it was atrocious so you could actually feel something about it. Instead, we just have to wallow in its mediocrity. The big shocker is how they somehow roped Kevin Costner into participating in something so blandly forgettable. Even with his notorious flops, I could see their appeal beyond monetary gain. This is one of those films where as soon as you see the cat, you will know that it will be the first to perish. When someone has to die, there will be a conveniently placed side character. The most damning complaint though has to surround the children, especially the daughter. Why do horror movies hate the teenaged daughters whom we’re supposed to care about? They’re so bitchy that you start to wish that child abuse was acceptable. They just whine and complain. Louisa is even worse because she keeps reminding John that he’s a terrible Father when throughout the majority of the movie, John goes out of his way to be the best parent he can. I hate these kinds of characters, but every film like this seems to want one. But then “The New Daughter” has the audacity to actually become interesting during its final act. How am I supposed to rate something like this?

The script was written by the same guy who penned “The Haunting of Molly Hartley“, my least favorite movie of its respective year. It had some big and dark ideas, but used conventions and cliches to explore them. “The New Daughter” suffers from this problem but to a much less aggravating extent. It deals with themes such as puberty, parenthood and there’s even some Freudian stuff going on. Sometimes the film is rather clever about it, although other times the attempts at symbolism are gag inducing. The whole “ant farm” parallel was heavy handed and unnecessary, like the writer was begging his audience to think of the movie as deep. But while I liked its ambitions, they would’ve worked so much better if they were placed in a set-up that wasn’t so standard. You will be lucky if you notice the themes while watching “The New Daughter” because more than likely, you will be distracted by how familiar everything seems. You will wonder where you’ve seen this concept, these characters and their situations before. There were times when I was facetiously asking myself whether I was watching a remake to “Hide and Seek” (Robert De Niro), which was also unoriginal. They certainly want you to think the movie is unique. They refer to the demons as ‘gods’, even though they’re just monsters. That is not being creative, Mr. Screenwriter, it is playing dress-up with names. 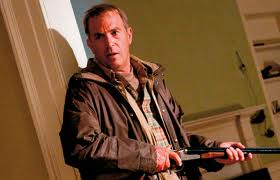 I was pretty bored with the feature, even though the director would occasionally provide an interesting shot. Then the ending came and everything changed from there. The movie ceased being about Costner looking confused or the daughter being a brat, but suddenly became about a family struggling against bloodthirsty monsters. MONSTERS! YAY! Holy shit the monsters look awesome, even when the lighting often works against them. They’re ugly, creepy and are only CGI when they’re doing something impossible. Even when they are off-screen, the roaring would get under my skin. So imagine my pleasure when the focus shifted to Costner wielding a shotgun and fighting off these monsters. AMAZING! Everything about the ending made me feel warm and gooey from the inside, from the morbid sets to the numbing tension. Sure, the PG-13 rating probably softened the picture, but I was into it. I even liked how the ‘parenting’ issue was resolved. John’s choices were actually sort of moving.

Sadly, it was just too late. No matter how grueling the finale might be, when you’ve spent the majority of the movie bored and annoyed, you’re not going to be able to forgive it for past failures. “The New Daughter” isn’t incompetently made, even though it doesn’t really explain a lot of things. It’s just…sort of there. The exciting ending only amplifies how boring the rest of the film is. The cast is pretty good and I have to give it to Kevin Costner for not acting like this material is beneath him. This isn’t one of his more inspired performances, but he does as well as the thin part allows. I just wish that the writer and director found more ways to keep me interested than relying on overdone melodrama. If only the 1st and 2nd acts were on par with the 3rd…

Violence: PG-13, but there is one surprisingly gruesome moment.

Nudity: None, although the daughter seems to have some weird, incestual feelings for her Father. She’s naked a few times, but you never get a glimpse of anything explicit.

Overall: I am going to reluctantly suggest you give “The New Daughter” a viewing because the ending is pretty cool. But keep expectations low and if you have a netflix queue, it’s not worth immediately bumping to the top.