Plot: Detective Campbell (Keenan Ivory Wayans) is hunting for a serial killer known as the Family Man, because he annihilates entire families. But when he acquires a new partner in the form of mysterious and eccentric Jack Cole (Steven Seagal; who is the main character, really), they will uncover a much more sinister plot.

Of all the older Steven Seagal movies, “The Glimmer Man” seems to be the one everyone has forgotten. It lacks the respectability of “Under Siege” or “Out for Justice”, but it also lacks the infamy of “On Deadly Ground” or “Fire Down Below”. Throughout my viewing of “The Glimmer Man”, my thoughts alternated between confusion as to why this movie didn’t have a stronger following and confusion as to why this wasn’t as reviled as the other two travesties of Seagal’s earlier career. “The Glimmer Man” is a strange mix of entertainment, train wreck and mediocre, all bundled up nicely into one little misfire.. I guess that’s why people tend to forget about it. It’s not as oppressively awful as some of Seagal’s films tend to be, while it’s not good enough to warrant a viewing.

I will admit that initially, “The Glimmer Man” provided me a…glimmer…of hope. I had never seen it before, so imagine my surprise when it was shaping up to be a serial killer killer, sort of like “Se7en”. Steven Seagal Vs Serial Killers? F@CK YEAH! But then it began to shift into…buddy cop territory? Okay…Those two kinds of genres do not go very well together. So if you figure there’s going to be some serious tone issues…There is some serious tone issues. You’ll go from a morose, grisly crime scene investigation to Keenan Ivory Wayans tasting moose dick. The mood whiplash never really stops either. Even during the finale, something dark and dramatic will be followed by something silly. But as baffling as this could be, I would’ve been fine with it. After all, Seagal had never done any serial killer thrillers or buddy cop comedies, so it was nice seeing him do something different. Unfortunately… 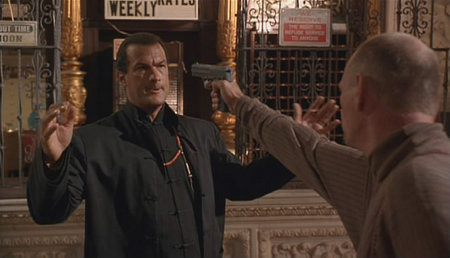 Unfortunately, as time moves along, you begin to realize that “The Glimmer Man” is the same old shit we’ve seen in all of Steven Seagal’s films masquerading as something new. The serial killer becomes a subplot whose purpose is to set up a real plot, involving…guess what? A rich old dude smuggling weapons of mass destruction. Steven Seagal is always fighting rich old dudes in his movies…Oh, and what is this? A Government conspiracy? Oh, Steven Seagal isn’t just an ordinary cop who practices Buddhism, but he also has a shady military past? Aw, they even have the “First Blood”-esque ‘he’s so freaking badass’ speech, even though the villain who gives it never seems to take Seagal’s character seriously. So yeah, underneath this fairly cool premise is a generic Steven Seagal actioner. The fact that it teased us with being something a little different is frustrating.

The buddy cop angle is arguably even more aggravating. Why? Because Steven Seagal and Keenan Ivory Wayans actually have genuine chemistry. Seagal’s acting might not be very good, but he’s obviously having a lot of fun and that really does show on-screen. I just wish he wasn’t playing the always perfect man-god who wins every fight, solves every riddle and makes his co-workers look like useless bitches in comparison. Keenan Ivory Wayans tries his hardest to entertain you and even if it often backfired, I thought he was able to hold his own against Seagal in terms of his screen presence. He has some funny moments and I could even buy him as a badass, even though his fight scenes looked awkward. The humor tends to fail more than succeed, primarily because the movie is trying way too hard to be amusing and it comes across as forced. It’s also trying way too hard to be quotable, which ends up being amusing for the wrong reasons…But at least it’s trying? Still, I thought Wayans and Seagal worked well together. The problem is that during the 2nd act, it becomes a typical Steven Seagal-centric movie. When it does show Wayans, he’s either not with Seagal, or he’s being hostile. But generally, they only share a significant amount of screen-time during the 1st and 3rd acts. 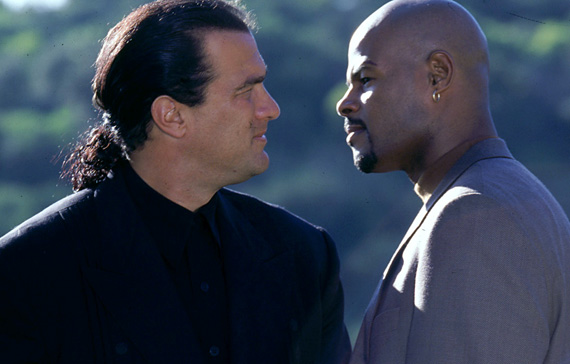 So what does the movie do right? Well, the production values are nice. This was back when Steven Seagal could command respectable budgets. I thought it was reasonably well paced. Even though the narrative is a bit of a mess, it’s never brought down by a love story or any of that kind of shit. It’s always attempting to be suspenseful or funny, an action scene is always around the corner and the plot advances at a steady pace. I can’t say I was totally invested, but at least I was never bored. The fight scenes were pretty impressive, considering Seagal was always more about the violence than choreography. The direction is competent when the tone isn’t being considered.. None of this makes “The Glimmer Man” worth watching, but it does make it tolerable. As I said, “The Glimmer Man” isn’t bad using the traditional definition. But its mistakes keep me from being able to recommend it.

Overall: “The Glimmer Man” is…odd. But it’s not daft enough to warrant a viewing. Still, if you choose to watch it, at least it’s not terrible.