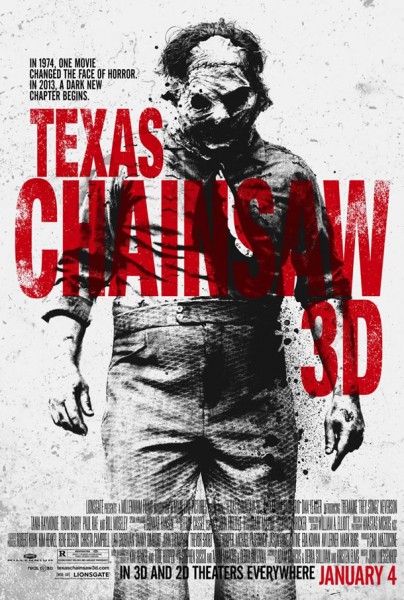 Plot: Heather (Alexandra Daddario) discovers that she was adopted from a (now deceased) family in Texas and has inherited their property, so she decides to check it out. She gets a mansion, but it comes with a chainsaw wielding maniac who likes to eat people.

You know your franchise fucked up when the majority of its entries try to pretend that the previous sequels didn’t exist. “Texas Chainsaw 3D” is the latest movie claiming that it is the ‘true sequel’ to the original classic. The only fans who should be excited by this news are the stupid ones, as this is the THIRD time the filmmakers have tried to justify this. I have to imagine that many younger viewers will be confused too, as they might be more familiar with the “2003 remake of the same name“, but who am I to ponder the idiocy of the studios? “Texas Chainsaw 3D” is also the latest entry within the franchise to suck. Shocking. In fact, it’s most redeemable asset is that it came out after “Texas Chainsaw Massacre: The Next Generation“. So you can breathe a sigh of relief and know that as bad as it is, at least it’s not “Texas Chainsaw Massacre: The Next Generation“. Sadly, that does amount to something.

The first 30 minutes or so are dedicated to fleshing out our characters. This could’ve been a good thing, but that would’ve required the writers to actually know what the fuck they are doing. Who are these people whom we are supposed to root for? Well, Heather is dating Ryan (Trey Songz; worst…stage name…ever), who had an affair with Heather’s best friend, who is currently dating his best friend. Despite Ryan trying to push her away, he gives into temptation and…am I watching a fucking Soap Opera? How is it that the only marginally sympathetic character is the disposable boyfriend of the slutty best-friend?! As for Heather, she’s pretty much a watered down version of the protagonist from “Texas Chainsaw Massacre: The Beginning” (funny name, considering its continuity died with that movie), who herself was a watered down version of Jessica Biel’s character from “The Texas Chainsaw Massacre (2003)“. When she does start to stand out and develop, it’s…for the worst. The acting is acceptable when the actors are conveying normalcy, but when they start to go insane or are revealed to be evil, they become cartoonishly over-the-top. I like to think that the franchise just went full circle with the first sequel being silly and the last one being silly too. But more than likely that was unintentional and “Texas Chainsaw 3D” is just a shitty movie. It’s weird seeing Scott Eastwood though, as he looks identical to his Father (Clint) when he was younger. Too bad he didn’t inherit Daddy’s talent, although he might get better as he acquires more experience. We’ll just have to see. The worst performance came from the best friend, who oversells her sultry demeanor to a point where she seems to pose sexily even when she’s just standing around. Oh yeah, did I mention that not only is this cast unlikable, but everybody is incredibly stupid as well? Characters do retarded things just so they will be killed off with less difficulty, or it will be done to drive the story. My forehead received excessive bruising from the constant face palming. 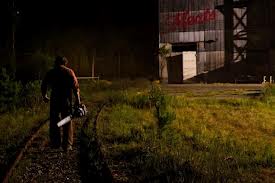 Once the killing starts, it’s more-or-less a rehash of what we got in the original. A character will wander into Leatherface’s domain and experience the same kinds of deaths that happened before, except they’re gorier. Apparently the director forgot that it only worked so well in the 1974 film because we weren’t sure whom the protagonist was. That created suspense. “Texas Chainsaw 3D” makes it clear who is going to die and when, without ever trying to subvert our expectations. Therefore, instead of biting my nails in fear or anticipation, I was impatiently waiting for the movie to get to the money shot. There was only one surprising fate, but it seems to be because the film forgot about that person. I wouldn’t be surprised if their death was edited out. The attempts at building the characters seem wasted because the majority of the victim fodder is wiped out within a short time span and the movie ended up prematurely climaxing. I thought the ending was near but alas, there was another 40 minutes to go. While the gore is pretty good, it’s not really the bloodbath I was hoping for. We’re constantly teased with something awesome, such as Leatherface going to a Carnival, but then he doesn’t do anything spectacular there. It’s definitely a slasher, but the slasher elements aren’t present enough to sustain a full movie. But even though the characters blow and the suspense is absent, the worst has yet to come…

Up until the third act, the film was bad, yet not offensively bad. It was a subpar slasher filled with subpar slasher problems, but the ending was downright atrocious. I can’t spoil anything, but let’s just say that Leatherface is turned into an anti-hero. Now, you could argue that Jason and Freddy became anti-heroes too, but I disagree. Even though the victim fodder became more prominent in their movies and the monsters earned more screentime, they were always the villains. ALWAYS. Occasionally they would target a victim who deserved their wrath, but we weren’t supposed to root for them. They killed too many innocent people! By the time “Texas Chainsaw 3D” concludes, it becomes apparent that we were supposed to be cheering for Leatherface as he slayed everyone. It totally forgets that he killed at least four innocent teenagers in the original. Hell, even these jackasses didn’t deserve what they got. I usually wouldn’t bring the moral implications up, but “Texas Chainsaw 3D” criticizes vigilantism. What Leatherface and his cohorts did was FAR WORSE. I can’t go too much deeper without spoiling, but everything about the finale left me fuming. 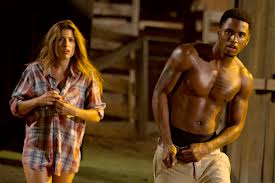 What about the 3D? I will concede that it occasionally boosted the intensity of the situation (the coffin bit, my favorite scene in the movie) and they sometimes would throw something at the screen. It’s just too bad that they didn’t do more of that, although even if the 3D was exceptional, I’m not sure if I would still want to pay more money for this. As it is, it’s okay. “Texas Chainsaw 3D” isn’t unwatchable, but it’s not worth watching either. It’s never a good sign when your fellow audience members are laughing at parts that are supposed to be scary. But let’s face it, “The Texas Chainsaw Massacre” shouldn’t have been a franchise in the first place. The original was practically a fluke, complete with minimalist direction, simplistic writing and amateurish acting. Yet its strengths and weaknesses somehow combined to create lightning in a bottle. You just can’t recreate the magic of a movie that was good for unconventional reasons, which is likely why the majority of the sequels pale in comparison. Yet horror fans- such as myself- will see “Texas Chainsaw 3D“, regardless of what anyone says. After all, the saw is family.

P.P.S: Marilyn Burns has a cameo as the dead grandmother, which I thought was bizarre. You see, Burns played the heroine in the 1973 film and they show footage of her from that. In essence, she’s playing two different characters in the same movie.

Nudity: None, which is irritating because they keep teasing us with these ‘almost naked’ scenes. “Texas Chainsaw 3D” is such a tease.

Overall: “Texas Chainsaw 3D” is bad, but let’s face it, followers of the franchise will still watch it. I’d personally wait for DVD, but as I just saw it in the theaters, I can’t look down upon you if you decide to tackle it on the big screen. If you’re not one of us fanboys, don’t bother.