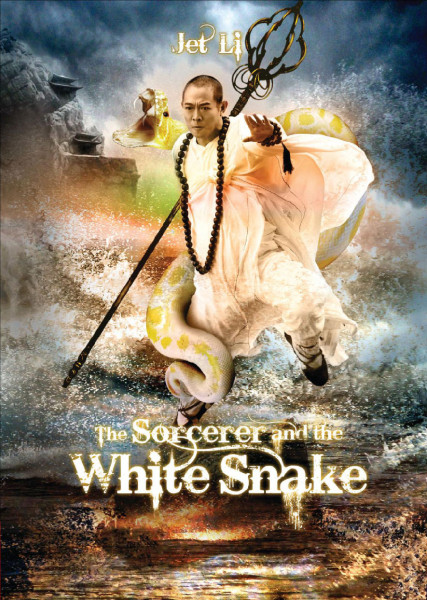 Plot: White Snake (Shengyi Huang) is a demon who falls in love with a herbalist (Raymond Lam), which leads to them becoming married. But a powerful monk named Fahai (Jet Li), who believes that demons and humans can’t be together, has every intention to stop this union. Calamity ensues.

Before I get into the actual review, I’d like to point out that you shouldn’t be fooled by Jet Li’s presence. Yes, he is one of the main characters and yes, he occasionally will use some kung fu. But “The Sorcerer and the White Snake” is primarily a fantasy film, so expect a crapload of CGI. It’s used for the settings, the various demons and it even drives 95% of the action. In a way, I’m reminded of Andrew Lau’s films from 10 years ago, such as “The Storm Riders”, “The Duel” and “A Man Called Hero”. Except unlike those films, there isn’t a lot of creativity when it came to the visual effects. Characters will use their powers to mentally hurl stuff at their enemies, or maybe they will transform into something. I now have a new respect for “The Storm Warriors“, which might’ve been awful in terms of storytelling, but at least the filmmakers had fun designing all of the various CGI superpowers. The action here is just lazy and uninspired. The majority of the demons merely resemble various animals, such as foxes or snakes. The exception is the bat demon, which looks like a reject from “Daybreakers” because the makeup is really bad, possibly even worse than the majority of the CGI. I could’ve forgiven the shoddy CGI work if the gimmicks were at least unique, but “The Sorcerer and the White Snake” seems intent on not leaving an impression on the viewer.

Initially, the CGI looked okay. It’s never especially convincing, but there is a certain aesthetic appeal to the visuals. At least whoever designed these sets went out of their way to make everything pretty, even if the locations would’ve felt more at home in a Playstation 3 video game. Furthermore, the talking animals at least somehow managed to have personalities, even if said personalities were rooted in clichés (example, the tortoise talks slowly). But even those paled in comparison to Hollywood efforts, such as those “Chronicles of Narnia” movies. The talking animals here look like they transported Pixar animations into a live action movie. The end result just looks more weird than bad. But as time goes along, the effects start losing their limited appeal. They get shoddier and shoddier until the ending. But more on that later.

I will admit that the actors often overcame the flimsy screen-play. They had a certain charm and their chemistry felt genuine. I liked how the snakes were pranksters, which lead to some cute interactions. I was a little saddened that Jet Li wasn’t given much to do except be stern, but the man has enough presence to make up for that. Because “The Sorcerer and the White Snake” removed all of the intriguing aspects of the “Green Snake” script, there isn’t much to say here: good or bad. The two main characters (the herbalist and white snake) fall in love for no reason, but at least it felt like general attraction throughout 80% of the film. It’s only during the ending, where we’re supposed to believe it’s anything deeper, that the shallowness becomes a problem. There’s plenty of sappy dialogue during these scenes that take up a lot of screentime, but none of it has any substance. There’s a little subplot involving Green Snake (Charlene Choi) and a monk who is turning into a demon (Zhang When), which takes up enough screen-time to feel like padding, but not enough to where it adds anything. It’s also resolved in an abrupt and anti-climatic way.  The moral ambiguity of the characters is still present, but it’s handled horribly. In “Green Snake”, you felt that despite everyone’s good intentions, they were all going about it in the worst way possible (it should be noted that there, Green Snake and Fahai were prominent than the lovers). Here, I honestly felt Fahai’s reasoning was sound, yet the movie acts as if we’re supposed to be on the side of the lovers…even though the snakes are willing to kill a shitload of people in the process. Otherwise, the script is just very fluffy. Everything that made “Green Snake” memorable has been replaced with conventional storytelling.

The director was Siu-Tung Ching, who did some great work in the 80’s. Hell, I’d even go so far to say “Duel to the Death” is one of my favorite kung fu flicks of all time. Unfortunately, like many past greats, his talent seems to have diminished within the past decade. Hell, he even directed a Steven Seagal movie…which is the rock bottom below the actual rock bottom. Although to be fair, “Belly of the Beast” was one of the better DTV Seagal flicks and no, it is not about the exploits of Seagal’s stomach. Unfortunately, his work on “The Sorcerer and the White Snake” flat out sucks. Maybe it’s because he wasn’t used to relying on the CGI to this extent, but he never could bring out the right emotions from me. When he’s trying to create a deep or inspiring scene, it’s just too corny to take seriously. When the scene is intended to be comical, it’s forced and annoying. When it wants to be sad, it’s so heavy handed that I laughed. The romantic scenes work better than the others, if you forget at how poorly developed the love story is. Oddly, his worst moments tend to be when he tries to make a scene sexy. Whether it’s the lesbianish frolicking between the snakes (maybe I’m a perv, but those sisters were a bit too touchy), or the demon foxes attempting to seduce Fahai, it’s never very sexy. In fact, it’s just kind of weird. The editing, mixed in with the CGI and characters mannerisms only adds to the awkward oddness of it. What’s bizarre about Siu-Tung Ching’s presence is that he was known more for his bleaker movies, so I have no idea why he was chosen for a project as sunny as this.

Yet I have to admit, I didn’t hate “The Sorcerer and the White Snake” as much as my review suggests…at first. Because for all of its problems, it does succeed at being light hearted, harmless fodder. It is reasonably well paced, balancing action with drama and comedy nicely. As I said, the actors somehow made a lot of it work. But then the ending came around and “The Sorcerer and the White Snake” imploded under…well, a lot of bad CGI. I’d usually just say under its own weight, but that weight was Computer Generated Imagery, so…yeah. If I could tolerate the questionable effects earlier, if for the sake that they were marginally pleasant to the eye, the effects during the finale would embarrass a Scyfy original production. They’re bad. Asylum bad. I practically blushed and turned away awkwardly, as I was so embarrassed for Jet Li as he had to fight awful, giant snake effects. I complained about Hark Tsui relying too much on subpar CGI when he directed “The Flying Swords of Dragon Gate” (which also starred Jet Li), but even that looks polished compared to what “The Sorcerer and the White Snake” delivers during its finale. That alone firmly tipped this movie into ‘bad’ territory.

That’s really all I have to say. Even those who gave “The Sorcerer and the White Snake” a more positive review seemed very lukewarm. I can see why some viewers will find some enjoyment out of it. After all, it’s not boring- even if it does have four too many endings- and it does have a cutesy factor going for it. But that means at best, you might think it’s okay. Personally, I was unimpressed by the generic screen-play. It might even be worse for me because I’ve seen “Green Snake“, which used its story more effectively. Yet even the blandness of the script can’t stand against the might of the awful CGI effects. I don’t think I’ve ever seen a movie that displayed such crappy CGI this proudly. If I remember “The Sorcerer and the White Snake” for anything, it will be how the effects began as tolerable, but became progressively worse by the minute. By the third act, the film practically becomes unwatchable because the CGI was so terrible. If I want to watch a subpar fantasy-romance-kung fu flick with awful special effects, I’ll watch….well, another subpar fantasy-romance-kung fu flick with awful special effects, as long as the ending doesn’t suck like this one did.

Nudity: None, although there is some sexually charged imagery.

Overall: I didn’t like “The Sorcerer and the White Snake”, so I’d say don’t bother. But it does have Jet Li, so if you’re like me, you’ll watch it anyway.