(Written and Directed by Tsui Hark)

Plot: A corrupt, Eunuch Warlord (Kun Chen) closes in on the Dragon Gate Inn, which is harboring his enemies. Zhao (Jet Li), a heroic warrior who has vowed to stop corruption in the Government, bands together with the various clans who have come to the same location for different reasons. They must outsmart Imperial agents and confront the dangerous Warlord.

Before I begin my rant about “Flying Swords of Dragon Gate“, you should know that it is a remake of “Dragon Gate Inn“. I haven’t seen that film, but I did view the 1992 remake called “Dragon Inn“. I found it to be uneven, straddling clever and annoying while providing a band of martial arts that I don’t care for (lots of wire-fu). Yet now I find myself re-evaluating it, because compared to this new adaption, it was highly inspired and memorable. “Flying Swords of Dragon Gate” isn’t bad, but considering the talent involved, it’s pretty flat. The only thing remarkable about it is how unremarkable it is. Apparently the 3-D was pretty good, but I don’t have access to that technology when it comes to watching DVD’s, so I don’t know. What’s tragic is that all of Tsui Hark’s strengths seem suspiciously absent, as if he went from being an energetic, inventive youngster filled with inspiration and talent to an old man who is out-of-touch with what made him great in the first place. I suppose you can remake one of your classics, but can you recapture the same charm twice? Falling back on your older, better works is never a good thing.

I’m pretty sure that no actual sets were built for this film. Every scene reeks of digitalization and nothing feels real. Of course, I am exaggerating but “Flying Swords of Dragon Gate” looks like a very polished cut scene from a video game, albeit with live actors. This is acceptable with the wide shots, where we see fake gorgeous scenery and fake lavish locations. I might say ‘fake’, but they are pleasing to the eye. But when the excessive CGI finds its way into the fight scenes, it looks embarrassing. I am actually fond of CGI-fu when it’s utilized properly. I enjoyed “The Warrior’s Way” and “Ninja Assassin“, or if that’s too modern for you, I also appreciated Andrew Lau’s earlier films (like “The Storm Riders” or “The Duel“). The former two were more high tech, making the effects seem more believable while Law tended to be creative with the CGI. Tsui Hark just has characters jumping impossible heights, knocking unconvincing logs around and fighting in front of a green-screen that is showing a dust storm. Oh wait, that’s supposed to be a dust storm. Even “The Storm Warriors” had cooler visuals! I might complain about wire-fu, but at least “Dragon Inn” used it as it was supposed to be used. It worked within the context, but the CGI present in “Flying Swords of Dragon Gate” never blends seamlessly with the actors. When Jet Li flies into the air, I never believed for a second that Jet Li was flying in the air. It draws too much attention to itself, constantly reminding us that it’s a special effect. Tsui Hark revolutionized special effects in Hong Kong, so why do the visuals in “Flying Swords of Dragon Gate” already seem dated? Has he lost his touch? 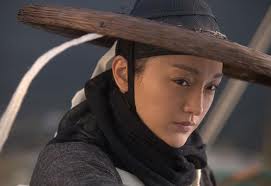 The script isn’t much better. Once again, I’m blown away by how much I must’ve underestimated “Dragon Inn“. That movie offered characters who actually left an impression on me. They had personalities- maybe even a bit too much- and I knew their motives. “Flying Swords of Dragon Inn” has a bigger cast, but it’s often difficult to tell them apart because they are so boring. The only people who stood out was a gruff, Tartar Princess (because of that crap on her face), Jet Li (because he’s Jet fucking Li) and the villain (because he was vaguely interesting, although Donnie Yen’s version was far more captivating). Everyone is so one dimensional that you can’t imagine them doing anything outside of what the plot demands of them. Jet Li’s character just seems like a typically serious badass. What does he do when he’s not opposing the Government? He probably practices the speeches he uses when opposing the Government. I’m a huge fan of Jet Li, probably even preferring him to Jackie Chan, but he doesn’t get anything to do. It also doesn’t help that he’s oddly absent during most of the middle block. Because the cast failed to engage me, everything became harder to follow. I was never confused during “Dragon Inn“, but I often didn’t know what the hell was going on in “Flying Swords of Dragon Gate“.

What saves “Flying Swords of Dragon Gate” from total cinematic damnation is its unusually fresh pace. Seriously, you’d think the combination of dull characters and lame action would bore me out of my mind. But honestly, I never became impatient or exhausted. Proper pacing is a difficult thing to accomplish because being too fast or slow tends to have the same result. The movie becomes exhausting. Yet “Flying Swords of Dragon Gate” struck the right balance. There might be a lot of dialogue, but the story seems to progress rather quickly and it seems like someone fights every 10-15 minutes or so. Yet it never is in a complete hurry to get itself over with. This made everything go down smoothly.

“Flying Swords of Dragon Gate” is flavorless, but edible. The bi-polar tone and humor of its 1992 predecessor has been completely removed and is replaced by heavy gravitas. This meant less cringe inducing moments, but also strips away everything that made “Dragon Inn” memorable to begin with. Hell, this film seems more interested in being a large scale epic, with the inn merely being a location where the final battle must take place. I prefer the more intimate, claustrophobic way the inn was used in the previous film. It was more about everyone trying to outwit their enemies without exposing themselves, whereas this prefers showing weak special effects of people flying around. It annoyed me much less than “Dragon Inn” did, but it was also much less rewarding. “Flying Swords of Dragon Gate” wasn’t a bad experience, but it’s already fading from my mind…like dust, in the wind.

Overall: You’ll probably watch “Flying Swords of Dragon Gate” if you like Jet Li or Tsui Hark, but don’t expect much. If those names mean little to you, then don’t bother, unless it happens to be on television.