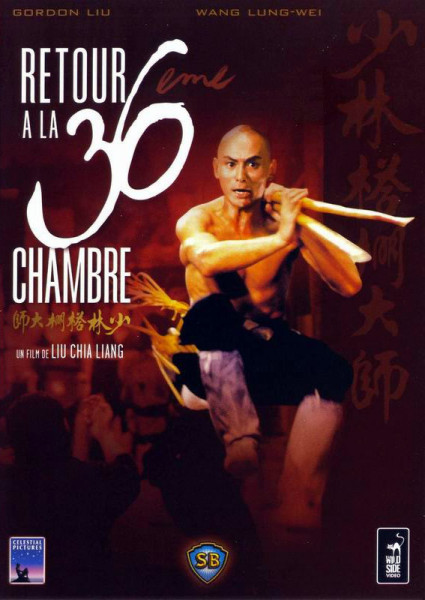 Plot: Chao Jen-Cheh (Gordon Liu) is a con-man who pretends to be the legendary monk, San Te. He’s hired by a group of factory workers to use his ‘skills’ to force the boss (Lung Wei Wang) into giving back owed wages, but the ruse was more transparent than he realized, as the boss sees right through him. After watching his friends get beaten up, he decides to become the real deal and sneaks into the Shaolin Monastery, where he will con his way into training under the real monk San Te (King Chu Lee).

“The 36th Chamber of Shaolin” is a highly regarded kung fu flick, often considered to be among the best examples of the genre. Of course, I have to be the only one who pisses on its parade by stating that it is one of the most overrated examples of the genre. Don’t get me wrong, it’s good enough to warrant a viewing, but I eventually got tired of its training montage sequence, which felt like it took up the ENTIRE SECOND ACT. To this day, I find myself sulking whenever I think of the movie because the fans bitch-slapped me with high expectations and “The 36th Chamber of Shaolin” bitch-slapped me for failing to meet those expectations. This was why it has taken so long for me to get to “Return to the 36th Chamber“, which is usually considered an inferior but worthy sequel. I just wasn’t interested. My eye brows were raised, however, when I realized that “Return to the 36th Chamber” was about as much of a sequel to “The 36th Chamber of Shaolin” as “Shaolin Temple 2: Annoying Kids from Shaolin” was to “The Shaolin Temple“. Even though they share the same writer, director and star, the characters are different, it’s not the same story or the same continuity…Or at least that’s what I thought…Because it had been so long since I viewed the original, I had forgotten that Gordon Liu’s character was named San Te. That character does return for this film, he’s just not played by Gordon Liu- who was recast for a new protagonist. That actually is a pretty inspired idea. “Return to the 36th Chamber” might lack the golden reputation of its predecessor, but I personally preferred it thanks to the goofy tone, the amazing martial arts choreography, the creative gimmicks and the fact that 80% of the screentime isn’t an exhausting training segment.

“Return to the 36th Chamber” does contain a lot of training and plenty of trial and error moments within the 36th Chamber, but they don’t comprise of the majority of the film. At first, I was sure I had accidentally rented “Disciples of Shaolin“- which doesn’t contain any actual Shaolin- because of the similar setup. The boss is a douche who pisses off his workers when he cuts their pay so he can hire Machu’s, who proceed to bully everyone. The first chunk of screen-time is dedicated to Gordon Liu parodying his role from the previous film by attempting to con the boss. I thought this was hilarious. Even though the movie falls victim to that stupid ‘fake buck teeth’ gag (Is that considered funny in China?), the comedy isn’t as noisy as some kung fu flicks were at the time. I thought the elaborate scheme was incredibly clever and Liu gets to showcase some superb comedic timing. Once he’s found out, then it becomes about him trying to sneak his way into the temple: Hijinks ensue. What I liked about this segment is how our hero gets to prove that he is a skilled con artist and watching his failures and successes as he tricks the monks is always entertaining. It’s very rare when an 80’s Hong Kong movie makes me laugh most of the time it wants me to. Usually it’s the awkward aging or the cultural differences, but I am not a fan of Chinese humor from that period. Yet here I was, chuckling the entire time while watching “Return to the 36th Chamber” and sometimes even laughing my ass off. Good times… 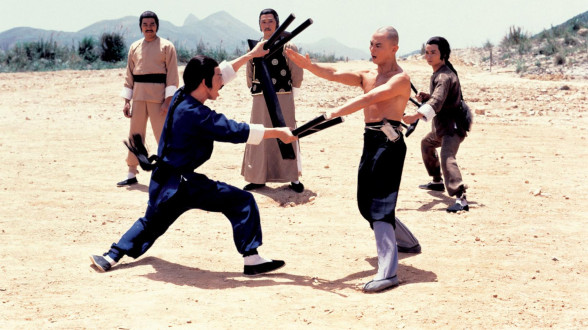 Once the training begins, I was awed by how creative the gimmicks were. Liu has to build a scaffold before he can study, but he learns to make that part of his training. Granted, it is kind of silly how strong Liu gets over a single night. Um, do kung fu directors know that muscle doesn’t build that way? Meh, they probably don’t care and I can’t blame them because it was a compelling sequence. I wouldn’t be surprised if the writer of “The Karate Kid” devised the entire ‘using chores to learn martial arts’ concept after seeing “Return to the 36th Chamber“, because they share the same idea. But besides being a unique way for someone to learn kung fu, this gimmick allows Liu to show off his physique and mad acrobatic skills. Hanging off a roof and dodging (while positioning) wooden beams is far more epic than painting fences. But this is also where the pacing comes into play, as it spends enough time on the training to allow for some awesome sequences, but it doesn’t linger for too long. I never got bored of watching Liu train this time around, whereas I did in the first one.

The martial arts choreography is still not comparable to what Jackie Chan could do at the time, but it is very good. The hand-to-hand combat is very fast paced, but the punches and kicks never look too soft. I like how even the lesser fighters come across as skilled, making Liu’s triumph over them mean something as it shows how powerful he has become. The finale is amazing because we get to see our hero defeat the enemies using…scaffolding kung fu? Yes, what he learned while working on the roof is directly incorporated into the fight and somehow it’s credible. He even gets to fight in a similar location against his more traditional opponent, using his roof-top skills to his advantage. Liu is constantly put into situations which allow him to show off his athleticism like that.. There are some odd touches too, like when the villains wield benches. I remember “The Young Master” (which came out the same year) also having a character use a bench as a weapon, so I wonder who ripped who off. Still, regardless of how absurd of a weapon it makes, it added a new dimension to the choreography. Liu seems totally thrown off guard by their presence and it’s compelling seeing the tide temporarily turn against him. In fact, I do like how as skilled as our protagonist has become, he continues to make mistakes. I won’t say the choreography is superior to the original, mostly because the original was an innovator, but it seemed like the fight scenes stood out more in this one. Whether it was the locations (great sets, by the way), the gimmicks, the weapons or the choreography, “Return to the 36th Chamber” just left a bigger impact on me as a kung fu flick.

If there is any criticism I can think of, it’s that the protagonist doesn’t really develop. That was one area where its predecessor outshines the sequel by far. While the foundations are filled with a lot of potential for development, it’s never really capitalized on. Gordon Liu’s character is very static, he simply ends the movie physically stronger than he did when he began. Maybe it was for the better though, as “Return to the 36th Chamber” is much more light hearted than “The 36th Chamber of Shaolin“. It’s breezier, sillier and in my opinion, much more entertaining. The fights might not be better, but they were used in more creative ways, which will keep them in my memory for much longer. But more importantly, I felt there was much more content within the screen-play. I do want to stress that as much as I bitch about it, I like “The 36th Chamber of Shaolin“. But that doesn’t stop it from being one big training montage- even if it’s a good one. I REALLY like “Return to the 36th Chamber” simply because more is going on within the story.

Nudity: None, although sex is brought up.