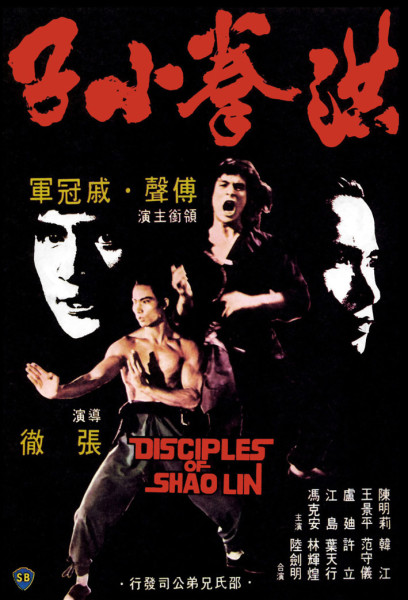 Plot: Guan (Alexander Fu Sheng) has traveled from a small village to a big city, in order to make a living. He gets a job working at a textile factory, which is currently in a violent feud with a rival company, and uses his masterful kung fu skills to become a success. But his elder brother/friend (Kuan-Chun Chi) warns him that this path can only lead to bloodshed, and…well, Guan may have bit off more than he can chew.

“Disciples of Shaolin” has nothing to do with the Shaolin Temple, Shaolin Monks, or Shaolin martial arts…In fact, I’m pretty sure the word ‘Shaolin’ never is even spoken throughout the duration of the film. This kind of marketing always cracks me up, although I suppose the original title- “The Invincible One”- is pretty dull in comparison. At least it’s not as daft as “Blood of the Ninja” or “Ninja Checkmate“, which not only lacked actual ninja, but proved that us silly westerners didn’t know the difference between Japan and China. Although nothing makes me smile more than remembering that awful Bruce Lee mockumentary which claimed Bruce was a descendant of a Samurai. If you’re wondering why I’ve spent an entire paragraph on this, it’s because “Disciples of Shaolin” only really stands out because of its title, which is strange considering how it’s certainly not ‘generic’. Fans have also claimed that this is a good example of the genre, maybe even one of the finest examples. I disagree. “Disciples of Shaolin” tries its hardest to balance comedy, drama, kung fu, tragedy and even romance, but everything is crammed in together so much that it becomes difficult to say the movie excels in any of those regards…Although it doesn’t fail either. The effort does sometimes pay off.

While it’s not as blatant as many of its contemporaries, “Disciples of Shaolin” can be considered a knock-off of Bruce Lee’s flicks. The plot borrows plenty of elements from Bruce Lee’s “The Big Boss”, from the factory setting to the corruption of the protagonist. When the story starts entering dark territory, it’s very reminiscent of the films of Bruce Lee. Yet the comedic antics are more akin to a Jackie Chan movie, which is funny because Jackie Chan had yet to achieve stardom. Actually, that might be an oversimplification because while “Disciples of Shaolin” is pretty silly, it is rather restrained compared to what would become a trend in the 80’s- over-the-top wacky antics, mugging, physical comedy, etc. “Disciples of Shaolin” did make me laugh more than not and I was never bothered by the tone. At first, Guan’s goofiness is rather endearing, but over time, it becomes somewhat depressing as he turns into a bully with those same mannerisms.

“Disciples of Shaolin” isn’t very action packed, considering its genre, instead aiming to be more of a tragic drama. Alexander Fu Sheng does a superb job in the leading role, showcasing a lot of personality, martial arts skills and he even portrays his rise and fall very effectively. But let’s face it, there isn’t enough time to flesh out all of this drama. When he starts to become big, he has a love interest, but overtime she’s just dropped from the story, being replaced by another love interest. Her replacement has greedy intentions at first, but comes to love him, but that subplot isn’t explored enough to really matter. His brother/friend (depending on the translation; played by Kuan-Chun Chi) becomes increasingly more hostile to Guan as he disapproves of his actions. But their friendship is glanced over, so even from early on, it seems like he DISLIKES Guan based on how he acts towards him. All of these subplots and relationships devour a lot of screentime, but not enough to where I cared. Even worse, the core dilemma is very rushed. In one scene, Guan is still his likable self. The next, he’s an overgrown bully who has become his predecessors. Fu Sheng’s performance does make up for this to an extent, but there is a reason why most kung fu flicks should stick to kung fu. I will praise the film, however, for being ambitious when it came to the screenplay. It has plenty of big ideas and tries to create an interesting cast of characters, even if there isn’t enough time to use them to their fullest. “Disciples of Shaolin” is one of those films that has a little of everything, but not a lot of anything. I usually prefer my films to have a lot of something, but that’s just me.

The action is…okay. I’m confused as to why so many reviewers are praising the choreography, when I thought it was rather standard. But the fights themselves felt rather rushed, like there wasn’t a lot of time to rehearse. I noticed A LOT of missed cues and characters stances were continuously dropping. Everything about the action felt more staged than natural, and fairly sloppy. On the flip side, I felt Fu Sheng made everything click. Something about his presence made all of his battles quite engaging. During the finale, when he has to take on a bunch of villains even though he’s seriously wounded, I was surprised at how emotionally involving it was. I did find it odd that despite him saying his friend (Kuan-Chun Chi) was a superior fighter, it doesn’t show when he actually fights. Kuan-Chun Chi has a better build, but his movements looked stiff compared to Fu Sheng’s. I also felt the villains were too weak, having to resort to cheating in order to provide a threat to our hero. Maybe this is just my personal tastes, but I usually prefer antagonists who are at least AS killed as the hero, if not superior. Then again, “Disciples of Shaolin” is unconventional in that it is more about internal conflicts than external. The villains only really represent facets of their development. So in Guan’s case, his abilities are eroding his character, slowly turning him into a womanizing drunk. The antagonists are just there to lose, boosting Guan’s ego and leading him to the path of self destruction. 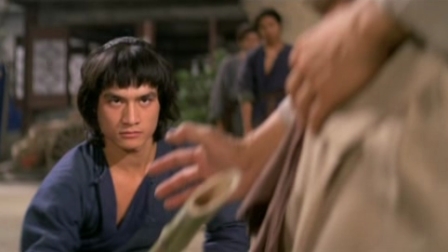 I think my favorite part of the film was the score, which I suspect was illegally taken from other works because it did not sound Chinese at all. Whether it was being sad, funky, inspiring or intense, the music was very eccentric and I wish I could find those songs. While Cheh Chang overuses that grassy knoll location during the battles, the sets were nice to look at and the final battle was amazing. The choreography went from standard to superb and its execution was better. The removal of color was an interesting touch by the director. I’d usually say that is an unnecessary gimmick, but “Disciples of Shaolin” made it work. It helped hit home that this scene would probably end in tragedy. I’d say “Disciples of Shaolin” works better in parts than as a whole, but those ‘parts’ are really good.

“Disciples of Shaolin” is too unrefined to be accepted as the ‘work of art’ that it wants to be, even though it has moments that I believe would even impress legit critics. It does have an emotional core, but it manages its time rather awkwardly, so the majority of the characters and their relationships weren’t fleshed out enough to be worth it. But they also take up time from the action sequences, which weren’t especially phenomenal to begin with. Yet when it works, it works. It’s always nice to see a kung fu flick try something different, which I think paid off. Tragically, Alexander Fu Sheng would pass away in 1983 from an automobile accident. He doesn’t have much of a following in the west, but he’s still held in high regard in Hong Kong. I hope his flicks get more attention, as I do think he was a very talented actor. Even when the content of “Disciples of Shaolin” was letting him down, he helped elevate the project with his charisma, skill and acting abilities.

Violence:  Probably PG-13 worthy. It has its moments.

Nudity: None, although sex is often referenced.

Overall: “Disciples of Shaolin” is probably worth watching if you’re a fan of Kung Fu movies, but want more drama than action. It’s nothing special, but it’s good enough.