(Written and Directed by Jim DeMonaco) 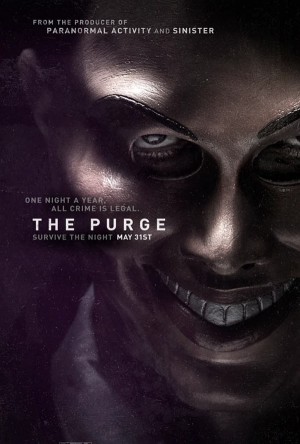 Plot: In the future, there is one day a year where all crimes become legal, in order to ‘purge’ barbaric tendencies. It has boosted the economy, while reducing crime to an all time low. The Sandin family supports this event, but do not partake in it, instead just isolating themselves in their home. But when their son lets a stranger in their house for protection, they find themselves under siege by a group of psychopaths who wants his blood.

When “The Purge” was released, everyone unanimously complained that its excellent premise was totally wasted on a home invasion thriller. The idea of crime being legal for a single day is ripe with potential and how do the filmmakers utilize it? By having dudes in scary masks stalk Ethan Hawke and his kids. Lame! While I actually agree with this line of thought, I’ve decided to forgive “The Purge” for its lack of vision. I was under the impression that the filmmakers merely wanted to make a home invasion flick that happened to have a unique gimmick. If anything, I shall bestow “The Purge” a kiss upon its forehead for actually trying to make a home invasion thriller something MORE than just your average home invasion thriller. I’ve said it many times before, but home invasion films all seem to be the same movie and even “The Purge” is determined to embrace the clichés. The central idea would’ve been cooler in a flick that wasn’t trapped within the confines of this subgenre, but it also made “The Purge” stand out more than the majority of them…This is important, because without it, the film would be bland and forgettable.

When you think about it, one day of free criminal activity boosting the economy, while reducing unemployment and crime doesn’t make a whole lot of sense. How would that effect the economy? It’s suggested the homeless are the primary target, which explains the lack of unemployment, but wouldn’t that make the purging a case of blue balls since there wouldn’t be enough homeless for everyone to kill? “The Purge” is inconsistent as to whether their neighborhood is supposed to be high end or not (there are homeless people and everyone is apparently jealous of the Sandins’ success). The idea that crime is reduced based on being allowed one day of killing is perhaps the biggest hole, however. Aren’t most criminals repeat offenders? Don’t rapists usually do it more than once? If anything, wouldn’t allowing anyone to indulge their darkest desires just give them their first taste of blood? Most criminals don’t care whether it’s legal or not. You know, guys, considering everyone is praising the premise of “The Purge” and damning the movie itself for being beneath it, this concept is inherently flawed. But all this does is provide the setting, an excuse for people in scary masks to stalk our heroes. The structure can be summed up as “The Strangers” meets “Assault on Precinct 13”. So that’s why I’m not as vehement towards “The Purge” and its use of the premise like others were. If it spent too much time on emphasizing ‘crime is legal for a day’, I would’ve probably paid more attention to the holes that come with the story. At least in this case, the holes are merely part of the setting, not the primary plot. 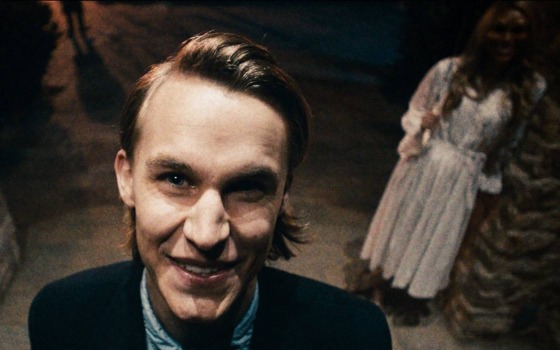 Good ideas driving horror films isn’t as uncommon as you might think. But usually outside of the wacky concept, the rest of the movie is highly conventional. While “The Purge” isn’t above this flaw, it does deserve credit for giving the audience a continuous stream of interesting ideas. The Sandin’s parents enjoy the benefits of the Purge, believing it works, while also claiming the moral high ground as they don’t actually partake in it. This leads to plenty of moral dilemmas. Could our hero send this homeless man to his death if it meant protecting his family? It’s interesting to see the protagonists get ‘blood on their hands’, while also revealing conflicting views in the process. It’s an ongoing internal battle. Furthermore, while it ultimately amounts to a red herring, there are also implications that various family members might want to murder their loved ones. How else do you explain the ominous camera pushes and creepy zingers as a character will stare suspiciously at a parent, spouse or child…Granted, the majority of these ideas aren’t very effectively executed, but at least “The Purge” has ideas.

Unfortunately, it also falls victim to the obnoxious home invasion conventions. As always, the family unit is in discord. The Father tries his hardest to keep everyone together, but everyone seems to hate him…for some reason (I didn’t really get that, but whatever). The Mother is distant, the daughter is bitchy and the son is rebellious (although in a positive way). Naturally, during the first act, we have to endure their constant bickering towards each-other…because I’m TOTALLY NOT sick of yelling in a home invasion movie…except I am! WE GET IT, SCREENWRITERS! The Family must ban together to repel the invasion. This trope burned itself out in the 80’s…WHY ARE WE STILL USING THESE CLICHES THIRTY YEARS LATER?! Everyone has to be stupid in order to drive the plot and believe it or not, I aint referring to the son sheltering the stranger. That was a moral choice, which does not stem from the brain. I am referring to EVERYONE’S decisions to constantly split up…for…some…reason… This lead to the redundancy of the Father finding someone, only for his other kid to run away…FOR SOME REASON. It felt like padding, which is strange considering they set up various scenarios which never play out. The Mom is seen being stalked by a masked psycho, but does that lead to any attack? Nope. The main villain has disturbing plans for the daughter, but they don’t even really interact. Why have those scenes if they lead nowhere? They could’ve lead to more substantial material than just ‘I found my son! Shit, now my daughter is gone too? Okay, found my daughter. NOW MY WIFE IS GONE?!?’. I swear to “Dead Sushi“, that feels like 50% of the goddamn movie. 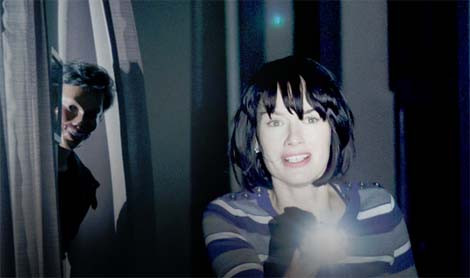 The stalk sequences have some suspense, although the film is never anywhere near as spooky as “Them” or even “The Strangers”, two similarly styled home invasion flicks.. It’s also not as exciting as “Assault on Precinct 13”, the original or remake (which the director wrote). It’s passable when it comes be being creepy. Still, I thought the build up leading to the invasion was pretty good. The main issue I had with the invasion itself was that the lighting was too dark. I couldn’t see what was happening at times. This becomes especially agonizing during the fight scenes. Yet “The Purge” knew how to build tension and it made the external conflicts watchable, even if you couldn’t actually ‘see’ them. It also moves really quickly, although the pacing constantly snags due to the redundant storytelling. So while it was never boring, it occasionally was exhausting- and not in a good way- at times. The acting is okay. Lena Headey probably delivered the best performance because she’s one of the few people who seems to be taking the movie seriously. Too bad “The Purge” didn’t often know what to do with her. Rhys Wakefield, whom I primarily know as the main dude from “Sanctum”, was probably my favorite performer. He’s so over-the-top and hammy, but in a way that’s thoroughly entertaining. His exaggerated mannerisms and quirky line deliver does occasionally undermine his threatening presence, but he’s always so enjoyable to behold. Shockingly, Ethan Hawke felt like the weak link. I like the guy, but he over-acts and it just didn’t work for his role. I didn’t like a lot of the performances during the ending either. Characters start babbling goofy sounding dialogue that would feel more comfortable coming out of the mouths of Satanic Cultists and the line delivery was forced and awkward. So the acting is a mixed bag, while its scare tactics are acceptable but unexceptional.

“The Purge” is a standard home invasion flick, which is made tolerable due to the intriguing concept backing it. Yes, said concept deserves to be in a flick that isn’t a home invasion flick, but this is a home invasion flick…Deal with it. I can and I hate these kinds of movies due to their insane level of monotony. But at least “The Purge” offers some original ideas in regards to the setting and the moral decisions characters must make. Even if the formula is the same, at least these ideas make it stand out from the rest of the pack. Yet when you strip it of its premise, it’s nothing special- for better or worse. It’s neither really bad or especially good. “The Purge” is merely serviceable.

Violence: Rated PG-13. Actually, I think it’s more violent than your usual PG-13 movie, although it would’ve been more effective if it was a Hard-R. My previous review was “Kidnapped“, which packed the much needed edge which “The Purge” lacked simply because it was so visceral.

Overall: “The Purge” isn’t bad, but it’s the type of movie you watch solely as a rental- preferably on something like netflix.