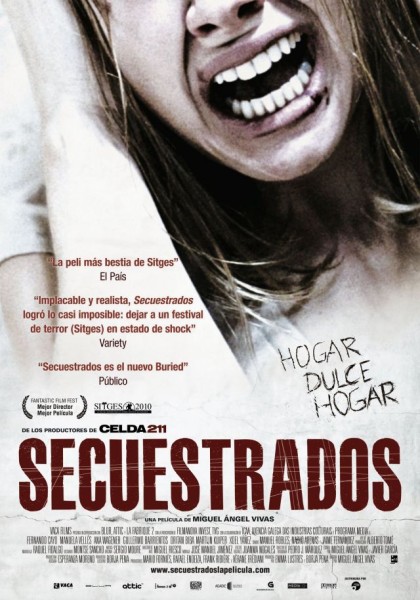 Plot: Three masked men invade the home of Jaime (Fernando Cayo), taking his family hostage and forcing him to withdraw all of his money while his wife (Ana Wagener) and daughter (Manuela Vellés) are terrorized. But the real violence hasn’t even begun…Also known as “Secuestrados“.

Throughout the first 30 minutes of “Kidnapped”, I grimly reminded myself that even though they might have different titles, every Home Invasion movie is the same. I often complain about modern day ghost flicks created from the success of “Paranormal Activity” and how they are often so interchangeable, but at least they have different gimmicks. Home Invasion flicks don’t even bother with that, unless they want to be really obnoxious and be “Funny Games”. F@ck “Funny Games”! “Kidnapped”, unfortunately, is a very conventional Home Invasion flick. I started having fun picking apart the various clichés, just within the first act. How come the invaders always come in three’s, with the EXACT same f@cking roles: The professional leader, the psychotic and the conflicted newbie. As always, the protagonists will attempt to escape, even though we know it’s not going to work because the half way point hasn’t been reached yet. As always, an unfortunate cop will stumble onto the situation and get themselves killed. As always, the psychotic has a mental breakdown and ignores the leader while bullying the newb, who yells “This wasn’t supposed to happen!”. As always, the Father must become a real man to overcome the threat and unite the family. But during the first 10 minutes, “Kidnapped” rubs in our noses the WORST thing about Home Invasion flicks: The family. Usually the marriage is on the rocks and while this film doesn’t go that far, the majority of the screen-time before the invasion is dedicated to the husband and wife arguing. Yet it’s the daughter who really pissed me off. Kids are always bitchy in any kind of horror or thriller, but this brat takes it even farther.

But then something miraculous started to happen…I became invested. I don’t really know when this came about, as throughout the majority of the screen-time I was either rolling my eyes or cursing at the screen whenever someone would do something stupid or contrived in order to drive the story. That never really stops either. But the violence starts picking up and the events became more and more difficult to watch. I initially was so annoyed with the daughter that any act of violence against her would bring a smile to my face…until horrific acts of violence started actually happening towards her…I ended up feeling bad for the girl. When the finale went around and the family started their counter attack, I really got into it. I eventually realized that I wasn’t making an attachment to the characters as much as I was making an attachment to the violence. There is a shocking amount of gore, but prior to the real bloodshed, we get beatings, a rape and a broken arm. Those were so effectively executed that it became so hard to watch that I could no longer root for the deaths of the family and now wanted them to overcome their challenges.

The director attempts some style by using a split screen, but I didn’t care for it. Even though I did like how the last one ends and it was an interesting stab at something different, I found it to be more distracting than anything. It made it difficult to focus on what was going on. But the director does a superb job at framing the action, especially during the break in (great jump scare). He handled the suspense well and there’s a certain bleakness about the atmosphere which shook me up. I will say “Kidnapped” was probably too mean spirited for its own good, but the final result was that I finished the movie feeling jittery. I had to take deep breaths to calm down. Other weak links include the dubbing, which does get better, but starts off really awkward. That undermined the otherwise good performances. I also felt the beginning raised too many questions, primarily “Why did this have to be there?”. But I can complain about the questionable writing, dubbing and its reliance on clichés all I want, the fact of the matter is “Kidnapped” disturbed me. It got under my skin. I can’t say I like “Kidnapped” for the same reasons I dislike most Home Invasion flicks- they’re all the same- but I have to respect it for unsettling me with its viciousness.

Nudity: Some male nudity and there is a rape scene. Not easy to watch.

Overall: “Kidnapped” is a must see for fans of home invasion flicks and if you’re like me and dislike that subgenre, you might concede that it’s one of the more effective examples of the formula.