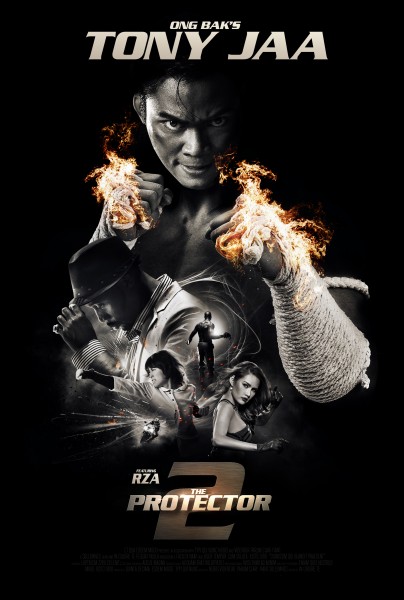 Plot: Kham (Tony Jaa) still loves his elephant a bit too much, so when it is kidnapped…again…he goes on a rampage and stumbles upon a conspiracy…again…

When it was announced that there would be a “The Protector 2“, everyone was incredibly excited…primarily because this project has been in development since back when Tony Jaa was still relevant…One “Ong Bak 3” later, nobody cared. The fandom had mostly moved on to Iko Uwais as the ‘future of the genre’. I can’t really say that this project enticed me from the beginning because I thought “The Protector” was vastly overrated. It was okay, but was the equivalent of the child of a famous actor trying to step within their parents shoes. When your daddy is “Ong Bak“, you just can’t compare. But just as the high expectations enforced by “Ong Bak” worked against “The Protector“, the low expectations gifted from “Ong Bak 3” worked in favor for “The Protector 2“. Fans have complained about the sloppy screen-play, the reliance on bad special effects, the lack of Jeeja Yanin (“Chocolate“) and the cushioned punches and kicks of the fight scenes. Those are all very correct criticisms. But even when I was agreeing with the detractors, I found myself enjoying “The Protector 2“…even if it wasn’t always for the right reasons.

One of my problems with the first flick was that the fight scenes were kind of redundant. Tony Jaa would seemingly do the same moves over and over, which even the gruesome bone crunching sound effects could not keep from getting old. “The Protector 2” tones down the violence of the action and some have claimed that the movie feels soft as a result. I kind of agree…The punches, kicks and elbows don’t look like they’re doing that much damage, so traditional Jaa fans might be annoyed. However, I thought there was much more of a variety in the martial arts choreography. The techniques are more diverse and the use of settings, props, etc added more flavor to the combat. Tony Jaa doesn’t always look comfortable using some of these moves and at times, I even thought he was a little sloppy. Nevertheless, the pacing of the action was still on the money and Jaa’s awesome moments outweigh his less awesome moments.  As every reviewer has pointed out, Prachya Pinkaew makes use of CGI and green-screens. Unfortunately, he and his crew were obviously inexperienced when it came to these more western tactics as they both look very bad. Every time a green screen is used, it looks like Tony Jaa is standing in front of a green screen. The CGI is even more awkward to behold, but it didn’t ruin my experience. I was concerned that Jaa’s stunts would be replaced by post production effects, but computer generated imagery is only used when it would be impossible for a real person to pull such a feat off. I guess I can see the appeal of having warriors fight in a room literally blanketed in fire, which would be way too dangerous to do the old fashioned way. There’s an explosion that sends a car flying on top of another car, which would’ve been awesome if the special effects were on par with what Hollywood is capable of. At least the filmmakers had big ideas as to how to use the CGI, even if it’s very unconvincing. There is still traditional stuntwork and it is often very cringe inducing, although at times the direction and cinematography undermine it.

“The Protector 2” also has some legit comedy and I was surprised at how much I laughed WITH IT. There are some good lines and the comedic timing of them was spot on. Some examples of its successful humor include Mark (Petchai Wongkamlao) making fun of Kham’s claim that his elephant is like his brother, the blind linguist translating “You’ll get lots of pussy” to “you’ll get lots of kittens” and RZA stating that he had been disappointed with our heroes work in the past decade…Seriously, was that an in-joke directed at Tony Jaa’s career? I do wish Jaa would do more comedy, as I’m tired of him playing this same serious persona over and over again. Tony Jaa can match-possibly even surpass- guys like Jet Li and Donnie Yen punch for punch and kick to kick, but he isn’t even a challenge to them in regards to acting. His attempts at emoting are either downplayed to the point of being wooden or oversold to the point of unintentional hilarity. Yet this weakness hasn’t stopped him from trying to expand his range, but I think he should try stepping away from serious material for awhile. The outtakes during the credits show his comedic side, which I want to see more of. As for “The Protector 2“, he’s still the straight man but that almost is funnier because of how absurd the rest of the movie is. So I was content with his performance and unlike the first film, there are no laughably bad dramatic moments from him. Petchtai Wongkamlao (Mark) works well as the comedic relief. Detractors usually complain about RZA’s (LC) presence, but outside of some goofy facial expressions, I didn’t mind him. He acquits himself surprisingly well when it came to fighting, although you’ll likely pay more attention to Marrese Crump (Number 2) when it comes to martial arts abilities. I think my biggest complaint directed at “The Protector 2” is how poorly Yanin “Jeeja” Vismistananda (Ping Ping) was used. Her entire subplot felt superfluous, she doesn’t get enough screen-time and she’s presented as Tony Jaa’s inferior- requiring her sister to match with him. I took no issue with her fighting skill or acting ability, but I kind of wonder if she was written into the story at the last minute. Either way, it was a missed opportunity. “The Protector 2” has often been accused of being ludicrous and silly, but wasn’t that the point? When characters’ shoes are making light saber noises because of how they conducted electricity…or something…That is a sign that the movie isn’t taking itself very seriously. So I didn’t take it seriously and that allowed me to enjoy it.

In fact, the goofball tone cushions the films biggest failure: the script. I remember complaining about “The Protector” for having an unnecessarily convoluted story that often didn’t tie into the action very well. I also believe I said something about how it was structured in a weird way. You’d have Jaa react to the elephant being kidnapped before suddenly cutting to him attacking the villains without any build up to the confrontation. “The Protector 2” almost seems to parody the complaints I made because…this shit is pretty fucking ludicrous. Kham seems to always show up at the right moment, even if it makes no sense that he’d be able to find the place without some form of investigation. The story is a convoluted wasteland, involving Kham being framed for murder and hunted by the police, villains and a relative of the victim (Jeeja Yanin). That’s enough for a plot right there, but the writer includes this confusing assassination story where the elephant was being used as a bomb…There are SO many subplots which have little to do with anything that I occasionally even got confused. Then there will be individual situations which are just so damn absurd, like when Tony Jaa is chased be seemingly ONE HUNDRED mask wearing, machete wielding bikers- only to stop them by going into a tunnel and getting off of his bike…because now it’s in the way and they can’t drive anymore, get it? Yet these flaws didn’t bother me that much. I think my problem with “The Protector” in terms of its story was that the tone was so grim. “The Protector 2” pokes fun at itself while just being so weird on its own that I was constantly laughing at it- if I wasn’t laughing with it. You’ll have a scene where Kham thinks he has just witnessed a friend get killed and he gets annoyed. But when they threaten his elephant, there is this dramatic dolly zoom and suddenly Kham is furious. He might as well have said: “You can kill my friends, but don’t you dare f@ck with my elephant!“. I refuse to believe that the filmmakers didn’t see how silly this was, but even if it’s unintentional, the important thing is that I laughed.

Unfortunately I doubt some of its technical problems were intentional. Some of the editing is really choppy, especially with how they incorporate the 3D shots. Admittedly I always find it amusing when this old fashioned, gimmicky style of 3D is forced into a 2D format (like “Jaws 3“). So even when a smooth fight scene will be interrupted so Tony Jaa can kick at the camera- when it is obvious that wasn’t filmed at the same time- I would snicker. The Thai film industry is just not ready for something as advanced as 3D, so I’m not sure why Prachya Pinkaew would risk Tony Jaa’s comeback for a gimmick that even Hollywood continues to struggle with…But then again, I’m not sure why Prachya Pinkaew would make a goofy, comedic sequel to a gritty, violent actioner during a time period where fans prefer gritty, violent actioners. Now that guys like Gareth Evans, Wilson Yip, Iko Uwais and Donnie Yen are carrying the martial arts genre with their edgier and more dramatic brand of martial arts- which Tony Jaa helped popularize- perhaps Jaa wanted to do something completely different and unexpected. Yeah, “The Protector 2” feels more like a parody of “The Protector” than a sequel and many will spit upon the shift in tone. If It had been called something else, I’m sure the reception wouldn’t have been so severe…This is the same kind of movie that “Dynamite Warrior” and “Born to Fight” was: Silly, sIlly, “SiLly”, “SilLy, and sillY! It’s intended to be a goofball, over-the-top, martial arts comedy- more akin to a Jackie Chan flick. It’s not necessarily one of the better examples of the genre, but I had a positive reaction to its mayhem…At the absolute least, it wasn’t as boring as “Ong Bak 3“! Yet I am merely one viewer and unfortunately, Prachya Pinkaew‘s and Tony Jaa’s bold experiment has been deemed a failure by the masses.

Violence: Rated R worthy, maybe? It might get away with PG-13. It’s still pretty violent, although compared to Jaa’s earlier efforts, this is nothing.

Nudity: Some sexuality, but nothing explicit.

Overall: “The Protector 2” can be enjoyed as long as you expect a more comedic and light hearted film that’s occasionally entertaining in an ironic way……