(Written and Directed by Chalerm Wongpim) 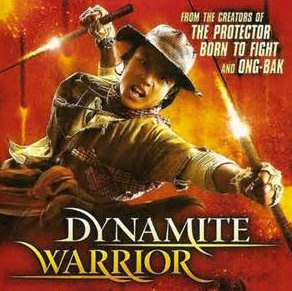 Plot: Jone Bang Fai (Dan Chupong), also known as the ‘Rocket Thief’, steals buffalo to give to the poor while hunting down his parents’ killer. When he encounters Sing (Samart Payakarun), a Buffalo herder with magical powers, he realizes that this now respectable man might be the person he’s looking for. But in order to combat such mystical powers, he needs the help of a mysterious, sinister Black Wizard (Panna Rittikrai). Hijinks ensue?

After “Ong Bak” was a smash success, Thailand suddenly (albeit briefly) became the capital for the martial arts genre. The insane stunts, brutal choreography and unique styles were enough to make stars out of Dan Chupong (“The Tsunami Warrior“), Yanin “Jeeja” Vismitananda (“Chocolate“) and especially Tony Jaa (“Ong Bak“). But alas, it didn’t take long before the cliches began to set in and what began as fresh and exciting became dull and monotonous. It also didn’t help that the market was being flooded with awful movies made in the 90’s which were now exploiting Tony Jaa’s name and face, pretending he was the protagonist even though he had about 10 minutes worth of screentime. Dan Chupong snagged the leading man role in “Born to Fight“, one of the better (albeit sillier) flicks of the Muay Thai trend, due to his mad martial arts skills and his uncanny resemblance to Tony Jaa. He followed this up with “Dynamite Warrior“, which intended to be a little different from the rest of the pack. Throughout my viewing of this…odd little film, I wasn’t really enjoying myself. My eyes were rolling so much that I’m pretty sure I became cross-eyed in the process and the martial arts itself wasn’t doing much for me. Sure, the techniques looked pretty good. You get enough ‘knee to head’ action to qualify the choreography as ‘Muay Thai’, but the movements all seemed incredibly sluggish. The fight scenes looked more like rehearsals for the real fight scenes, not the finished product. Eventually, I realized my mistake. I was watching “Dynamite Warrior” under the understanding that it was a martial arts film. In reality, it’s a fantasy, adventure, western, comedy that just happens to have (Muay Thai) martial arts. Once I got used to its ‘focus’, I began to enjoy “Dynamite Warrior“, as silly as it could be.

“Dynamite Warrior” is really goofy, making “Born to Fight” seem almost low key in comparison and that movie had athletes using gymnastics to combat terrorists. Chupong’s character utilizes rockets in his style of combat…Yes, you heard that right. But he doesn’t just fire rockets at enemies, he also has the tendency to…ride…them… As absurd as this is, I am happy to say that the rocket effects are nicely rendered. Other than the very end, I never thought they looked too phony. He’s a Robin Hood-esque character, but his naivety makes me wonder if these poor farmers had also manipulated him into stealing the cattle for them. Seriously, all it takes is one douchebag and his girlfriend poorly pretending to be siblings whose parents were murdered by Sing in order to trick Jone Bang Fai into helping them. Jone Bang Fai isn’t really a fleshed out or consistent character. Then again, he doesn’t really become an actual character until 40 minutes into the story. Early on, he’s more of an enigma who strikes badass poses and is more of a symbol than a person. When we get to learn more about him, he’s kind of an anti-social moron. Still, at least Dan Chupong is entertaining in the role. One of my issues with “Born to Fight” was how boring he was. He looked and acted too much like Tony Jaa without adding anything else, but “Dynamite Warrior” gives him a fun gimmick, wardrobe and personality. It’s amazing how he would begin as a second rate Tony Jaa, but would actually steal the show from Jaa in “Ong Bak 3“. “Dynamite Warrior” allows him to show off some of his talents as an all around performer, not just as a martial artist. 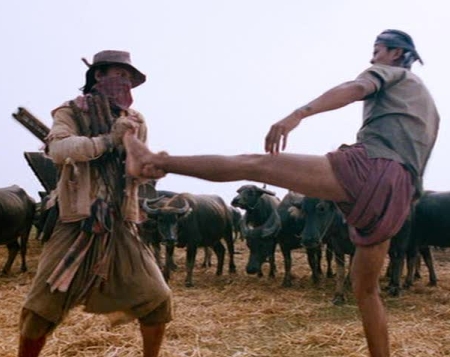 But the wackiness doesn’t stop with its protagonist, just look at the rest of the story. Sing has mystical powers which allows him to turn his followers into much stronger fighters with animalistic instincts, although he usually just throws people around. Once again, the special effects are surprisingly polished for a movie that came from a country which is not renown for its visual effects. So how will our hero fight him? By going to a Black Wizard and apparently trusting him…even though his name is freaking “BLACK WIZARD”!. Black Wizard and Sing shared the same teacher and it should be noted that Rocket boy only identified his parents’ killer based on the symbol on Sing’s chest. Hmmm…I wonder where that will lead too? But to disable Sing’s powers, they need to get the menstrual blood of a virgin…Because…That’s apparently how magic works in this movie. Later on, it’s revealed to remove the spell, the virgin in question has to apologize to Sing…which…apparently is how magic works in this movie…This movie is fucking weird. I haven’t even gotten to some of the minor additions either, like the gluttonous henchman who eats a dudes leg when he gets too hungry. This strangeness actually does eventually start to become endearing, because…come on. A moron who rides rockets into battle must get the menstrual blood of a virgin in order to defeat a magic wielder, who can only regain his powers if the girl apologizes to him. Have you ever heard of something so gloriously daft?

I suppose Thai comedy is about as subtle as Hong Kong comedy. There’s a lot of slapstick humor. Characters act incredibly over-the-top and goofy, relying on excessive mugging and physical comedy. It’s pretty strange how the villains cruelty us often played for laughs. It’s even stranger considering how violent “Dynamite Warrior” can be at times. I’m not sure if I can criticize the tone though because it’s never too dark for very long. When the love interest is introduced, we get a lot of wacky misunderstandings, since male protagonists in Thailand actioners seem to never know how to act around women. A lot of the more comedic situations though are more annoying than amusing. As I said, I was constantly rolling my eyes. One of the main villains is always hungry, so there’s a scene when he could potentially slay the heroes, but becomes distracted when Jone Bang Fai throws a plate of food in the opposite direction. What an odd gimmick, considering usually these kinds of characters are obese. The most obnoxious moments come during the ending, when two of the villains share the same body. It gives the actor a lot of material to perform in front of the camera, but it’s just really f@cking annoying. I honestly thought the movie was at its funniest when it was just being bizarre. When it actually tried to make me laugh, I tended to cringe.

Luckily, “Dynamite Warrior” has a nice, breezy pace that made the whole experience go down rather smoothly. The director seems to be going for an almost western aesthetic and it meshes nicely in the Thailand setting. During the ending, the action takes place in some really nice locations. The finale is very energetic and exciting. The action suddenly becomes better and it’s even more engaging because the hero isn’t dominating the villain. Yes, he ultimately overcomes the majority of his opponents, but it’s not a one sided fight. I thought the director did a decent job at combining classic Muay Thai techniques with fantasy-fu. The biggest mistake anyone can make going into “Dynamite Warrior” is expecting something on par with “Ong Bak” or even “Born to Fight“. This is an adventure film that relies on visual effects more than it does martial arts choreography. It’s like a western, but replace the gun-fights with fist-fights. If you’re really familiar with westerns, then you should know that gun slinging is only a part of that genre, just as Muay Thai is only a part of “Dynamite Warrior“. It’s silly and sappy, but Asia tends to like silly and sappy more than us Westerners do. Once I accepted “Dynamite Warrior” for what it was and got used to its ‘loud’ sense of humor, I found myself enjoying it. Granted, I probably won’t watch it again in the immediate future, but I didn’t mind watching it at least once.

Nudity: None, but there is some sex talk and an attempted rape…very Sammo Hung-ish of you, Mr. Filmmakers.

Overall: “Dynamite Warrior” is more of a fantasy film than it is a martial arts flick, but as that, I thought it was decent.