Plot: Tim (Brenton Thwaites) is released from a mental institution, which he had been placed in after he claimed that a haunted mirror forced him to kill his Father when he was a kid. He now accepts responsibility for his actions, no longer believing in the paranormal. However, his sister (Karen Gillan) is convinced that the mirror was really haunted and she conspires to have it destroyed. The siblings- both with opposing views as to what really happened- suddenly realize that they are dealing with a malevolent force with power beyond their imagination …or is it just in their minds?

I was uninterested in “Oculus” when I first saw the trailers for a handful of reasons. I thought it was strange that a wrestling federation was backing this wrestler-less project. I also hated “Dead Man Down“, so am wary of these odd experiments from from WWE’s film studios. For the record, I remember them promoting this movie by having a horrible Adam Rose skit, which only made me not want to see it even more. But even worse than any of that, “Oculus” looked like it was going to be another generic haunting flick and I have made it clear that this genre has become stale- multiplied by seven. Even the positive reviews couldn’t get me excited, but I knew I would get around to it eventually…and I really owe “Oculus” an apology. It annoys me so much that I’ve spent money to see crap like “Annabelle” and “Dark Skies” in the theaters, but chose to avoid this hidden gem until it had become padding for my netflix queue. “Oculus” is unusual though because it’s one of the few modern day horror films where the script is the primary focus, not the direction. It boasts a very clever, inspired and engaging story, which is so successful that I didn’t even realize it was lacking in the scare department until the film was over. That sounds like it should be a criticism, but I was rewarded in so many other ways that it didn’t matter. 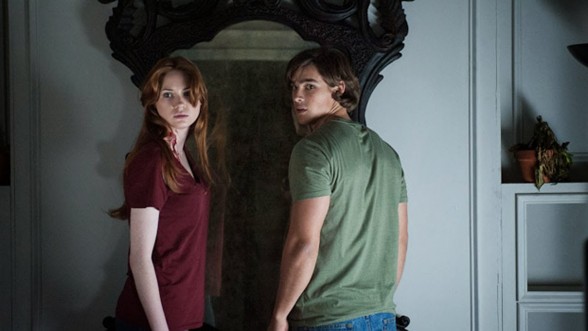 I was going to admit that “Oculus” contained many of the cliches and conventions which accompany most haunting flicks, but the more I thought about it, the more I realized that it actually avoided the worst ones. Okay, the whole back-story involving the mirror corrupting the previously happy parents has been done before- like in “The Grudge 2“. The idea of the protagonist being released from a mental institution, casting doubt upon his insanity when the creepy stuff starts happening was likely borrowed from “A Tale From Two Sisters“….But..but…is that seriously all I can think of? “Oculus” contains more original content than the majority of its contemporaries. Even “The Conjuring“, which was arguably the best example of this genre, went through all the cliches and conventions- if only to acknowledge their existence before avoiding them. But “Oculus” has its own characters, it’s own story and it’s own rules. It is self aware, but not as a parody. Instead, the characters know of the various tropes and use that knowledge to combat the malevolent entity. That was also a unique idea. There are two storylines, one involving the mirror terrorizing the family and the other focusing on the survivors terrorizing the mirror. I liked the plans they’d conjure up to outsmart it, such as measuring the radius of its power, setting up a death trap that works on a timer and requires one of them to reset it- ensuring the mirror can’t outright kill them without perishing itself. Hell, they even outright leave the house when things become too intense. Yet the mirror is also crafty and “Oculus” is ultimately a battle of wits. The mirror’s powers were pretty unusual, especially as it counters their savviness with illusions. They left the house, or did the mirror make them think they left the house? The flashback segments might be seen as a way to pad out the time and allow a more conventional story to unfold, but you eventually begin to realize that they do have a very unconventional purpose within the narrative. Are the characters reliving memories? Or is the mirror projecting these thoughts into their head. Very interesting… 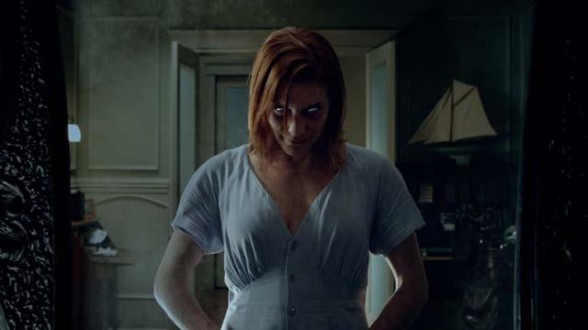 The characters are endearing, even with their own personal flaws and weaknesses. Kaylie and Tim are both very wounded people, but they have understandable motivations and I liked how both evolved as the film progressed. Tim’s time in the mental institution has grounded him in reality and his arguments towards a more practical explanation for what was occuring were compelling…*gasp* a skeptical character whose denial makes sense? Kaylie is incredibly intelligent, but her desperation causes her to have some oversights which felt right for the character. Her determination and focus was admirable, while her apparent instability makes her kind of unsettling. The acting was very good too, particularly from Karen Gillan. “Oculus“, throughout the majority of its running time, embraces ambiguity. Is the mirror really haunted or are they they simply going insane? Even the ending leaves it up to our imagination, but these possibilities only enhance the already compelling narrative. Once again, “Oculus” explores areas which are often left untouched by similar films. It either gives us new ideas or fresh spins on old ideas, instead of relying on the same old shit.

Unfortunately, “Oculus” is never really scary. There are some spooky moments and a handful of great, chilling money shots. But I don’t recall ever jumping or trembling. The high points of “Annabelle” were much more frightening- even if as a whole, the movie was boring. There is a foreboding atmosphere thanks to the grim cinematography and chilling score. I also didn’t feel short changed in the suspense department…The deathtrap alone was an excellent way to generate tension. The lack of scares seems like a pretty damning criticism, as horror movies are usually supposed to have that effect on us. But despite the ‘horror’ set up, I actually thought “Oculus” was more of a psychological thriller. If anything, the more ‘horror’-centric parts probably only exist as a marketing tool. Yet I will admit to being underwhelmed by the finale, especially as it seemed like the filmmakers were trying their hardest to frighten me. Glowing eyes are just not enough to get the job done. Yet regardless of the intended genre, “Oculus” won me over based on its script. It is a lot of things, but it is certainly not ‘just another generic haunting’ flick. So I apologize, “Oculus“, for not seeing you in theaters. You were definitely worth paying the price for.

Violence: Rated R, it has its moments.

Overall:”Oculus” was pretty good, relying more on brains than scares.