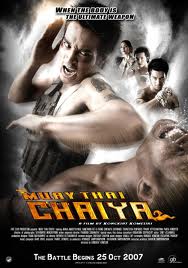 Plot: Three friends, who grew up together and trained in Chaiya boxing (a form of Muy Thai), take different paths when they move into Bangkok. Two become criminals while one becomes a professional fighter, but their paths are about to collide. Also known as “Chaiya“.

In my last review, I questioned whether “Julia’s Eyes” should be lauded for its ambitions or criticized for biting off more than it could chew. “Muay Thai Fighter” is a same kind of movie, except of the martial arts variety. It is not about fighting, it’s about the fighters. We have here a coming-of-age film, mixed in with a gangster story and character drama. It just happens that our protagonists are also practitioners of Muy Thai kickboxing. Every once in awhile, characters will get in a ring and introduce their fists to their enemies faces. But “Muay Thai Fighter” is more about the downward spiral of Piak (Akara Amarttayakul) and the rise of Pao (Thawatchai Phanpakdee), which naturally brings tension to their relationship. Samor (Sonthaya Chitmanee) became Piak’s right hand man when an injury left him unable to box, so he’s caught in the middle. Even though I’m often described as a ‘shallow’ movie reviewer (and I am), I can appreciate a good melodrama, if I make a connection to the characters. “Muay Thai Fighter” apparently impressed many viewers, but not me. While I wouldn’t call it terrible, all I saw was a bunch of cliches getting in the way of action!

Piak marries Sriprai (Phreeta Kongpetch), but Pao is also in love with her, so he becomes jealous. But while skilled, Piak isn’t quite the fighter that Pao is and his temper forces him to fight in the underground circuit. He is eventually forced to become a gangster. Pao, on the other hand, becomes the respectable boxer that Piak wanted to be. Naturally, Piak is jealous of Pao. Thankfully, their love and respect for each-other is stronger than their envy, so the film doesn’t linger much on this. Unfortunately, Piak starts treating Sriprai poorly and she begins making eyes at Pao. We can tell where this is going, long before the feature actually gets there. To the films credit, it does avoid some cliches while inverting others. Despite the fact that Samor is the extra baggage, Piak never treats him poorly. You expect him to snap and call him “useless” or something, but he never does. Furthermore, the love triangle does have a surprising resolution, although I felt cheated more than anything. It struck me as unnecessary and contrived. “Muay Thai Fighter” prefers to tell more than show. We’re constantly being verbally reminded how much the friends love each0other and how tragic their story is. It’s desperate to force tears out of us and while the characters often cry, I never did. I never even sniffled, although there are a few effective moments. My favorite part is when Samor is walking aimlessly, playing his harmonica. It’s pretty poetic and moving, but that’s one scene out of a two hour movie. The rest is all pathos, no depth. It doesn’t help that the actors are so over-the-top that their performances seem more comical than dramatic. At least they are believable martial artists.

But my biggest complaint is how unnecessarily complex it was. How many bosses do Piak and Samor have to work under? They work under a corrupt coach, but then move to an ambitious gangster. Then they move to another one and I eventually stopped recognizing who the primary villain was. So many minor characters walk in and out of the movie that eventually I stopped keeping track of who they were. They needed to spend less time on this nonsense and more time on the trio growing up. We see maybe 20 minutes of their back-story, but then the group splits in two and the brotherhood bonds weren’t explored enough for me to care. If you can’t succeed as a drama, at least deliver more action. The Muy Thai present is a pretty realistic interpretation of the art, looking more grounded in reality than what I’m used too. It’s not on the same level as “Ong Bak” or “Born to Fight“, which were far more stylized, but the choreography was acceptable. The most impressive fight comes at the end when Piak takes on an entire gang with his sword. There just isn’t enough to redeem the misfired melodrama and the director goes too far with the slow motion. I can see why “Muay Thai Fighter” has its fans, but I just couldn’t bring myself to care about its cast. I found it to be a bit of a bore.

Nudity: I didn’t notice anything explicit, but there is a sex scene and plenty of strip clubs.

Overall: “Muay Thai Fighter” is more drama than action, but if that works for you, it might be worth a look.