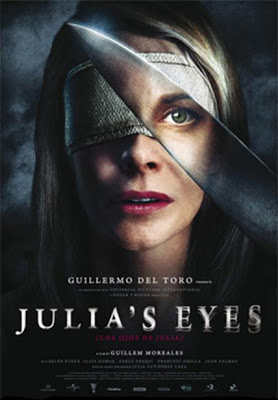 Plot: Julia (Belen Rueda) has a condition where stress causes her eyesight to deteriorate. When her twin sister commits suicide, Julia convinces herself that she was murdered and chooses to hunt down the killer. Can she do so without going blind?

“Julia’s Eyes” was an interesting experience. It’s a Spanish thriller that draws inspiration from gialli- especially the films of Dario Argento- but it is not content with being just a throwback. It is also a character understudy, being about a women who is struggling with the thought of going blind. There is even the possibility that something supernatural is going on behind the scenes, although we aren’t sure until later in the movie. This is a difficult feature to review, because part of me wants to praise its ambitions. “Julia’s Eyes” wants to be ‘more’ than just a thriller and indeed, it is a much fuller experience than most of its ilk. It can be tear jerking and heart warming along with being edgy and frightening. Yet it also sort of collapses under its own weight. It’s pacing is erratic and its ambitions can easily be confused with self indulgence. I think it is a pretty good movie, but it’s not for everyone.

I LOVED the first half of “Julia’s Eyes“. It has a slick concept, which is explored to its fullest. Not only does Julia’s loss of sight add to the tension, the director and cinematographer have a lot of fun communicating that visually. The blindness is part of the narrative AND style. While some of the locations are a bit silly, such as those long, dark tunnels, they do provide some nice chills. In a movie like this, I’d prefer absurd- yet freaky- settings over bland realism. The suspense is ample because there is something mysterious about every creepy scene. When Julia spies on some blind women, they sense her presence and she has to avoid them. That’s nerve wracking in itself, but when we learn that someone else is there, it makes event much more intense. The killer often seems present, but we never can tell exactly where he/she/it is. Talk about paranoia fuel. The camerawork is fairly experimental, but I never felt “Julia’s Eyes” was over-directed. In fact, while I say the director/cinematographer was ‘experimenting’, they clearly knew what they was doing because no shot backfired. The Argento influences are obvious, down to the killers’ black gloves. It’s a fine looking film, ripe with suspense and flash. The term ‘Giallo’ is an Italian term that became used to describe grisly thrillers in general, but it evolved into a subgenre of its own (not unlike the spaghetti western). “Julia’s Eyes” might not be Italian, but it does fit my definition of what makes a true Giallo.

It started to lose my interest during the middle block, where the movie forgets that it’s supposed to be a thriller and starts becoming a melodrama that belongs on the lifetime channel. It’s awkward and contrived, focusing on a tepid romance that’s supposed to bring depth to what will become the finale. I know what they were trying to do, but all it did was make it obvious who the killer was. It clogged up the pacing and I found myself glancing impatiently at my clock. Julia isn’t especially intelligent, as she has to know that her eyes can’t take anymore stress. There are some poetic moments and I liked how various faces are obscured thanks to Julia’s blindness. But after the quick start of the first act, this felt like a weight that dragged it down.

Things start to pick up again during the 3rd act, when Julia has to fight off the elusive villain. Once more, the director finds plenty of ways to generate tension or make us jump. My only complaint is that the scares are a little more conventional. But at least “Julia’s Eyes” had bite and I was at the edge of my seat. The violence was hardcore, yet not in a completely sleazy kind of way. They probably shouldn’t have bothered with the cheap red herrings, but it did add to the sense of panic. The acting is strong all around, but Belen Rueda deserves the most credit because she redeems what was almost an annoying character. She might make some ridiculous choices, but the actress balances vulnerability with strength masterfully. It made me fear for her and root for her, all at once. “Julia’s Eyes” was a good movie, but I felt it bit off more than it could chew. It needed to focus on its priorities and decide whether it wanted to be a drama or a thriller. I suppose it added another level of dimension to the film, but it also added another layer of fat. Pacing should feel natural, whether it’s slow or fast. “Julia’s Eyes” moves quickly, but then slams the breaks and starts moving at a snails pace, before slowly building up speed again. It’s not supposed to work that way! With that said, I loved what it did right. I’m a huge Giallo fan, so it’s nice to see a modern day interpretation of those kinds of films and I’m always a sucker for inspiration. “Julia’s Eyes” makes mistakes, but I forgive them.

Violence: Rated R. There aren’t a lot of kills, but the deaths/attacks are pretty vicious.

Nudity: Some in a dressing room scene. There’s also a quasi-attempted rape.

Overall: “Julia’s Eyes” is worth watching if you like thrillers or gialli, but expect some notable flaws.