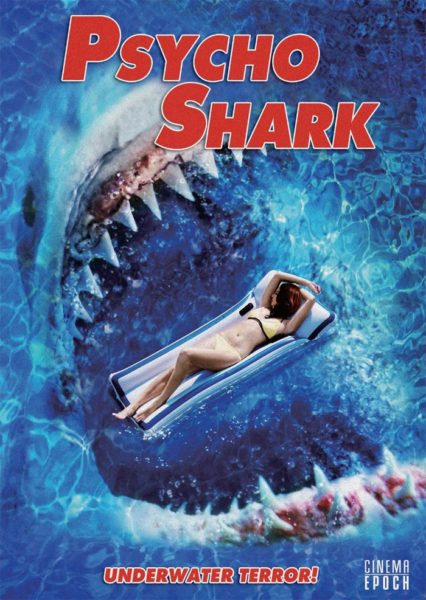 “Jaws in Japan” does for “Jaws 5: Cruel Jaws” what “Jaws 5: Cruel Jaws” did for “Jaws: The Revenge”…Which is to force critics to re-evaluate their definition of a ‘bad movie’ and come to conclusion that what they thought was terrible had been good all along…This is why I shall argue in my eventual review that “Jaws: The Revenge” was not a franchise killer or one of the worst sequels of all time, but was in fact a cinematic masterpiece, if only because it’s not “Jaws in Japan“…and while we’re at it, “Jaws 5: Cruel Jaws” was a worthy addition to the “Jaws” namesake as well. Psycho Shark“- I’m going to refer to it by the alternate title, for it is not worthy of the namesake that had been earned by “Ghost Shark 2: Urban Jaws“- is one of the worst movies I have ever seen. I would like you remind you that I willingly marathoned the “Puppet Master” franchise and am a connoisseur of direct-to-DVD Steven Seagal flicks, so my standards are perpetually low. I hated this movie so f@cking much that I began to hate myself for watching it, because every second of its 70 minute running-time is excruciatingly boring, annoying and even confusing. I’m not even sure if I can properly describe my rage without spoiling the plot…so I’ve just decided to spoil the plot…Throughout the FIRST F@CKING HOUR OF THIS ONE HOUR AND 10 MINUTE MOVIE, I was wondering where the shark was. Two girls visit a beach resort and one finds love, while the other discovers ‘found footage’. It turns out she stumbled upon the tapes of another group of girls who were visiting the same beach and she decides to watch them, even though she seems about as interested in their squabbling as we are. These scenes are tedious because every conversation is about the same topic and they drag on for seemingly forever. It doesn’t help that our heroine is visibly bored and even falls asleep while watching the recording, which I guess is one way to make her relatable. She also starts having psychic visions that she confuses with the footage, because…I dunno. They never explain it! Anyway, it turns out that the resort managers are killing the girls to make snuff films…and then the phoniest, giant CGI shark ever to appear in the history of cinema arrives and eats everyone…I think? It is a laughable effect, but you only see it for a few shots at the very end, so you won’t be laughing…You might be sleeping though. 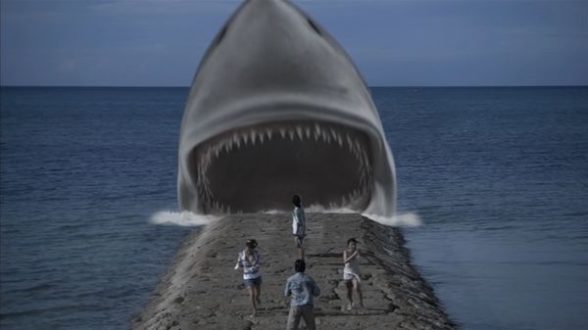 Every scene drags on and on, which is almost impressive because it’s not like anything is happening. The girls just talk about boys, food or making memories in the most bubbly way possible and then they don’t ever stop. The dream sequences (and their mingling with reality) might give you the impression that the director was being artsy, but this is a common red herring. He just didn’t have any ideas that he could afford and like many filmmakers whom have encountered similar problems, he disguises the lack of content with surrealism. The sound mixing is embarrassing, as the casts’ voices echo when indoors and they struggle being heard over the noise when outdoors. The music tries to be a metal version of John Williams’ classic score, but it sounds unappealing and derails the tone…although seriously, the tone is the least of this movie’s problems… “Psycho Shark” does try to redeem itself with lots of shameless shots of girls in bikinis, but even they lose their sex appeal after awhile and why are they wearing their swim suits in the showers?! If the filmmakers couldn’t afford more special effects, couldn’t they have at least tried fleshing out the characters and their relationships? The two leading ladies have an ugly falling out near the end, but it comes out of nowhere as the movie never took the time to build up tension between the two…or any tension at all! “Psycho Shark” might sound funny with its “Jaws in Japan” alternate title and horrendous shark effects, but it’s really a tedious affair that wasn’t even easy to make fun of. I’m too angry to have a laugh at its expense! I’m very, very angry! F@ck this piece of sh!t that came out of the @sshole of a f@ckng#&*$#*$#*$#**$#*$*@))$)$@__$)@)$@($@()$(($@($(@((@- and I’m broken now.