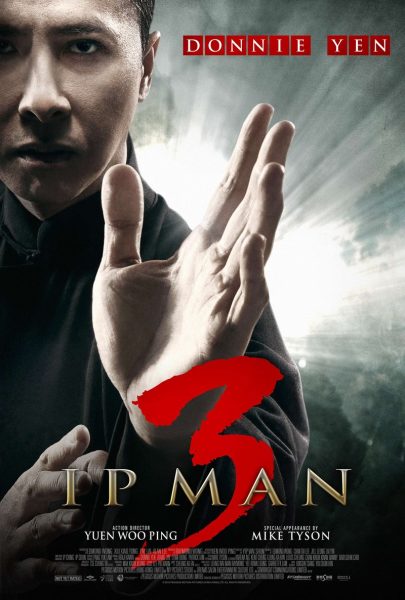 Plot: Ip Man (Donnie Yen) finds himself being forced to protect a school for children from a crooked property developer (Mike Tyson) and his gang. Also known as “Yip Man 3“.

Donnie Yen claimed that “Ip Man 2” would be his final contribution to the Ip Man saga, as the genre was becoming over-saturated with fake biographies of the man whose biggest claim to fame is training Bruce Lee- and not actually defeating Japanese Generals, Western boxers, ninja or whatever absurd concoction the filmmakers dreamed up (possibly under the influence of drugs). I’m going to be disappointed if there isn’t a movie about Ip Man fighting Nazi’s or Wizards or Nazi Wizards, because Ip Man has already entered the realm of exploitation and even Bruce Lee didn’t truly reach legendary status until he went to hell and battled James Bond, Zatoichi, Dracula and Clint Eastwood. Or was it when he faced Gay Power? Or maybe it was when he fought his own clones…Nevertheless, having an entire subgenre built around him cemented his legacy and if Ipsploitation is going to be a thing, then filmmakers need to start embracing the madness and not strive for artsy shit like “The Grandmaster“. A las, “Ip Man 3” lacks the likes of Gay Power (what does that even mean?), but at least it does contain Ip taking on Mike Tyson and that was something I never expected to see. But I’m not entirely sure what lured Donnie Yen back into this role, as he has become very successful in the past few years, so it’s not like he necessarily needed the money. I’m sure “Ip Man 3” was produced more for commercial than artistic reasons, as there is something…unnecessary…about this entire project. “Ip Man 2” might’ve been flawed, but you really did feel like inspiration played a huge part in its existence, while the third entry seems like it’s renting stock characters, storylines and situations to pass the time before the next big action set piece occurs. Yet despite the questionable intentions of the filmmakers, “Ip Man 3” is still pretty good, even if it’s the weakest of the trilogy.

“Ip Man 3” suffers from a very sloppy and disjointed script that often feels like the stories of two or three movies were crudely sewn together. The first half of the narrative surrounds gangsters attempting to strong-arm the owner of a school into selling his property for evil foreigner reasons, with Ip Man and his students valiantly defending them. This segment made me feel a little nostalgic, as “Ip Man 3” was really reminding me of a kung fu flick from the 70’s, complete with dated fashion trends, foreign caricatures, broad comedy, lots of heroic posturing and even fake Bruce Lee’s! But the story just felt weak and ordinary, especially compared to the previous two entries. What made Donnie Yen’s Ip Man so captivating is seeing this dignified, respectable person being put in undignified situations. He was a remnant of a much more whimsical time, now being forced to survive in the fallout of World War 2, which has no place for his noble ideals. But in “Ip Man 3“, his conflict only seems physical and the narrative never really challenges him (it kind of does, but more on that later). It’s just a cheesy kung fu story now, arguably borrowing the plot from Bruce Lee’s “Way of the Dragon“, albeit with a setting change. The fight scenes slowly trickle into the film, initially being solid but unexceptional, but the choreography progressively improves until the kung fu is just as spectacular as “Yip Man” and “Yip Man 2“. Jin Zhang (Cheung Tin-chi) arguably steals the show though with his quicker, flashier and more aggressive movements, although this might’ve been intentional as his style was intended to be a lot more violent than Ip’s. Even though the story was brittle, I took no issue with the pacing and was consistently entertained. The fights seem to peek when Ip Man faces an entire army of thugs, which incorporates the locations, weapons and a lot of stylized flailing (it’s awesome!). This is followed by a duel between Ip Man and Mike Tysons’ villain, which was surprisingly well done. Tyson is NOT a good actor, but the fight made great use of his physical presence and the choreography was was strangely psychological. I liked seeing their unspoken tactics unfold as they clashed. Furthermore, Ip Man’s enemies seem a lot stronger this time around and I occasionally found myself nervous for his well-being. The elevator attack in particular was very suspenseful thanks to the presence of Ip Man’s wife (Lynn Hung). Both Yen and Hung deserve so much praise for how they conveyed fear during that confrontation, as it added another layer to the (already exciting) action. But then the plot just…ends…around the half way point of the movie…and I was confused.

There are two other storythreads which were introduced early on, but remained in the background as the gangster storyline took the center stage. One involves a friendly rivalry between Ip and Cheung Tin-chi (Jin Zhang) that eventually becomes personal and the second is about Cheung Wing-sing (Lynn Hung) falling ill. These subplots felt more in line with Ips’ (as played by Yen) previous adventures, as Ip is once again being forced to endure humiliations for his loved ones, but it’s not quite as moving this time around because Ip himself doesn’t seem bothered by any of this. He never loses his smile and the film ends before we can see beneath his refined shell. With that said, I was emotionally invested because Lynn Hung’s acting was so damn good that I couldn’t help but shed a few tears. Her big breakdown scene was downright haunting and her chemistry with Yen made their interactions almost as gripping as the fight scenes. The Cheung Tin-chi subplot also works because he’s an interesting character, with Jin Zhang portraying him as a fundamentally good man who is forced to do some bad things in order to take care of his son. I liked how he respected Ip Man, but struggled with containing his jealousy over how the media favored one a lot more than the other and you see that struggle in his face and body language. He often gets involved in the same battles as Ip and sometimes even contributes MORE to their victories, but he’s either ignored or unceremoniously arrested while Ip is praised as a hero. This gives their conflict emotional stakes, but I also wish more time was spent on it. Their final fight is amazing though, arguably being the best amongst the entire trilogy thanks to its variety, intensity, technique and speed. But as a whole- the script seems to be at war with itself. The first half involving Mike Tyson and the gangsters only ensures that not enough time will be spent on developing the two more meaningful stories that would close the film, while the second half surrounding Ip’s wife and rival just makes the first half feel kind of superfluous. Why did they need that subplot of Ip’s pupils’ goofy courtship of a teacher? What happened to them? Why did the films’ most despicable villain get off so easily? There needed to be more satisfying resolutions to these characters. Why was Bruce Lee (the character) even here? He contributes nothing to the story AGAIN and yet these films keep whoring out his namesake. The filmmakers have already made it clear that they aren’t aiming for historical accuracy, so why are they so reluctant to put Bruce Lee into the conflict? Both halves of “Ip Man 3” are enjoyable, but they didn’t go very well together. Nevertheless, these points are all based around how “Ip Man 3” is inferior to its predecessors, which doesn’t mean it’s any kind of failure. It was a good time, connecting with me on an emotional level, while also dazzling me with its action scenes.

Violence: PG-13, I think. Brutal enough, but nothing too extreme.

Overall: “Ip Man 3” is good, but not as good as “Ip Man” or “Ip Man 2“. You should enjoy yourself, if you keep your expectations under control.