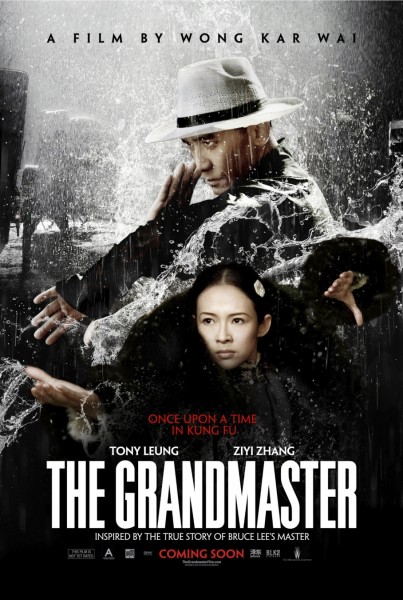 Plot: The rivalry between Ip Man (Tony Leung) and Gong Er (Zhang Ziyi) comes to an abrupt end when the Japanese invade China during World War 2. They must come to terms with the fact that life was the true enemy. But were they winners or losers?

Before I discuss my…rather complex feelings regarding “The Grandmaster”, I suppose I should mention a controversy that might’ve effected by judgment. I watched the United States cut, which is 20 minutes shorter than the original- more acclaimed- version that was seen in China. The good news surrounding the shorter film is that…well, it’s shorter. “The Grandmaster” is very slow paced and I would rather something ‘that occasionally bored me’ to devour less of my time. The bad news is that this movie has a loose narrative, primarily designed to flesh out the various characters, their situations and how they react to said situations, but everything feels underdeveloped. I had difficulty making attachments to them because I never felt like I got to know them. Ip Man starts off a little cocky, but you never notice when he’s humbled. He just suddenly drops the arrogance and becomes a full blown static character. The real Ip Man was very flawed, so it annoys me that the movies supposedly based on him present the master as a boring invincible hero. “Yip Man” might be a more conventional martial arts flick, but even that film emphasized how Ip Man reacts to his sudden drop in stature. “The Grandmaster” barely skims over that, as it seems to be more interested in Gong Er (Zhang Ziyi). I wouldn’t mind seeing Ip Man as a supporting character, except he gets more screen-time than she does. He has all of these different interactions that are supposed to mean something, but don’t. What was the point of the guy with the razor? He’s set up to be an opponent for Ip Man, but only appears in one scene and the implication that they would meet again is not touched upon. “Ip Man: The Final Fight” and “Ip Man: The Legend is Born” might be inferior to “The Grandmaster” on technical levels, but even they utilized the titular character more effectively. Gong Er develops rather poorly, as she starts off as an arrogant kung fu chick who only becomes increasingly more hostile as the movie progresses. When she confronts and conquers a major antagonist, there was an opportunity for her to come to the realization that would effect the later parts of her life, but she doesn’t appear to change. Her development occurs off-screen. But at least she has a character arc and a personality, which automatically makes her a more intriguing character than Ip Man. Because neither character was fleshed out adequately, their relationship pretty much means nothing. They have romantic feelings, but why? Because they fight incredibly well? What about Ip’s wife? Once again, there’s no time spent on any of this, so it didn’t matter. Maybe if that 20 minutes was restored, there would’ve been a bridge that would restore an emotional connection and that would have reduced the amount of time I was bored. Or maybe that 20 minutes would just be a lot of artsy stuff and my lethargy would be magnified. Who knows…Pacing is a fickle whore and for all the critical analysis I can force down your throat, you never know how something will come out until you experience it yourself.

I have heard complaints that the plot was confusing, but personally I was never lost. I just don’t think there was much of a plot to begin with. Or if there was, then it was buried underneath the directors desire to be ‘artistic’. The narrative is very episodic. It begins with a rivalry between the Northern and Southern kung fu experts, in which Ip Man goes through a “Game of Death“-like system in order to prove his worth. This segment ends with Ip Man emerges victorious, overcomes the Northern Master in wits and starts his love/hate rivalry with Gong Er. Then it briefly shows them entering a relationship through letters, but the Japanese attack. Yip Man starts a school, occasionally has to fight off some masters, re-connects with Gong Er who has become a much different person. Then it flashes back to Gong Er’s situation during all this time as she has to fight her rival, but at a major cost to her. Then the movie ends…except it wasn’t much of an ending. The finale pretty much proves that it was Gong Er’s movie and she gets the real ending, while Ip Man only watches and narrates. Typically, “The Grandmaster” concludes with Ip Man choosing to train Bruce Lee, which continues to annoy me. These fictionalized versions of Ip Man have had far more amazing conquests than Bruce Lee ever had, but every Ip Man movie has to end with a reference to Bruce. Is training a movie star really more impressive than fighting Japanese generals, Western boxers and Ninja? I understand that Bruce Lee is a legend (especially in China), but if you’re going to include him, tie him into the story or central theme. Don’t just force in an epilogue and treat it like an afterthought. Of course, no Ip Man movie wants to acknowledge that he refused to personally train Bruce for quasi-racist reasons (he used another student to instruct him), but I don’t expect historical accuracy. I do expect his presence to have a purpose within the narrative, however. The loose narrative contributes in bogging down the pacing. But while you fans are likely gritting your teeth at my words, please be patient with me. I don’t hate, or even dislike the movie. As I said, my feelings are very complex. 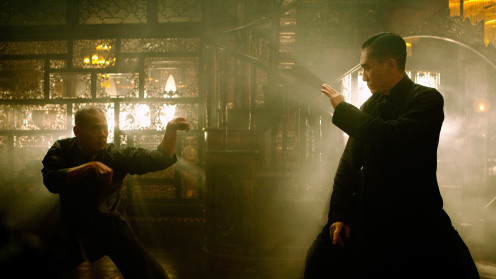 I was surprised how much action was on display during the first half, considering how every review emphasized that this wasn’t a traditional martial arts feature. There would be a dialogue oriented sequence, followed by a kung fu conflict and the process would repeat. The second half does drastically reduces the amount of fight scenes though, focusing more on the drama and artsy-ness. I thought this hurt the pacing, as it should’ve been the complete opposite. If it started off slow and gradually picked up, I think “The Grandmaster” would’ve went down smoothly. But following a fast paced first half with an unusually slow second half usually results in exhausting your average viewer. Luckily, the fight scenes are pretty spectacular in an unconventional kind of way. The choreography is good, although it’s obvious that the primary fighters are not real life martial artists based on the reliance on post production trickery. Now you might be asking how a fight can be ‘spectacular’ if the choreography is only ‘good’. I’ve been writing this review for about a week simply because I struggle putting my thoughts of this subject into words. “The Grandmaster” is more interested in how the fights are shot and edited than the fights themselves. Kar Wai Wong is a noted visual director and the choreography is merely a part of his grand vision. I often found myself paying more attention to the detail in the sets, the vivid color scheme, the pretty scenery, the outstanding cinematography, the moody and often haunting score and the superb use of the elements (snow, rain, fog) than I did the actual choreography. I found it thoroughly amusing that Kar Wai Wong’s direction often reminded me of Sergio Leone’s even BEFORE he started using the theme from “Once Upon a Time in America“. The action moves smoothly, but is filled with numerous individual shots that make for gorgeous stills. Whenever characters would enter a stance or deliver a technique, they complete the perfect image. There isn’t a single moment that’s mundane or simple. Every shot is artistically realized. “The Grandmaster” puts the art into arthouse.

But Kar Wai Wong doesn’t just create an aesthetically appealing movie so that our eyes can have plenty of candy. Every visual means something profound. This isn’t like “Tree of Life“, where the audience is conned into thinking that the movie is something deeper than it really is. Nor is it like “Only God Forgives“, where the depth is buried underneath too many layers of symbolism. “The Grandmaster” is subtle enough so it’s not treating its audience like morons, but the deeper meanings are easy to spot. The initial fight between Gong Er and Ip Man resembles a dance just as much as it resembles a fight, establishing their courtship without being too obvious. Beautiful! It’s just too bad that a single romantic kung fu fight can’t sustain a love story. My favorite scene is when Japan attacks. Ip Man and his family take a picture and some smooth editing transitions into the actual photo, which is engulfed in flames as the war begins. It looks cool, but it’s a chilling visual that has a purpose outside of looking cool. Even the music somehow manages to perfectly capture the mood, with tracks that embody anger, longing, regret, blissfulness and nostalgia. It’s a good soundtrack, but its strength lies in how it blends with the imagery. On a visual level, I felt “The Grandmaster” was PERFECT. I’m a big supporter of movies that show instead of tell, so “The Grandmaster” should be a masterpiece altogether. So why did I spend so much time complaining? Well, it is very talky and while I thought the dialogue was often pretty sharp, it also had the tendency to ramble. Characters talk about nothing, yet I believe in the original cut, they were talking about everything. For me, a film that relies so much on ‘showing’ should not be so dense with dialogue- even if the words are often meaningful and sound nice.

I suspect the original cut of “The Grandmaster” emphasized themes over plot. So the Razor’s importance wasn’t how he effected the story, it was what he represented. When Ip says the (beautiful) line: “But a blade unblocked doesn’t sing” and follows up with an observation that the Razor never forgot the sound his blade made, it’s showing how the golden era of martial arts is over. The grandmasters are all anachronistic. This would’ve made such an unnecessary subplot more meaningful. But the United States version is trying to be more linear, emphasizing the plot points over the themes. It contains enough brilliance to be worth watching, but It’s not brilliant itself. Kar Wai Wong delivered more than enough when it came to creative visual ideas, which were magnificently realized by Philippe Le Sourd (the cinematographer, who deserves an award for his efforts!) and those who were in charge of costuming, music composition, sets, etc. The problem is that the sloppy narrative cannot sustain Kar Wai Wong’s ambitions. I understood that Ip Man and Gong Er were attracted to each-other, but it’s the writings job to show us why. I hope the original version gets released in the west as well, because I would like to see how it compares. I suspect that there is a masterpiece of epic proportions here, but until I see it myself, I can only speculate.

Overall: “The Grandmaster” is more designed for critics than it is for general audiences, but it’s definitely worth watching if you’re part of the target audience. Just expect a more high brow drama that happens to have a lot of kung fu. If you expect something like “Yip Man”, you’re setting yourself up for disappointment.