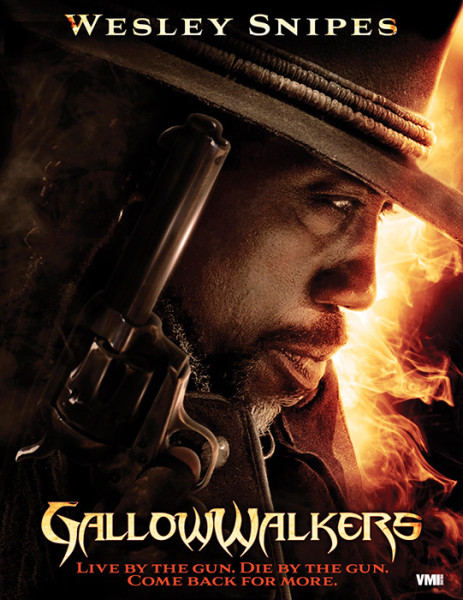 Plot: Aman (Wesley Snipes) kills the men who raped his girlfriend (and then died giving birth from the event), but is ultimately cursed by Satan so that anyone he has killed returns from the dead. So begins his journey to slay the fiends he accidentally created.

“Gallowwalkers” was the movie Wesley Snipes was working on when he was indicted for Tax evasion charges back in 2009. That wasn’t the beginning of the troubled production, nor the ending, but the film wouldn’t see the light of day until 2012. Obviously somebody had little faith in this project and immediately the critics- amateur and professional- used their teeth to disembowel “Gallowwalkers”, while the high brow reviewers ripped off its head with the spine intact. Regardless of the behind-the-scenes drama and negative reception, I was intrigued because I wanted to see Wesley Snipes killing intelligent zombies in a western setting. When I put the feature into my DVD player, my opinions kept changing rather erratically. “Gallowwalkers” actually does contain a lot of good stuff, enough to where you might think you’re in for a solid flick. But just as hope swells within you, the film drives you face first into a brick wall. It hurts.

“Gallowwalkers” put a big smile on my face pretty early on and while it wouldn’t remain there for too long, at least it was ear to ear. I love how it emulated the atmosphere of a spaghetti western, utilizing the right music cues, ambiance, camera angles, sets and rugged faces for maximum effect. The Sergio Leone inspirations are so noticeable that it even borderlines on plagiarism. Seriously, the final duel blatantly rips off the finale of “For a Few Dollars More”, except it lacks the iconic Morricone music. I suppose I should criticize “Gallowwalkers” for stealing, but I’m such a Leone fanboy that I love seeing his style replicated for even crummy movies (“Bloodrayne II”). There is also an excessive amount of gore, which manages to be disturbing even when CGI is used. While many might find the violence gratuitous, I personally felt it added to the films grim atmosphere. But my favorite aspect of “Gallowwalkers” is the costume and character design. Everyone wears stand-out colors, from black to red to white and it makes an interesting contrast with the dusty desert. But the undead creatures look suitably disgusting and a few touches really added to the films memorability factor. I especially love how one character randomly has his mouth sewn shut. That’s just cool! I don’t believe “Gallowwalkers” was based on a comic, but the characters all feel like they came from a comic book. They were all very interesting looking, at the absolute least.

The acting is very uneven, but I did like how even supporting characters had larger than life personalities. Shockingly, the weak link was Wesley Snipes himself. His performance mixes in the stoicism of “Blade” with…an actual personality (any movie he did before “Blade“), but Snipes just felt off the entire time for me. I’d presume this was because his mind was elsewhere at the time. His character is also pretty boring. He’s too powerful. The constant posing for the camera got old as well. My favorite was the villain (Kevil Howarth), who is deliciously over-the-top and evil. He had a lot of fun and I had just as much fun watching him. Some of the minor players are pretty bad, but usually I felt the main problem with the cast was that it was too large. There are so many characters that don’t really add much to the story, or even if they do have some importance, they’re used in such an inconsequential way. The biggest example has to be the son of the late girlfriend. I would’ve liked to know how Aman felt about him, but the kid spent more time hanging out with the useless partner….Fabulos (Riley Smith). Why did Aman recruit Fabulos again? Did Aman actually kill law enforcement to rescue him? Did they become zombies? I guess this leads into the reason why “Gallowwalkers” is not a good movie….

“Gallowwalkers” has a good story to tell, but it’s told rather poorly. The narrative is broken up with various flashbacks, which should’ve been placed at the beginning. The format of the film works like this: Present scene, flashback, present scene, flashback, etc. Each flashback reveals a bit more information, but it’s so clumsily handled that it begins to feel like the movie is making up shit as it’s going along.Sometimes, the transitions between present and past are so vague that it’s difficult to tell when the scene is taking place at first. There are so many nonsensical moments, like when a character encounters some traditional, mindless zombies underground. Who were they and why did they act differently from the rest? “Gallowwalkers” has too many loose ends or plot holes. Maybe the screentime should’ve been dedicated to filling these holes instead of focusing on minor characters whom you think will become relevant, only for them to be treated as a side thought. The sidekick? The whore? The marshal? the Priest? They all have way too much screen-time, yet not enough to justify their presence within the film. I suspect that “Gallowwalkers” was the victim of rewrites and post production tampering. Either that, or they lacked the funds to finish the movie and were forced to cobble what they had together. Regardless of the reason, “Gallowwalkers” is a disjointed mess. 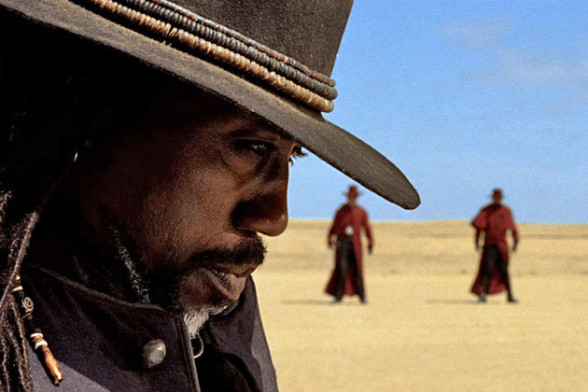 As for the action, I thought the movie was competent when it came to the gun slinging. But the fight scenes were rather sluggish and bland, even though the sand storm was an interesting addition. Many have complained about the pacing, but I personally didn’t find “Gallowwalkers” to be slow- although I wouldn’t call it fast paced either. Yet the problem with “Gallowwalkers” is that it does enough right to get our attention, but then cannibalizes itself with what it does wrong, making the experience seem much worse than it actually was. I REALLY wanted to like this movie, not because of the concept, but because of its victories. I liked the atmosphere, the sets, the gore, the costumes, the locations and the premise had enough quirks to be considered unique. But whether it was a dud from the start or became one throughout its troubled production, the script is an abysmal mess and the action wasn’t good enough to save it. I don’t consider “Gallowwalkers” a bad movie, but I do believe that it’s unforgivably uneven. Still, at the absolute least, I like this more than Wesley Snipes’ other direct-to-DVD flicks. It seems like his films alternate between forgettably mediocre (“Art of War 2“) or boringly mediocre (“Game of Death“). “Gallowwalkers“, for all of its failures, has given me hope that perhaps Snipes can have a respectable direct-to-DVD career. If not on par with the works of Van Damme, then maybe he can at least be the next Cuba Gooding Jr…Believe it or not, Cuba’s direct-to-DVD works have been pretty good…

Nudity: There is brief nudity and a rape scene.

Overall: “Gallowwalkers” isn’t really good enough to pursue, but I think it’s a lot better than people give it credit for.