“Game of Death” is a 2010 direct-to-DVD actioner that stars Wesley Snipes and no, it has nothing to do with the Bruce Lee film of the same name. Some of you might be wondering why Snipes is in a direct-to-DVD movie and I would be happy to explain. Not only was “Blade 3” met with indifference by its audience, Wesley Snipes was so disgusted by the experience that he actually CHOSE to make direct-to-DVD films. He reasoned that he would have more creative control over his projects. This is sort of baffling because his movies since then have been consistently mediocre. Maybe Wesley should’ve fought a little harder on the big screen because “Game of Death” is what we expect when we think of direct-to-DVD actioner: Sucky. 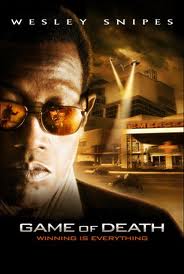 Plot: Marcus (Wesley Snipes) is a CIA Operative whose assignment is to go undercover, working as a bodyguard to a dangerous threat to the United States. It seems to be going smoothly until the target has a heart attack. To make things worse, his second-in-command (Gary Daniels) has turned the team against him. They’ve decided they wanted to steal the mans’ money and figure they have to kill everyone who even sees them, so Marcus has become a threat. The film really is just one big action scene where Marcus chases, fights and gets into shoot outs with his former teammates. Yet it STILL managed to be bore me.

The only real problem with “Game of Death” is actually the issue that sinks the movie, as it effects the script and the direction. It’s just very choppy. This begins with the script, which somehow takes a simple premise and makes it unnecessarily complicated. Marcus is supposed to be telling the story, but he’s often not where the action is and I’m pretty sure he wouldn’t know what the villain is flashing back too while Marcus himself is flash backing (and unconscious). The film didn’t think about the plot holes that this flashback structure brings with it and the Priest subplot ends up just being a useless appendage. In fact, most of the subplots are useless appendages. There is a Nurse who is a hostage whom we think will become Marcus’s love interest, but that never happens. The villains frame our hero for the murders of everyone in the hospital, but that never goes anywhere. There is this weird scene where Marcus walks into a psychiatric ward and the film suddenly becomes surreal with its camerawork. We’re thinking this might lead to something, but it doesn’t. The film sets up a villain who seems to be very dangerous and he gives this epic speech about how he will hunt down the other villains. But they don’t do anything with him either. The guy who had a heart attack boasts about this company who is supposed to be dangerous, but they never really play that up at all! Apparently a few overweight security guards were supposed to kill them “the moment they entered the building“? The film can’t even explain why Marcus is doing everything. They keep asking why he won’t take the money and he never really answers and I guess we just have to presume he’s an honest guy. But why waste so much time on the questions? Also, Marcus has diabetes…Yeah…That was really relevant too.

What’s sad about all of this is it spends so much time with the pointless crap that never goes anywhere that it barely glances over the important stuff and this makes the film somewhat confusing at parts. Then the movie just starts being dumb. When Marcus starts killing off the attackers in the hospital, he does so coldly and without a second glance. We then learn that his teammates just turned on him. Does he respond with surprise or anger? No, he just shrugs it off. But then they start playing up on those dynamics that lead nowhere. Does his former teammates not want to kill him? They offer a deal quite often, but grin and smirk when he’s at their mercy and boast about killing his mentor. In fact, they seem to enjoy killing quite a bit, which undermines the “the CIA is corrupt” social statement that the film wants us to swallow. My favorite part of the movie is probably when Marcus tells the Nurse to pick up the gun and shoot the villain, even though the villain has a gun aimed at her head and is supposed to be highly trained. I’m totally sure that a Nurse can take out a CIA assassin who already has the drop on her! THE FILM IS FULL OF SHIT LIKE THIS! Even Steven Seagal movies have more intelligence than this crap! 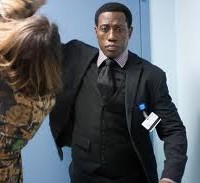 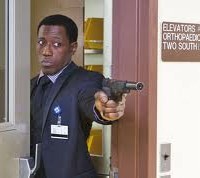 The direction pretty much reflects the script. The director is trying his best to keep things edgy and stylish, but is too much of an amateur to know how to do so successfully. The footage continuously changes into black and white, the editing is constantly shifting into a different angle and even the music seems to be changing every two seconds. In his attempts to be stylish, he just makes things incoherent. Also, why do direct-to-DVD filmmakers rely on the same tricks? Changing filters and distorting the images like this are not examples of cutting edge cinematography! It just looks cheap! As you would expect, this makes the (already wooden) fight scenes fail because the direction keeps getting in the way. I complained about “Fireball” for this, but at least that had good choreography! The choreography here is mediocre. The moves look good, but the fights themselves never achieve a flow and feel staged. It’s too bad that they couldn’t at least up their game for the “Wesley Snipes vs Gary Daniels” fight. That could’ve been interesting…

Is there anything good to say? Eh, there are some decent shots and as I said, a few of the moves used by Wesley Snipes look good. Speaking of which, Snipes does an acceptable job in terms of acting. Unlike Seagal, he still seems to care about making movies so gives it his all, even if this movie demands little from him. I also respect that they somehow manage to keep 95% of the running time dedicated to an action scene or the threat of an action scene. But that, along with the fact that the director is actually “trying”, only makes the disappointments stand out more. Had they smoothed out the script, it could’ve been lean, mean and at least acceptable as a direct-to-DVD actioner. Had the director been more experienced, maybe it would’ve been energetic and exciting. In the end, the final result was a messy, confused lightweight action thriller that reeks of behind the scenes drama. Maybe the script was continuously re-written? I guess it doesn’t matter. It’s choppy when it should’ve been smooth. “Game of Death” isn’t the worst thing in the world. But it sucks.

Violence: Rated R worthy. Nothing too gory, but there is a fair amount of violence.

Overall: Eh, if you like Wesley Snipes that much, you will watch “Game of Death” regardless of what I say. If you’re on the fence though, I’d say avoid it.