DETECTIVE DEE AND THE MYSTERY OF THE PHANTOM FLAME (2010) 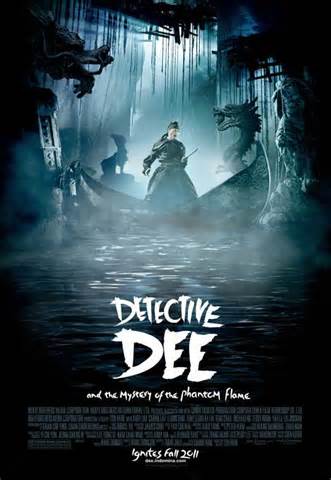 Plot: An imprisoned detective named Dee (Andy Lau) is released under the condition that he solve a string of mysterious murders, where the victims die from apparent spontaneous combustion. It appears these killings surround the inauguration of Empress Wu (Carina Lau), who has made plenty of enemies.

“Detective Dee and the Mystery of the Phantom Flame” might have one of the most ridiculously long titles that I’ve seen in a long time, but it marked a thrilling comeback for Hark Tsui. It’s not that he went anywhere- well, he did go to America for a while- it’s just that his movies haven’t been particularly good or relevant since the 90’s. Zhang Yimou has more-or-less replaced him as the pioneering, great filmmaker of the East. When “Detective Dee” was released, the old master had finally reclaimed the glory of his past. Then he squandered that momentum when he helmed “Flying Swords of Dragon Gate“, which turned him into a has-been again. But what made “Detective Dee” worthy of being placed with the (former) masters greatest hits? Well, for one, it is good. That usually helps…But hopefully this review will adequately explain why I consider this to be one of Hark’s better works.

Critics and viewers alike have dubbed this the Chinese equivalent of “Sherlock Holmes (2009)“, although I think that’s an over-simplification. “Detective Dee” puts most of its emphasis in the mystery, whereas “Sherlock Holmes” was a vehicle to showcase how awesome Robert Downy Jr. is in the titular role. What little mystery there was couldn’t stand up to the awesomeness that was Robert Downy Jr. Dee might be the protagonist, but he’s merely a part of the story, instead of overshadowing it. Andy Lau plays him well, but the movie doesn’t rely on his performance. So both films have very different goals and narratives. However, I understand why so many reviewers use these those kinds of comparisons, because summing up what “Detective Dee” is, is very difficult. Hark Tsui genre-bends like mad crazy, so wrapped in this cinematic package is: Mystery, intrigue, thriller, kung fu, politics, horror, fantasy, comedy and even a dash of adventure, as well as romance. Erm, you know what? I think I’m also just going to say it’s what happens when you cross “Sherlock Holmes” with “Crouching Tiger, Hidden Dragon“…Yeah, I know that makes me a hypocrite, but that’s easier to say and I am incredibly lazy. 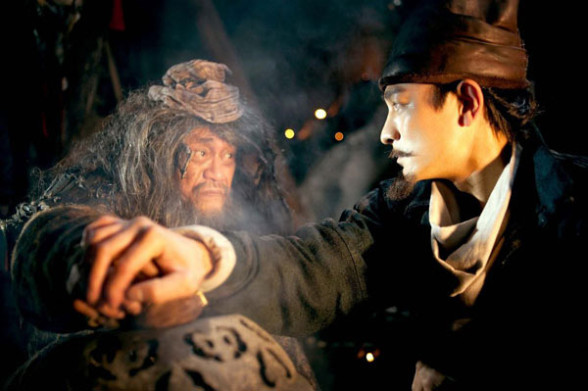 Now, part of my enthusiasm might stem from me being a huge sucker for mysteries. The formula for a good mystery is simple, but also very difficult to pull off. The writer has to challenge the viewer by giving us enough clues so we can try to solve the riddle, without becoming too obvious in the process. I hate to admit that half of the time, I can solve a mystery not based on the clues given to me, but because I know how to spot cliches. “Detective Dee” might not be “The Last of Sheila” in the intellect department. If you have a keen enough eye, you’ll spot who the killer is a mile away. But I didn’t. I can’t fully explain why without spoiling everything, but “Detective Dee” made it work because it’s constantly distracting us from the obvious truth. There are so many red herrings, that I’m pretty sure everyone becomes the primary suspect at least twice. Yet what makes it from becoming too predictable is that most of these red herrings make sense. Plausible explanations are presented whenever someone falls into suspicion, so it doesn’t just feel like the writer is just trying to trick us- even if he is. To make matters even more complicated, Dee is presented with two allies: Jing’er (Bingbing Li), an agent of the Empress and Donglai (Chao Deng), an ambitious detective. Are they suspects? Sure, but even if they’re not the ‘killer(s?)’, they might become enemies for other reasons. This provides suspense, as you don’t even know if his allies are trustworthy. This helped distract me from the truth, so I was caught off guard when the killer was revealed. On a side note, I liked how Donglai was shown to be an exceptional detective himself. He might not be as observant as Dee, but he’s no Lestrade either. On another side note, I felt the romance between Dee and Jing’er was the weak link, primarily as the sexual tension between them only was noticeable in one scene early on. Then it’s completely dropped, before being randomly picked up again. Alas, love stories always seem to be the hardest subplots to incorporate without feeling tacked on or eating too much screen-time. It’s so common that I’m not even sure if it should be criticized anymore.

Hark has always been fond of genre-bending in his flicks, often combining comedy, kung fu and horror all at once. This can- and often does- backfire because some of those genres might contrast too much, disrupting the tone. Or a movie can have a little of everything instead of a lot of anything, which can underwhelm the viewer. Hark makes this work by segmenting the various genres, with the more important ones over-arching the narrative. One segment feels like it belongs in a horror flick, with spooky atmosphere, uneasy suspense and an eerie labyrinth that seems like it was designed to be creepy. I wouldn’t say “Detective Dee” ever became scary, but that segment did provide some shivering moments. It accomplished in about 20 minutes what most horror movies can’t pull off in 2 hours. Then there will be a segment that’s more lighthearted, breezy and comical. “New Dragon Inn” was the last ‘golden age’ Hark movie that I’ve seen, so I’ll draw a comparison with that. It was made in the 90’s, where all Hong Kong comedies were loud and over-the-top. I am not a fan of those kinds of hijinks, but it was trendy back then. But luckily, Hark has caught up with the times and the humor is more low-key, but still very funny. I laughed whenever it tried to make me laugh. All of the genres work like that, so you get a lot of them in small quantities…if that makes any sense… The darker and lighter scenes worked well together because because it’s never too grim or too goofy, even though “Detective Dee” does get more serious as the story progresses. But more importantly, the mystery angle and the kung fu never loses focus, even when the story requires heavy exposition. The actors are not real martial artists, so it was up to Sammo Hung (yes, that Sammo Hung) to make them seem convincing in the fights. Honestly, it was too frenetically fast paced for me to analyze. I couldn’t get a hard look at their techniques, posturing, etc. Maybe that’s for the better? There is a lot of wire works and CGI used for the fights, but I thought they worked within the quasi-fantasy setting. What made the battles click though was the use of gimmicks (stay out of the light!), settings (underneath an elevator! Wait, an elevator?!) and props (dragon mace!). The choreography is designed to use one- or more- of those aspects, which keeps the fights from ever becoming stale. Even though a lot of time is dedicated to fleshing out the story, there is still quite a bit of action, so it’s not just people talking. 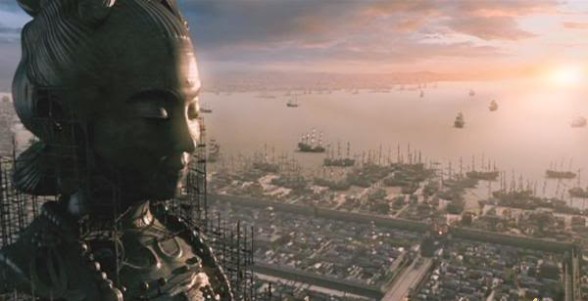 Finally, “Detective Dee and the Mystery of the Phantom Flame” showed that Hark had learned to restrain himself. Whether you like the guy or not, there’s no denying that he tended to obsess about visuals. This worked in his favor during the 80’s and early 90’s, where he helped revolutionize special effects in China. Over time though, his effects started to seem a bit old fashioned.. “Detective Dee” is one of the few films I’ve seen of his where he didn’t lose himself in the spectacle. Don’t get me wrong, everything is over-the-top, from the CGI backdrops, the zany settings and the costumes. Maybe the effects are too polished, but he doesn’t rely on them as much. Instead, he focuses on his engaging story. Then the kung fu. Then the special effects, which are just icing on the cake. This means that 10 years later, when the CGI will start to age, I don’t think it will effect my enjoyment of the film. “Detective Dee” also proved that Hark didn’t have to cater to the trends of its time period, so he had flexed his artistic muscles and they were impressive. Then he directed “The Flying Swords of Dragon Gate“…Ugh…Keep in mind, my criticisms for Hark are reserved for when the quality of his films began to drop. In his prime, the visuals and stories went together nicely, even if the aesthetics were the primary focus. “The Flying Swords of Dragon Gate” relied too much on its questionable special effects, which were often detrimental to the (already stale) story. It wasn’t terrible, but it was what we pretty much expected from Hark these days. “Detective Dee and the Mystery of the Phantom Flame” still manages to remind us that we should not get up hope, because the man can still create a spectacular film. I’d happily endure five “The Flying Swords of Dragon Gate“‘s, just to experience a single “Detective Dee and the Mystery of the Phantom Flame“. So Mr. Hark Tsui, I shall continue to watch your movies, even if they disappoint me.

Violence: It’s PG-13, but I thought it was R-rated while I was watching it. The spontaneous combustion scenes are pretty gruesome.

Overall: “Detective Dee and the Mystery of the Phantom Flame” was a successful marriage between kung fu, mystery and a fistful of other genres. Cinematic polygamy at its finest!