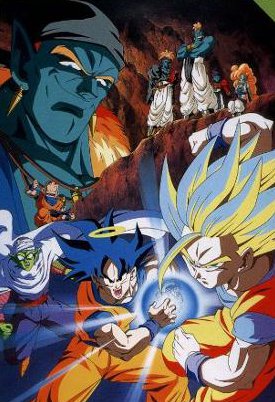 Plot: Gohan and his friends participate in a gimmicky tournament where the fighters battle (fake) aliens, but the fun is hijacked by real aliens- lead by the nefarious Bojack- who want to take over the Earth.

Even though “Broly- The Legendary Super Saiyan” has a lot of detractors, I felt it was a step in the right direction for the Dragonball serial film franchise. It boasted better production values, stories, villains, settings and a more filled up running time than all of the previous entries had. So it only makes sense for the followup, “Bojack Unbound“, to continue in this natural progression by taking two steps backwards…and then two steps forward…before doing two more steps backwards, one more step forward…and then it does the hokey pokey or some shit like that and I promptly forget what the f@ck I’m supposed to be talking about…Oh yeah, this Dragonball Z has just as many failures as it does successes…”Bojack Unbound” is interesting because it has everything I like and dislike about the Dragonball Z serial flicks. This film contains an intense civil war between bad and good, with the winner depending entirely on the viewers personal preferences. But even though it’s really uneven, at least it stands out.

“Bojack Unbound” deserves credit for being one of the more unique DBZ movies. The plot, while not devoid of holes, is at least different. I like how gimmicky the tournament is, especially as that allows room for plenty of unusual set pieces and colorful backgrounds to take the center stage. Aesthetically, “Bojack Unbound” is very nicely animated. It also contains the most surreal visual style since “Dead Zone“, which I’ve always been fond of. The fight scenes are uneven, although the major successes aren’t especially exceptional and the weaker ones are never bad. They range between ‘generic light show’- where characters fling ki blasts at eachother and rely on brute power- and fights which contains strategy and technique- which are awesome. This flick is also incredibly gory. I was often like: “wtf, did Gohan just kick a guy in half“? And the movie would always answer with: “Yes, Gohan did just kick a guy in half”…and then we’d hug. As always, the action is plentiful, but “Bojack Unbound” does strike a nice balance between action, comedy and story. I was always entertained and there were some inspired moments in regards to the direction, especially when it comes to characters making grand entrances. “Bojack Unbound” also has one of the BEST finales that doesn’t rely on a ‘deux ex bullshitina’ conclusion. It made perfect sense within that context. The music didn’t stand out much this time around EXCEPT when it came to the final clash between Gohan and Bojack. I never get sick of hearing that dramatic tune.

This also marks the first time Goku is not the protagonist, since he died at the end of the Cell Games. So Gohan is our new hero, even though Goku does have a minor role. Unfortunately, Gohan merely inherits the problem I had with Goku…He hogs the show. Vegeta, Picollo, Trunks, Tien, Yamcha and Krillin all show up at various points to help out, but they only get to destroy ONE henchman total! Gohan pretty much does everything, wasting the supporting cast in the process. Even though his character arc isn’t fully realized, at least he has one, which makes him a deeper hero than Goku. Yet at the same time…Goku is just more entertaining. Trunks probably has the second meatiest role and…he sucks…as always. He’s just there to primarily get his ass kicked, making him an even bigger jobber than Picollo- who at least has a decent fight with Bojack. Vegeta was also a disappointment, as he gets taken out quicker than Picollo does even though he should be stronger. The film builds up his arrival, but his ‘fight’ is brief and disappointing. Krillin, Yamcha and Tien are taken out too quickly, but at least this is one of the few times where Krillin made me laugh instead of cringe and I do like that they’re at least present. Tien even gets to hold his own against Trunks (in his base form). Unfortunately, Mr. Satan has made his cinematic debut and he’s only funny if funny is codeword for annoying. I can tolerate him in the show…to an extent…but these films play up his most obnoxious traits. As for our villains…they blow. They do look kind of cool, but their designs resemble other characters too much. The space pirate concept was wasted, as you never even see their ship. Bojack is probably comparable to Cell in terms of power, but he has a standard villain personality and he lacks the imposing presence of Broly or Super Android 13. Even “Bojack Unbound” seems to be bored of Bojack himself, because they barely touch upon his yawn inducing back-story and vague motivations. His henchman are so bland that I don’t think half of them even had names. I do like how they emphasize teamwork in regards to how they fight though.

I prefer the Japanese language version in terms of the voice acting, primarily because Goku isn’t around to constantly distract me. Masako Nozawa’s voice in Goku’s body is just too too hard to take seriously, but she’s perfect when voicing Gohan. While I like Stephanie Nadolny’s Gohan as well, I don’t think she can do as much with that Gohan voice. Nadolny nails it when Gohan is speaking normally, but Masako Nozawa’s intense battle cries are more effective. This is especially apparent during the finale. In the Japanese version, Gohan’s screaming is chilling. In the American version, it’s just…not very chilling. The English dialogue is also a mixed bag. I liked the comedic writing, but the exposition is very forced and awkward. Some lines also confused me, like when King Kai informs Goku of Bojack’s genocidal tendencies and Goku responds with: “He sounds like King Picollo“…Ern, that’s the first name that comes to mind? Not Cell? Or Broly? Or…any other villain who’ve fought since the King Picollo arc who has done the same crime but on a much grander scale? Okay… 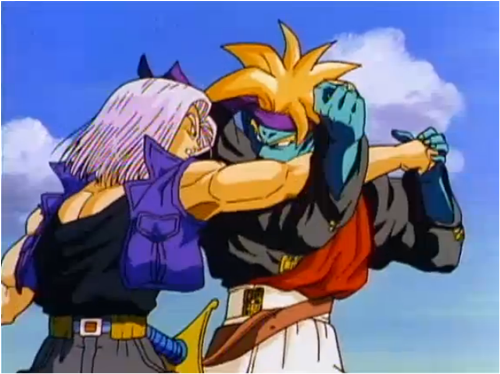 One of the most frustrating aspects about “Bojack Unbound” ties in with how Gohan does practically everything while everyone else is dispatched quickly. In previous movies, the big ‘stupid’ was how the characters wouldn’t enter Super Saiyan immediately once they realize they are facing a formidable foe. Here, I kept getting angry at the television because characters like to stand around while their allies are getting beaten up. Picollo arrives and starts to fight Bojack and his henchman, but what does Gohan do? Watches his mentor get unfairly beaten up! Tien and Yamcha challenge the minions only to get ganged on by three warriors and Gohan assists by…once again, watching…Gohan isn’t even quivering in fear or anything, so it almost seems mean of him to just let his allies get trounced. I think this is because if Gohan and his allies had an organized formation, they probably would’ve killed Bojack’s gang with ease. Either way, it was bad writing and it REALLY got on my nerves…Yet even though it could definitely be ass retarded, gave us too much Gohan and had a villain who somehow managed to be more boring than Lord Slug, I did like the animation quality, the visual style, the action and the unique story. “Bojack Unbound” is a fun little Dragonball flick, even if it’s a step down from its predecessor. I think it stands somewhere between “Super Android 13” and “The Return of Cooler“ in terms of overall quality, being my 6th favorite of the first 9 movies. Wow, the serial films are getting better!

Overall: “Bojack Unbound” was an amicable, but unremarkable experience. But you have to consider its strengths and weaknesses, because your reaction to both will determine whether you will like it.