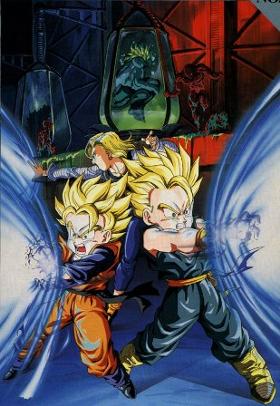 Plot: Android 18 wants the money Mr. Satan owes her, but before she can collect, he receives a challenge he can’t refuse from an old rival- who wishes for Satan to fight his bio-warriors. He reluctantly agrees, bringing 18, Goten and Trunks along to assist him. But much to their horror, it turns out a cloned Broly is one of those warriors.

“Dragonball Z: Second Coming” caused all the followers of Brolianity to get on their knees and pray, because Broly exploded for all of our sins in “Broly- The Legendary Super Saiyan”…and he had finally returned to explode again…Unfortunately, I am a disillusioned follower of the religion, being one of the few people who wondered whether Broly’s works were exaggerated or maybe even completely mythical. For truthfully, his second coming was nowhere near as amazing as it should’ve been. Whereas before he was a terrifying powerhouse who dominated all of our heroes and required an entire planet to be his battle ground, he was now reduced to being pissed on by little kids, unable to kill weaklings and leaving Earth mostly intact. He had become an insane butt monkey! The raping of everything which made the character cool overshadowed the fact that “Second Coming” was just not a very good movie- containing sloppy animation quality and a broken narrative. Yet Broly’s devout followers believed in it because it had Broly, even if that incarnation of the character was a watered down and less impressive version of the original. But just as Brolians adored it, they spat upon the final sequel, “Bio-Broly” and condemned it as heresy. Why? Because Broly might as well not be Broly, since he’s just a swamp creature looking dude with Super Saiyan hair. I guess they do have a point, but it just proves that maybe these Brolians shouldn’t be trusted. “Bio-Broly” might be guilty of exploiting Broly’s namesake, but I think it’s an entertaining serial film which benefits from focusing more on the supporting cast of the Dragonball universe, while also…well, not pissing on the actual character of Broly.

For one, “Bio-Broly” has a MUCH more structured plot than its predecessor. Sure, there’s nothing especially deep or complex about it. But it’s different enough to where I didn’t feel like the writers were recycling past story-lines. The villains have almost sympathetic motivations, the entire Bio-Warrior angle was unique and Broly has a clear and precise purpose within the story. He is the trump card of the Bio Warriors, but unfortunately for his ‘creator’, Broly isn’t someone who can be controlled. That creates a proper conflict. There aren’t any wasted subplots or characters. Everyone has a purpose and everyone does something relevant to advance the story. Now compare this to “Second Coming”, which spent its first two acts fleshing out a plot that had nothing to do with Broly (the villain) or Gohan (the hero). That’s a crap narrative, whereas “Bio-Broly” has much tighter writing. Although once again, the retcons can cause viewers to scratch their heads. I’m also not entirely sure how some of these characters know what a super saiyan is. But that seems to come with the territory.

So why does everyone hate this movie? Some have whined that they wanted Goku or Gohan to be the leads. If you feel that way, then you feel that way, but I’m sick of both of them in those kinds of roles. Goku does practically everything and even when Gohan is the protagonist, he always seems to rely on Goku in some capacity. I want MORE of these movies to flesh out the supporting cast, although admittedly I’d rather Trunks and Goten not be our heroes. But at least they’re toned down compared to the previous Broly flick, where they were obnoxious. Sometimes they even made me laugh. Android 18 gets a strong supporting role, although she looks winded pretty quickly, even though she’s supposed to have unlimited stamina (continuity error). Krillin finally gets his first dignified role since “Cooler’s Revenge”, having a few heroic moments and he’s not just a living running gag. That part goes to Hercule, who is as annoying as usual. As for our villains, most are only there as plot devices and/or joke characters, but I was fine with them. Broly is tricky because yes…this isn’t really Broly. He might as well be Bio Super Android 13. Yet at least I can take this Broly more seriously than the last one. Because of a malfunction, Broly’s power is reduced and that justifies why he doesn’t just blow everyone up- whereas in his previous outing, Broly just seemed weaker even though he was supposed to be stronger. Furthermore, his arrival directly effects the tone, whereas previous Broly was victimized by it. No jokes are done at his expense. Goten and Trunks stop being “funny” as soon as he shows up. Bio-Broly has regained SOME degree of presence that was lost in “Second Coming”, yet fans don’t appreciate this because they want Broly’s…appearance, apparently. It can’t be his personality because even the second film only had Broly screaming and being evil- standard villain traits- so I guess Brolians only like Broly’s looks…Weird.

I like how the film begins as a light hearted adventure/action romp, where the heroes trounce the villains in goofy ways. I thought the comedy, while it did sometimes backfire, was significantly funnier this time around. I enjoyed watching the interactions of the characters and the more comedic fight scenes. Yet when Broly shows up, things get DARK. Broly might not be as strong as he was before, but he’s still stronger than all of the (active) heroes combined. A feeling of dread accompanies him. But it’s the acid goo substance which altered Broly’s appearance that really provides the bite. We see animals and humans alike die VIOLENTLY under its acidic flow. The director usually averts our eyes, but what we don’t see is often just as cringe inducing as what we do. Even though we all know no one will die, “Bio-Broly” still generates tension because the scenarios are deadly and the characters take everything seriously. I was able to lose myself in the illusion that they were in peril, whereas once again, “Second Coming” was more of a farce up until the finale. THIS IS WHAT I WANT OUT OF A DRAGONBALL TONE! It’s comical when things aren’t dire, but once the primary threat arrives, things become more serious. Why fans are so forgiving of Broly getting peed on and missing an attack on Videl is a mystery only Brolians understand. 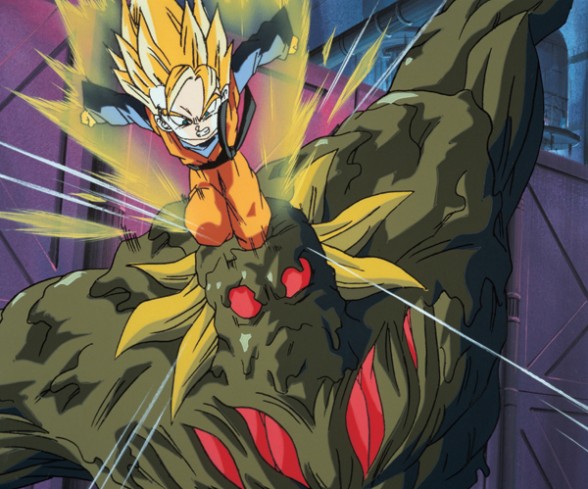 The animation quality is inconsistent. Once again, the backgrounds do occasionally look crude and I noticed there are a few scenes where the characters were off-model. But the locations are unique and the color palette is vivid. While the direction is nowhere near as ambitious as it was with “Broly- The Legendary Super Saiyan”, the visuals are still cooler than anything “Second Coming” provided. The fight scenes are MUCH better than all of the Broly flicks. They’re fast paced, emphasizing everyones speed while actually animating their attacks instead of using the corner cutting speed lines. They’re energetic, diverse and exciting. Granted, it lacks the style and atmosphere which accompanied the action in “Broly- The Legendary Super Saiyan“, but that’s because “Bio-Broly” obviously wasn’t interested in imitating its predecessors. It also didn’t need to be as epic in scale. I also like how the deadly ooze is constantly getting in the way and effecting the various fights, providing tension as it threatens the heroes, villains and the various human fodder. There are even some really cool strategies, which is what really helps the heroes overcome their foe. They don’t rely on duex ex machina bullshit where Goku draws in everyones power or is mysteriously, temporarily brought to life for reasons which are vague. Broly is simply conquered because he was outsmarted…He was defeated by…*gasp*…decent writing! But don’t tell the Brolian fanatics that. They might get angry because Broly lost.

So it baffles me that “Bio-Broly” doesn’t get its place within the book of Brolianity…okay, seriously, I’m going to stop this religious satire stuff. The subtitle of ‘Second Coming’ was the greatest contribution from the tenth Dragonball flick as it’s easy to make fun of while also sounding pretty cool, so I couldn’t help myself. I liked that “Bio-Broly” focused on different characters, had a relatively unique story that never got in the way of the action and had excellent fight scenes. It had an effective tone and even though Broly isn’t really Broly, I could still take him more seriously than the Broly of “Second Coming”. I just thought it was a much better flick than its predecessor, even though neither come close to comparing with the original. So yeah, I’m alone in my appreciation of this movie, just as I’m alone in my damnation of the previous movie. But I think “Bio-Broly” is criminally underrated.

Violence: It can get pretty nasty.

Nudity: Child nudity once more, and we see Broly’s backside.

Overall: “Dragonball Z: Bio-Broly” is often regarded as the worst Dragonball Z serial film, although I believe people hate it for the wrong reasons. I think it’s pretty good.