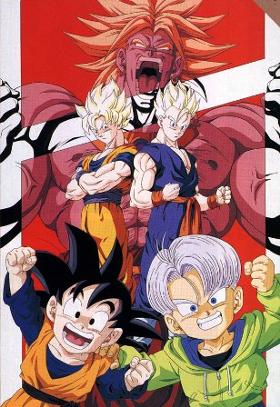 Plot: Goten and Trunks- the sons of Goku and Vegeta- are hunting for the dragon balls, along with Videl (Gohan’s girlfriend). But they accidentally wake up Broly, a former foe of their parents, who goes on a rampage. Can Gohan, the new hero of the Dragonball universe, save them in time?

“Broly- Second Coming” offers a rather standard storyline, filled with some noticeable contrivances, clichés, and retcons. But it’s pretty funny because this silly little story about a monster terrorizing a village, which takes up an obscene amount of screen-time, is suddenly hijacked by the appearance of Broly- who has nothing to do with what wa going on. Later, Gohan hijacks the plot from Trunks and Goten, who had previously been the established heroes. In essence, a good 60-70% of this movie was completely pointless, because all of the previous story is thrown out of the window so we can get some ‘Gohan Vs Broly’ action, even though neither character was set up to by the hero or the villain during the first two acts. Sure, this is pretty bizarre writing, but it’s so goofily inept that I can’t help but smile…until I remember how much everything else about “Broly- Second Coming” sucks…Ugh, the filmmakers dropped the dragon ball with this one. “Broly: The Legendary Super Saiyan” wasn’t only considered the high point of these serial films, boasting awesome production values and a more intense plot. It also had one of the coolest, most terrifying villains the heroes had ever faced- both in canon and anime exclusive content. He might not be the most powerful villain in the Dragonball universe, but even Majin Buu and Cell lacked the presence of the Legendary Super Saiyan. Broly’s popularity soared so high that they obviously had to bring him back somehow. Unfortunately, “Broly- The Second Coming” pisses on the legacy of its titular character by well…having the titular character actually getting pissed on. EVERYTHING that made its predecessor so effective is completely reversed, as we are treated to awful animation quality, an annoying comedic tone, limp action sequences and a villain whom we can no longer take seriously.

I will give “Broly- Second Coming” credit for at least having a good score- a consistent praise amongst the franchise. The music generally matches the tone, is pretty catchy and enhances the events taking place. Unfortunately, that is the only plus that returns from Broly’s debut. The production values seem minimal, suggesting either the filmmakers had no money or time in order to produce memorable visuals. The backgrounds often look crude or unfinished, which is especially noticeable during some of the close-ups. In these cases, behind the character will be a single, flat color, a flaw I haven’t seen since from these serial films since “The World’s Strongest“. Much like “Broly- The Legendary Super Saiyan“, the fights are mostly sluggish. Everyone seems to be moving slowly whenever they clash, or they will suddenly morph into speed lines. Admittedly, Gohan’s first fight with Broly is pretty good. Otherwise, the action moves at a snails pace and the battles are all one-sided or intended to be comedic. Much UNLIKE “Broly- The Legendary Super Saiyan“, there’s no sense of scale among the action, no inventive angles or anything resembling atmosphere- all of which had previously made up for the slow paced fighting. A lot of the problem is that the director must’ve forgotten what made Broly so compelling to begin with. His power was so great that planets were in danger simply because of his presence, but what can he do on Earth? It can’t be destroyed and it can’t take too much damage. The entirety of Neo Vegeta was his battleground in his last reign of terror. Here, the battleground is just lake and a mountainside. It just seems so insignificant in comparison. To be fair, even if Broly destroyed the f@cking planet, his image would’ve been far beyond repair. Remember how he was frightening during his first appearance? Remember how he took on FOUR Super Saiyans AND a Super Namek all at once? That was epic, so what do we have for Round 2? Ugh, I assure you it won’t be anywhere near as amazing. Having Broly constantly being humiliated by Trunks and Goten, whether they’re mooning him or peeing on him or even landing some good hits on him just tears down Broly’s established badassery. I can’t take him seriously anymore. Not only does his power seem to be WEAKER than what it was, the heroes couldn’t have been threatened by him because they don’t enter Super Saiyan immediately. I thought we were past this phase! Does Gohan really think he can fight a Super Saiyan in his base form? Did he even enter Super Saiyan 2 because that looked more like Super Saiyan 1!? Goten and Trunks are also reluctant to go Super Saiyan, which makes NO F@CKING SENSE! They stopped doing that crap two movies ago! How can there be any suspense or tension if the villain has been reduced to being a joke? Granted, “Broly- Second Coming” is trying to be more light hearted and funny, but then they should’ve created a new villain to match that tone. Plus, the comedy only induced headaches within me. 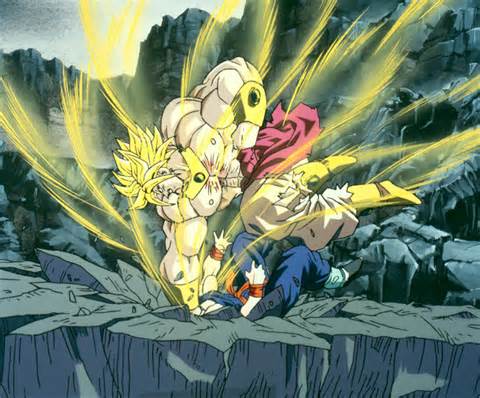 Broly sucks. Not only has he lost his presence, but his personality has been stripped down to one personality trait: His obsession with Goku. He yells “Kakorat!” a lot, occasionally smirks arrogantly or becomes angry. That’s the extent of his characterization. He went from being one of the more fleshed out, intriguing and impressive villains to being more dull and generic than Lord Slug. Although he’s still not as boring as Dr. Wheelo. I guess Broly will always have. As for our heroes, Goten and Trunks are just annoying. Any attempt to make these characters funny just gets on my nerves and yet they have the most screen-time. They also don’t take Broly very seriously either, even after he’s established to be their superior in terms of power, so it’s like they never shut the unholy f@ck up! Once Gohan takes over, the tone inexplicably darkens, making one feel like they are watching two separate movies. Gohan is alright, although if you watch the Japanese version, his high pitch voice seems so out of place. He is truly his Father’s son. One thing I dislike about him is how he always rely’s on Goku (who only appears at the very end) in order to finally conquer the villain of the week. I’d rather him win on his own, although I guess this is balanced with the fact that Goku had to defeat the majority of his foes in these movies by drawing on the power of everyone else. Shockingly, I really liked Videl, even though her presence is both a life saver and problematic, all at once. The problem with her is she seems way too powerful, even being able to dodge an attack from Broly. Ugh, she even does better than Krillin (he has a cameo), who should be LEAGUES stronger than her. Yet she has a fun personality and I wish she had more interactions with Gohan. They do make an entertaining couple. But no, they had to spend more time on villagers who have nothing to do with Broly or our heroes. Ugh.

I’m not sure if I’d call “Broly- Second Coming” worse than “Lord Slug“, but it made me angrier. It’s ugly to look at, contains boring action sequences and the comedic relief is FAR more irritating than anything the serial films have provided so far. Yet above everything, it resurrected the coolest villain while removing everything that made him cool to begin with. Shockingly, I seem to be alone in my hatred, as most fans find this to be an acceptable sequel. Honestly, so did I when I first watched it. I suspect that if anyone enjoys “Broly- Second Coming“, it’s out of blind devotion to the character. I saw nothing of value within it, other than an admittedly cool title. The music is nice, but every serial film has delivered that as well and the baffling storyline only pleases  me somewhat BECAUSE everything else sucks. If this was a good movie, I probably would’ve condemned that too! But Broly was given one more shot to terrorize the heroes…sort of…in “Bio Broly“- which is often regarded as the WORST in the franchise. Is it? Based on my original viewing, no. But also based on my original viewing, “Broly- Second Coming” was not a piece of crap. So my original viewings are useless.

Violence: It is fairly grisly.

Nudity: Child nudity…baby penis and Trunks shows off his ass…Jeez…

Overall: “Broly- Second Coming” is the worst of the Dragonball serial flicks so far, even though it has its fans.