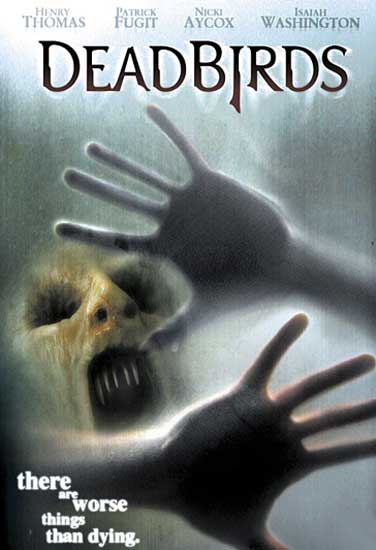 Plot: Six Confederate deserters steal gold from their own army and hole up in an abandoned plantation. But predictably, the place is haunted and they start going crazy from the weird shit that occurs.

I’ve currently been on a War-Horror hybrid binge and I just noticed how all of these movies take place during different wars. So far, I’ve seen ghost stories take place during World War I (“Deathwatch”), World War II (“Below”), The Vietnam War (“R-Point”) and now I can add the Civil War to my list with “Dead Birds”, a movie that is not about dead birds. Actually, the more I think about it, maybe I should refer to these hybrids as military-horror. As this earned a respectable reception, I felt tingles run down my spine as I put it into my DVD player. As the movie went on, those tingles of excitement turned into tingles of irritation. “Dead Birds” is a sloppy mess that thinks it’s scary, but the sense of unease dissipates before the first half of the movie is even completed. It also wastes its concept, which perhaps is the most damning complaint coming from a fan of Military-Horror features. Grrrr.

“Dead Birds” is more of a western-horror than it is a Civil War-Horror movie, although that’s not a bad thing either. I’m a sucker for hybrids in general and to me, scary westerns are also shamefully rare among their genres. But what bugged me was how at its core, this could’ve easily been a modern day movie about a dysfunctional family inheriting a cursed house. Whether it be “Haunting in Connecticut”, “Dark Mirror”, “Wicked Little Things” or…any of them, “Dead Birds” more or less is the same thing with Outlaws instead of a family. One starts to see things, no one believes them. They bicker and bitch, ignoring the others pleas to leave the house. They start to investigate and conveniently, they learn everything they need to know before the horror is up. This might as well have been “The Messengers”, except everyone is cosplaying as Outlaws. 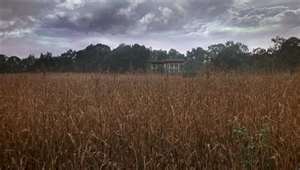 With the exception of the opening sequence, the western (or civil war) motifs are removed from the story. It’s just a bunch of dudes walking through the dimly lit house, that doesn’t even look very dilapidated, until either the scene will get bored of itself or a demonic face suddenly appears. “Deathwatch”, “R-Point” and “Below” used their settings and gimmicks rather effectively, making that part of the horror and story. The only properly utilized western element in “Dead Birds” is the cornfrield (which is a little spooky). You could argue the ‘sacrificing of slaves’ subplot, but there has been many modern day, suburban horror films where the ‘curse’ came from the past. In short, “Dead Birds” didn’t NEED to take place in the civil war. The bulk of the movie takes place in the house, which doesn’t even look THAT old fashioned. It wastes its own concept, which bothers me more than anything.

The following paragraph is subjective, as the same arguments could be used against the other Military-Horror films which I’ve mentioned and praised. What scares us or creeps us out is personal- not practical- so you could’ve found those films to be boring, while believing “Dead Birds” to be scary. I understand and respect that, but the terror here never really rubbed off on me. It has its moments, but runs out of steam pretty quickly. The plantation looks relatively normal, which may have been the intent, but it ceases causing my skin to crawl almost as soon as they enter it. The dark, almost reddish lighting starts off kind of cool, but loses its potency as every scene seems to be handled this way. The film is trying to be scary, but whereas “R-Point”- for example- manipulated me with its suspense, this one just has its characters walking slowly as they investigate. Most successful military-horror features had me feeling like something horrifying might be behind every corner, but “Dead Birds” never evoked that level of dread from me. It was trying too. Characters would become more afraid and agitated as they stalked through the house, not noticing the camera panning in on them and the ominous music playing in the background. It had the pieces, but just failed to connect to me. More annoyingly, the film just continues to re-use the same kind of jump scare, which is a demonic face appearing out of nowhere. How many times do we need to see a kid standing there and suddenly he lunges at the camera while his face distorts into something monstrous? It got old. “R-Point” at least gave us many different kinds of scares- some subtle and some heavy- so it never lost its creep factor. “Dead Birds” uses up all of its tricks early on. Finally, why the hell was the CGI here? It seemed out-of-pace and CGI in general generally doesn’t work with horror films. Especially BAD CGI.

The script is pretty weak too. I thought the characters were fleshed out enough and unlike “R-Point” (which I keep comparing it too), they never got on my nerves. In fact, I thought the acting was pretty good and its nice to see a fairly respectable cast appearing in a horror film. But there is a lot of wasted development surrounding them. Our protagonist, William (Henry Thomas, the kid from “E.T”), accidently shot a kid and feels guilty about it. Do they ever follow through with that? Nope. It’s one wasted scene before being forgotten. It’s implied that his brother, Sam (Patrick Fugit), is in love with William’s girlfriend Annabelle (Nicki Aycox). Does anything come from that? Nope. Or what about Clyde (Michael Shannon) and his racist feelings towards Todd (Isaiah Washington), or his intentions on stealing the gold? You expect a pay-off but never get it. It can be argued that all of this was done to give the characters some personality, but most of this kind of development requires relevance. There’s a difference between a character having guilt about war crimes- which is background information- and unintentionally murdering a kid during the start of the movie. The former is just part of their characterization, the latter should be part of an inner journey. I wouldn’t spend so much time on this, but it eats screen-time.

I found myself with a lot of unanswered questions too, such as “why is this happening?” or “what happened to ‘insert characters name here’?‘” or “what was the point of that?” or “how did this happen?”. Nothing really makes sense and some of the “twists” are just cheap. Now isn’t “R-Point” guilty of the same thing? The difference between the two is that “R-Point” seemed intentionally ambiguous, like it MIGHT have been carefully crafted and just needs to be watched more than once. “Dead Birds” seems like it’s making shit up as it’s going and the ‘twists’ only appear to cover up the weak writing and constant plot holes. Maybe they are trying to be mysterious, but they explain too much (in typical American horror movie fashion) for that to be acceptable! Go one way or the other! “Dead Birds” didn’t strike me as clever or well thought out, but it desperately wants you to think that it is. Oh yeah, did I mention that it’s pretty easy to tell who is going to die and when? *Sigh* 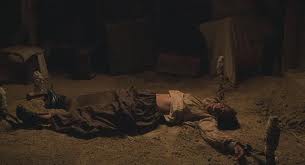 Wow, you know, I really did not mean for this review to be so negative. I don’t hate “Dead Birds”. It’s not offensively terrible or boring. While watching the feature, I kept feeling like it was going to get better. But even at its worst, I never thought it was unwatchable. It has moments where I was into it, where it made me jolt or caused me to shiver. I dug the unflinching violence and something about the slave subplot made my blood curdle. The practical effects are pretty nasty and that weird, hairless, creature design was cool. Hell, most of its mistakes- both in terms of direction and story- are very common within horror features. Unlike most horror movies, it seems to have a reasonable budget, with a solid cast and a flare of ambition. But I think my biggest issue is at its core, it’s an ordinary horror film. It teases us with the civil war/western setting, but doesn’t make much use of it. It’s a mediocre horror film that had the potential to be more, but opted not too. That’s the point I want to make. “Dead Birds” uses its concept as a marketing ploy, because it’s really just like every other ‘mysterious, haunted house’ movie ever made.

Nudity: None, but there is off-screen sex.

Overall: “Dead Birds” might be worth watching if you’re interested in Military-Horror movies, but I personally didn’t care for it.