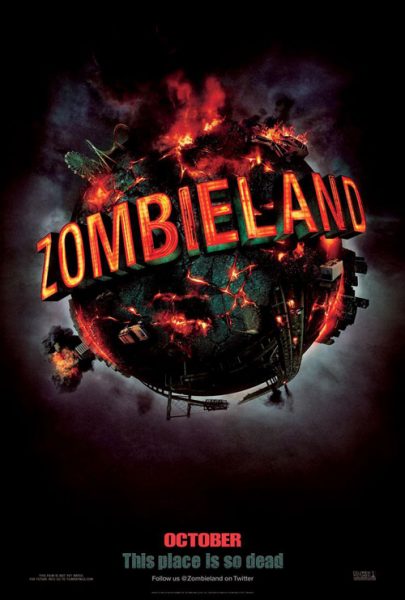 Plot: The world has been overrun by zombies and a small band of survivors unite to…visit an amusement park.

Note from Author: This is a cleaned up version of my original freewebs review and it should be noted that this was written during a time where I was merely adequate as a reviewer- if even that. For time conserving reasons, I chose not to formally re-do this.

“Zombieland” is a hilarious, gory, intense and thoroughly entertaining genre piece that everyone can enjoy, not just fans of splatter and zombies. I was expecting to enjoy myself based on the incredibly fun trailer, but little did I know that this would be one of my favorite films of 2009. “Zombieland” begins after the zombie apocalypse has already occurred, with Columbus (Eisenberg), a zombie savvy ex-nerd trying to get to…Columbus, hence the name. He quickly comes across Tallahassee (Harrelson), a reclusive bad-ass whose love of killing zombies is only outmatched by his love of…Twinkies. Right. They decide to travel together, but come across two girls, Wichita (Stone) and Little Rock (Breslin). The two girls trick them, stealing their weapons and ride. Yeah, if you haven’t noticed, these aren’t their real names. Most of them are named after their destinations, as if they had no past before the zombie apocalypse. I like that little touch. They decide to head out to an…amusement park. Seriously, a Twinkie loving badass, a zombie savvy nerd, and two con-artist chicks are trying to survive the zombie onslaught to get to an…amusement park? Who makes this up? It is absolutely SHEER GENIUS!

“Zombieland” not only made me laugh, it made my entire theater laugh as well. The dialogue is crisp and witty, almost Tarantino-esque in its execution. The sight gags are both gross and amusing. Then there are the genre winks that the film gives us, stuff designed to please the target audience. The funniest examples are the zombie rules, for they will have any zombie fan (such as myself) in stitches. But most of all, the humor isn’t only pandering towards its base, it’s designed for mass appeal. Even if I wasn’t familiar with the genre, I still would’ve found all of this amusing. Of course,that doesn’t mean that everyone will like it, as comedy will always be subjective. But I suspect that most will find its style of humor to be endearing. 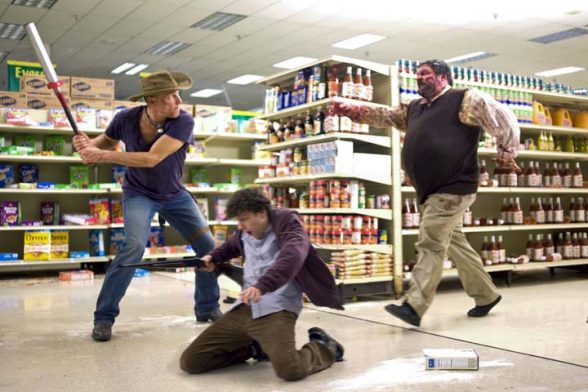 It’s hard to have a zombie film and not have the gore, and “Zombieland” delivers in its grotesque goodness- although we’re not talking Fulci or Romero graphic. The movie has its gory moments, but the nausea factor is upstaged by the creativity of the kills, for the filmmakers have come up with far too many ways to kill a zombie. There aren’t many human deaths, with most of the violence being directed at the undead, but this was fine because “Zombieland” is striving to be comedic, not scary. Yet the filmmakers are full of surprises. We know that it delivers the gore and laughs, but it actually had a few great dramatic moments as well. With all the fun the movie has with its zombie killing, it reminds us of the underlying sadness that this apocalypse has brought upon humanity. The film touches upon how isolated we become when we take things for granted. It takes a zombie plague and humanities’ destruction to bring people together. Their obsession with reaching the amusement park is so they can relive a more innocent time and I found this to be genuinely moving.

A lot of the success of the movie boils down to the chemistry between the actors. Everyone does great and I mean EVERYONE. Woody Harrelson (Tallahassee) probably will be remembered the most, because he has the coolest role. Not since Bruce Campbell has anyone looked so good slaying corpses. This man is simply awesome. Jesse Eisenberg (Columbus) is the audience surrogate and is technically the protagonist, so he doesn’t stand out as much as the rest. Nevertheless, he turned in a great performance and has even better chemistry with Harrelson. Emma Stone (Wichita) and Abigail Breslin (Little Rock) are both effective, each having their moments to shine.

“Zombieland” has minimal plot, but it doesn’t need anything more. It is about a group of people who are going on nostalgia trip through the zombie apocalypse. Along the way, we get lots of guts and even more laughs. Newcomer Fleischer gives a stylish directorial debut. I was worried from the trailers that he would overuse the slow motion, but  all of that is reserved for the opening credits. There are some minor flaws. The pacing gets choppy between the 2nd and 3rd act, and I couldn’t help but think that the idea of turning ‘on’ an amusement park with all those zombies around is kind of stupid. But hell, I’m willing to endure those a thousand times because the rest is so great. “Zombieland” scores every point it strives for, whether it be emotional, comical or…zombiefal.

Violence: Rated R. Very gory, but not as graphic as I expected.

Nudity: There is a stripper zombie in the opening credits and she’s wearing very little.

Overall: “Zombieland” is one of the few zombie flicks that I’d recommend to everyone.