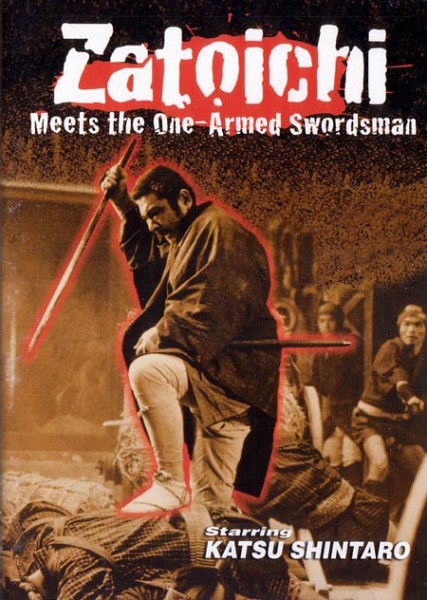 Plot: Blind swordsman Ichi (Shintaro Katsu) continues aimlessly wandering until he crosses paths with a one-armed swordsman named Wang Kong (Jimmy Wang Yu), who is a fugitive for slaying peasant massacring samurai. Ichi decides to help the man, but the language barrier leads into misunderstandings which will pit the two against each-other.

The plot, at its core, is very familiar. It’s not just about Ichi’s conflict with Wang, because there is a lot going on. You have corrupt Samurai, a Yakuza boss who Ichi is destined to pwn, a prostitute (Watako Hamaki) who inevitably falls in love with Ichi, a blind gambler (Shinsuke Minami) and a handful of others who will be dragged into this epic showdown. Yes, the story is convoluted with unnecessary characters, but I found myself liking the characters so much that I could forgive these pointless divergences. The prostitute is one of my favorite Zatoichi heroines, the blind gambler is hilarious and everyone else is so endearing that I felt bad when they found themselves on the wrong side of the blade. What makes the story more unique, however, is the language barrier dilemma. Wang’s Japanese is about as good as Ichi’s Cantonese, so they have no idea what the other is saying. Some of these misunderstandings are pretty funny and others are quite deadly. I felt Ichi was a more fleshed out character than Wang was though. Ichi showcases a more vicious side than usual and when he’s pissed, he becomes SCARY. Wang just is fighting for survival and even though he says he come to Japan to escape violence, his arc is rather bland in comparison. The movie never even draws attention to his missing arm or his broken sword. Jimmy Wang Yu’s acting is fine, but he doesn’t have much to do. There are also some odd loose ends, like did they ever actually reveal who the first informant was? Maybe I missed that, but there isn’t a pay-off to that plot device.

The action is definitely one of the films more…eccentric attributes. Whenever Jimmy Wang Yu would draw his sword and kick some ass, it just is awkward to watch. It always seemed like his opponents were slowing down their movements in order to fight him, he kept dropping his stance and it looked like he was fighting against his own disability. Wang has supposedly been fighting with one arm for awhile, but it just always looked like he was struggling with that. Why is it he seemed so fluid in “The One-Armed Swordsman” and “Master of the Flying Guillotine” (he only has one arm in both movies), but not here? Well, to understand this, you need to understand the differences between the styles of choreography. With Japanese Chambara flicks, the techniques are a lot faster, the battles are a lot shorter and a lot more intense. With Hong Kong kung fu flicks, the fights were more elaborate, took more time, showcased more techniques and the movements were slower (in comparison; this was before the age of Jackie Chan). Jimmy Wang Yu was well versed in the latter, but not in the former and it shows. If this was a Chinese production, Shintaro Katsu would be the one struggling.

The filmmakers try to make up for this by adding in a gimmick where Jimmy Wang jumps really high. It looks silly, but at least it adds diversity to their different styles. Speaking of which, is the final battle any good? It’s…interesting. Like all of Jimmy Wang Yu’s previous battles, you do get the impression that Shintaro Katsu is slowing down his movements in order to make things easier for him. But at the same time, it does contain more actual choreography than the majority of Ichi’s battles. Usually the final fights end abruptly, which was my biggest complaint regarding “The Tale of Zatoichi”. But this clash of the swords is much longer than the norm and it’s nice to see Ichi not totally curb stomp his opponent. By the end of the battle, whether he wins or loses, he’s clearly injured himself. My biggest issue with the ending is how the story resolves itself. How Wang realizes Ichi is not a bad guy is…stupid. The remainder of the fights are fairly standard, although the director loves his blood spurts. There is also a lot more action than usual and I do appreciate how the villains use strategies to combat Ichi.

“Zatoichi Meets the One Armed Swordsman” definitely feels more like a marketing gimmick than a work of art, although the director occasionally produces something brilliant. I especially love that shot where Ichi stabs someone through the wall and blood splatters on it from the other side. There are also a few inspired dialogue exchanges which mesh with the music perfectly, creating an almost haunting atmosphere. But the remainder of the direction is competent, if unexceptional. But I adore this movie for its characters, its thematic material and its action- even when the action is a bit clunky. In fact, this is one of the few films where part of my even likes its flaws. It’s as if they help add to the films identity. “Zatoichi Meets the One-Armed Swordsman” is one of the more entertaining entries within the franchise, even if it lacks the finesse of its brethren.

Violence: I don’t believe it’s rated, but it’s probably worth the R. There is quite a bit of death and blood.

Nudity: Ichi has sex, but it’s off-screen. It wouldn’t be until the last movie where we get an Ichi sex scene (shudders).

Overall: “Zatoichi Meets the One-Armed Swordsman” is a personal favorite of mine, flaws and all, because it’s different enough to stand out. I am probably being too generous with the rating, but I just really like it.