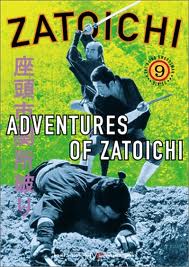 Plot: Blind swordsman Ichi wanders into a festival town in order to celebrate the new year, but instead he must find the missing father of a woman named Saki (Miwa Takada), while dealing with corrupt gangsters and magistrates.

“Adventures of Zatoichi” is the 9th entry in the long running franchise, although it managed to elude me because I kept getting it confused with the TV series that had been produced. Predictably, it has nestled snugly against the other entries that are so generically good. Is that even a real phrase? “Generically Good” almost sounds like “Awesomely Bad”, although since “Troll 2” exists, I suppose those kinds of oxymoron’s can exist. “Adventures of Zatoichi” looks and feels like every other Zatoichi film, but I also believe it has more depth than most of its contemporaries. That’s not to say this one is deep or the other movies are shallow. But its use of drama is rather unique.

I’m not sure whether or not Kimiyoshi Yasuda knew how treacherous the waters he was about to sail upon were. Tone is one of the trickiest parts of film-making, unless your movie comes from Hong Kong, where rape and slapstick comedy happen to be best friends. “Adventures of Zatoichi” isn’t as extreme, but it does tend to blend tear jerking heartbreak with goofball comedy rather seamlessly. It’s almost subtle about it too. The characters might be silly at times, but the movie is never silly. The characters might be sad at times, but the movie itself is never depressing. It’s as if the director perfectly captured how erratic human emotions are and let them speak for themselves. Usually directors tend to manipulate us using music or cinematography, but here he just lets it all happen.

On one hand, Ichi tends to be incredibly optimistic. When he says how Saki shouldn’t lose faith, it warms our hearts. Ichi crosses paths with an old drunk, who might be his Father. It’s very moving, but reality is more pessimistic than Ichi is and these subplots don’t have happy endings. But they aren’t gloomy either. “Adventures of Zatoichi” isn’t quite as dark as “Zatoichi’s Vengeance”, but it points out that Ichi’s heroics sometimes aren’t enough to save the day. One of the most effective moments occurs when Ichi has to break some bad news to a character, but can’t bring himself to do so. His previously inspiring speech has backfired and his sword can’t fix the situation. It is a dilemma that Ichi rarely has to face.

“Adventures of Zatoichi” offers some neat little tidbits too, although some of these are also criticisms. I felt the subplot with Sen (Eiko Taki)- whose brother possibly connects all of these stories together- was hastily resolved. But I loved how they build up this one Ronin as a potential threat, only for him to pretty much say “Screw it. I’m not getting paid enough for this” before abandoning the plot. Various side characters didn’t feel necessary, like a pair of bumbling vendors or a group of kids, but they added enough comedy to become endearing. The direction is solid, with the finale battle being downright chilling. The low key- almost horror-esque- music and the heavy ambiance was quite creepy. This is one of the few times we see Ichi being aggressive during battle, striking first. I wouldn’t call “Adventures of Zatoichi” action packed, but the Chambara sequences are spread evenly throughout the feature and I was never bored. So “Adventures of Zatoichi” is familiar in set up and structure, but there’s enough fresh material so it’s not redundant. I liked it!

Violence: PG-13. Lots of death, but not much blood.

Overall: “Adventures of Zatoichi” is another worthwhile entry in this great franchise, so why wouldn’t you watch it? Well, I suppose SOMEONE has to dislike the series. But that someone isn’t me!