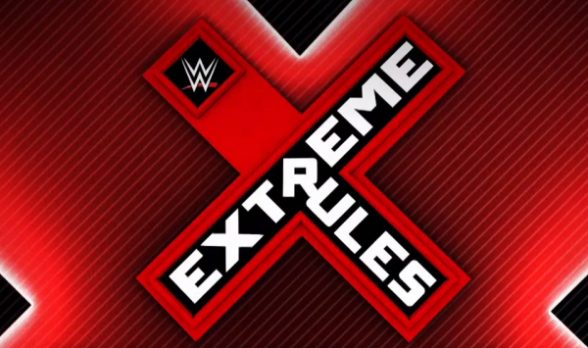 Previously at “Payback“…WWE delivered a good PPV, albeit a relatively safe one…which perhaps is a poor choice of words considering the real life injury Enzo sustained during his #1 contenders match…No Titles changed hands, but the show primarily focused on building up the angles for the following PPV and the subject of this writing- “Extreme Rules“. It just so happened that the matches were really, really good, distracting us from the almost RAW-like presentation.

RAW (5/2/2016): Due to time constraints, I watched this episode piece-by-piece over a 2 week period…I can only remember a handful of things actually happening, such as the Jericho/Ambrose feud developing even further thanks to Stephanie McMahon, the Natalya/Charlotte program actually becoming kind of interesting, Cass teaming up with the New Day and the Main Event (Roman Reigns, Usos Vs Styles,Bullet Club- it was solid). I looked up what else happened and…the show was fine. It was only sporadically compelling, but nothing ever bored or angered me.

RAW (5/9/2016): This episode had some good stuff and some REALLY F@CKING OBNOXIOUS stuff. For one, I really enjoyed the post-match psychological battle between Roman Reigns and AJ Styles, which upstaged their solid 6-man Tag Team Elimination bout (Usos, Reigns Vs Bullet Club). I also liked seeing Sami Zayn fight his way into the Intercontinental Title scene, while Ryder was given a chance if he won his match against Owens (he didn’t; which I liked even more). On the downside, the main event was infuriating, as it was supposed to be ‘Jericho Vs Cass‘, but Ambrose ruined it before the match could even start. I really wanted to see that one…and why would this be the main event? Wouldn’t the Reigns/Styles brawl function as a better finale for the show? Everything else was fine, but I’ve already begun to forget about it…Seriously, I just watched this damn show and I can’t even remember how it began!

RAW (5/16/2016): It was awkward when AJ Styles announced that he was tired of social media lying about him and he pointed to the titantron to show us examples, but instead we only saw fans’ excited tweets about how the ‘club was back together’- something Styles himself has said. It made him seem kind of whiny and was the first time when his limited mic capabilities really stood out since joining the WWE. I really liked the Jericho/Ambrose segment, even if the background music was sort of cheesy (albeit in a somewhat endearing kind of way). I found the New Day segment to be funny, even though the crowd didn’t seem to know what to make of it. I wasn’t crazy about the Bullet Club/Uso rematch, as I’m already tired of their pairing and think it was stupid to have the Bullet Club loose so shortly after debuting. I thought it was kind of cool to have the night end with the Women’s Championship contract signing, although the exchange just seemed to be a rehash of past words (props to Charlotte for getting the crowd to boo her though; and was Stephanie cheered after attacking Ric? Impressive). I generally enjoyed the promos and story-oriented segments, but the matches themselves just didn’t connect with me. Not bad, but I found myself mostly uninterested in the actual action. Weird.

(Kick-off Match) Dolph Ziggler Vs Baron Corbin– The last time I saw either of these men, they were having their “Payback” bout…So the entire second chapter of their feud was edited out from RAW by Hulu, meaning this match has no emotional stakes for me. At least this rematch was better than their first one, even though it’s still pretty bland. I feel like Corbin’s size isn’t being emphasized enough, while Ziggler’s athleticism is downplayed. It was a thoroughly watchable match, but I won’t remember it. Nor will you. I found the Cass/Dudleyz confrontation to be the highlight of the Kick-off show. Plus, Corbin was forced to play dirty in order to achieve the victory, so does the win really mean anything for him?

The Bullet Club Vs the Usos– Most of this feud was designed to add tension to the ‘Roman Reigns Vs AJ Styles‘ program and it worked, although it wasn’t especially compelling on its own. I was only mildly interested in this, because it seems like these teams have had matches every week, but at least the ‘Texas Tornado’ stipulation was fresh. The pacing was a lot faster than their previous bouts and the stiff shots looked brutal, sometimes to the point where I wondered if someone really got hurt. There were some awkward and sloppy moments, but it got my blood pumping and I enjoyed myself. A good way to start the show, although the crowd is already trolling by passionately booing the babyfaces and cheering the heels.

UNITED STATES CHAMPIONSHIP: Kalisto Vs Rusev– I was going to rant about how hulu cut out the majority of this feud from RAW, only showing us Rusev becoming #1 contender and their final clash before the PPV (RAW- 5/16/2016), but then I realized that this storyline has only taken place over the course of 3 weeks, so it was merely underdeveloped. Kalisto could’ve been a compelling Champion, but WWE had absolutely no idea what to do with him once he won the belt and Rusev has been used as talent enhancement throughout 2016…so of course he is going to emerge as the victor, even though Kalisto has been one of the few who have been booked relatively strongly…’Kalisto Vs Rusev‘ is obviously a cooldown match, so they aim for a more story driven flow, but it never seemed like it connected- with me or the crowd. Their styles didn’t work very well together, even though you’d think Kalisto’s athleticism would mesh well with Rusev’s powerhouse abilities. Not horrible, but not particularly good either. At least it didn’t take place on a f@cking kick-off show…

TAG TEAM CHAMPIONSHIP: The New Day Vs Vaudevillains– I have a feeling that Enzo and Cass were supposed to be here instead of the Vaudevillains, but Enzo getting injured at “Payback” forced re-writes. Nevertheless, this might be better in the long run as the story has put some decent heat on the Vaudevillains, who initially were met with apathy (on the Main Roster). While this isn’t the New Days most compelling feud, I thought it was handled adequately and seamlessly balanced comedy and intensity, allowing me to take the #1 contenders seriously, while being amused at the same time. The match itself was very underwhelming though and I’m surprised that the New Day cheated to retain the Titles, even though they’re supposed to be babyfaces. The pacing, spots, maneuvers, use of psychology- all fine, but nothing stood out as exceptional or memorable.

INTERCONTINENTAL CHAMPIONSHIP: The Miz Vs Sami Zayn Vs Cesaro Vs Kevin Owens– I’ve enjoyed the majority of this storyline, with the only imperfection being that it seems to be surrounding Kevin Owens instead of the Miz, so the belt is on the wrong villain. Nevertheless, I thought all of these personalities have been balanced effectively and appreciated the booking leading into this bout. I even liked when Ryder was given the opportunity to replace Owens in the match (if he defeated him in a 1-on-1 bout), as it gave the storyline a little bit more depth. The match started off surprisingly slow, but built up perfectly into the bundle of excitement and intensity that we would expect from these four performers. I loved the spots, the near finishes and everyone had plenty of time to shine. It was awesome, but the ending felt weirdly anti-climactic and I disagree with the Miz retaining the belt. He has been a supporting player in his own Championship defense, so the victor should’ve either been Owens or Zayn (since they are the ‘main characers’). Still, very fun match.

Chris Jericho Vs Ambrose– This feud lost a lot of steam since “Payback“, as it seems like the stakes became a lot…sillier? We’re supposed to care because Jericho broke a…plant? They aren’t even fighting for the fates of their respective ‘segments’. Throughout the majority of the match, I was kind of bored because it was more corny than exciting. I did occasionally laugh, especially when Ambrose wielded his nunchaku, but usually I was groaning. I can appreciate cheese, but this match seemed too long for it and I think they were aiming more for gravitas than comedy. But admittedly, the ending won me over with how they used the weapons. It wasn’t just that thumb tacks and barbed wired two-by-fours were utilized, but that they masterfully built up the suspense by making us wait, which made their eventual use that much more satisfying. So I’d probably describe this match as ‘uneven’, as the comedic first half didn’t mesh well with the violent second half and it probably should’ve been a little shorter.

WOMEN’S CHAMPIONSHIP: Charlotte Vs Natalya– Even though I’m still annoyed that the newly redefined Women’s Championship seems to be based around men, I do appreciate that they’ve built this up into an important feud and Championship. I’ve even enjoyed a lot of this storyline and thought it was satisfying seeing Natalya get the best of Charlotte, while Charlotte was smug enough to be a thoroughly despicable heel. But the match wasn’t very good, somehow managing to form an alliance between ‘short’ and ‘boring’. The ending was also stupid and I think it’s too early for Dana Brooke to get promoted to the Main Roster. It’s odd that this was a cooldown match, as it seemed like WWE was really promoting this one, even moreso than most Women’s feuds. Did Jericho and Ambrose accidentally go beyond their allotted time?

WORLD HEAVYWEIGHT CHAMPIONSHIP: Roman Reigns Vs AJ Styles– While I thought the First Chapter of their feud was more compelling, I don’t really have any complaints about the development of this match…WHICH IS AWESOME! As good as the Intercontinental Championship defense was, the main event had me chewing my nails in anticipation. We all knew that Styles would lose going into this, but they told such a compelling story within the ring that…I actually believed Styles could win. The timing, psychology, spots, pacing and intensity gripped me so firmly that I became a full fledged mark. Once again, I didn’t take any notes during the match because I was too invested. Styles and Reigns have such perfect chemistry that I was somewhat disappointed when Seth Rollins made his return, as that meant that we wouldn’t get a third round…Oh, who am I kidding? Welcome back, Seth! We missed you! Maybe we can get a triple threat for the next PPV, before moving onto a ‘Rollins/Reigns’ program? If I must be a critic though, I thought the Usos should not have arrived to save the day, as it negated their loss to the Bullet Club. But otherwise, this was an exceptional bout which arguably redeemed the rest of the show.

Overall: “Extreme Rules (2016)” didn’t feel…extreme, even though it certainly had its moments. I found the majority of the stipulations to either be restrictive or wasted, the results to be safe and the overall impact to be mild. Yet I also thought the show was surprisingly evenly paced, even though individual matches felt choppy in that regard. You might think that this is a strange claim, as I singled out two matches as ‘boring’, but the overall event never really lost my attention. Looking back, I thought three of the matches were disappointing, albeit in a mediocre kind of way. I didn’t care for ‘Rusev Vs Kalisto‘, ‘Baron Corbin Vs Ziggler’ and especially ‘Charlotte Vs Natalya‘, but I was also enthusiastically thrilled with three of the matches. ‘Miz Vs Owens Vs Zayn Vs Cesaro‘, ‘Usos Vs Bullet Club‘ and especially ‘Roman Reigns Vs Aj Styles‘ were really good! ‘New Day Vs Vaudevillains‘ found a middle ground within my emotions, while ‘Jericho Vs Ambrose‘ brought out both positive and negative emotions from me. So “Extreme Rules” was uneven, maybe a little soft, but easy to watch.