Plot: Four strangers find themselves alone in the world when everyone disappears mysteriously in the blink of an eye. Is it the rapture? Is it aliens? It’s actually the darkness, which has come to life to consume humanity. They must survive by using independent sources of light, but that’s running out, so they bad together in an attempt to flee the city.

The darkness has always been a villain within the horror genre, as it’s usually the asshole who hides the presence of serial killers, demons, poltergeists, aliens and all sorts of various creatures of the night. When darkness falls, you can expect something scary to happen, unless you’re watching actually “Darkness Falls”. So it’s natural that some filmmaker would make the darkness a monster in of itself, which is a pretty creative and original idea despite how obvious it sounds. I of course refer to “Darkness”…Oh wait, nobody remembers that movie, so let’s pretend that “Vanishing on 7th Street” is the one with the original concept. Who would be the filmmaker to explore this subject? Brad Anderson….oh boy…Brad Anderson has achieved quite a reputation with both professional and amateur critics, although I feel he’s overrated. I did adore “Session 9”, but outside of Christian Bale’s willingness to abuse of his body, “The Machinist” offered nothing memorable. “Transsiberian” still pisses me off because it was boring despite being my kind of movie and “The Call”…wait, shit, he did “The Call”? It was entertaining (albeit kinda stupid), I guess, but I suspect his input was limited…It lacks the artistic finesse of his other films (for better or worse). Yet even if I don’t care for the majority of his work, I will concede that the man has talent for evoking the right kind of mood. My issues were always with the scripts, not how he executed said scripts. “The Vanishing on 7th Street” was released amidst many delays, eventually being dumped straight to DVD due to the mostly negative reception. Indeed, this is a very flawed film and its attempts to convince you that it’s art can rub the viewer in the wrong way. “Vanishing on 7th Street” is a bizarre marriage of conventional horror and existential drama, but the problem is that its attempts to be one often sabotage the other. Yet in spite of this…I actually liked it and think it deserves a better reputation.

“Vanishing on 7th Street” wastes no time getting started, having the darkness consume everyone within the first five minutes. The films best scenes are when its protagonists explore the empty city. The sense of isolation and dread is heavy, with the plane bit being especially chilling. As the movie goes along, it never becomes any less chilling. I really thought the ‘darkness’ effects were pretty cool and its strange noises were unsettling. Anderson has a lot of fun using shadowy figures in the background and I loved the wide shots. You see characters hiding in a source of light, while everything else is covered with nothing but black. Anderson puts a lot of detail into framing ‘scary’ shots, such as when darkness drapes over religious imagery. If you just broke the movie down into stills, it would probably be heralded as a classic. It’s just too bad that one must consider pesky little things like narrative when determining the quality of a film. There are also plenty of intense situations, usually involving the characters trying to outsmart the darkness and keep the lights going, except it turns out the darkness is also trying to outsmart them. The problem is…it gets old after a while. You begin to feel like you’re re-watching the same scenes over and over again. The script also has its fair share of redundancy, such as introducing half of its cast by having them threaten each-other with a gun only to misfire. “Vanishing on 7th Street” isn’t very long, but I did often feel like there wasn’t even enough material to fill its 90 minute running time 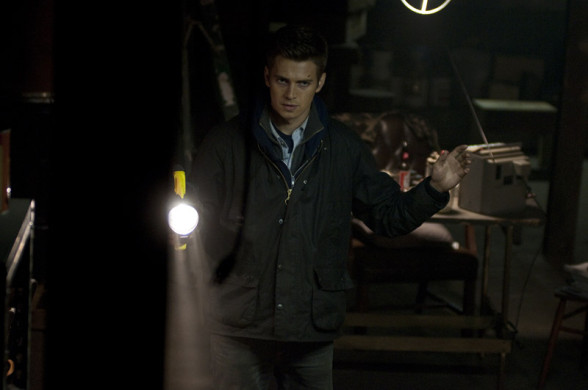 The characters are also a mixed bag. I didn’t like how they would often becoming raging morons in order to advance the story. I primarily refer to how even though the characters know that the darkness is crafty enough to trick them, they often fall for the dumbest shit, so they can die without problem. I HATE moments where the darkness pretends to be a loved one in order to lure them away from safety. They’re also isn’t much to any of their characterizations. Thandie Newton is motherly, Hayden Christensen is more practical than heroic, but he always changes his mind, the kid wants his Mom and John Leguizamo is a bit of a nerd. Yet they work because the actors portraying them just did that good of a job. Thandie Newton and John Leguizamo have proven themselves before and they don’t slum it here, but Hayden Christensen really shocked me. I’m not a fan or a detractor of his, but he represents one thing I liked about the cast: Their portrayal of fear. They all look like they haven’t slept in days and they seem genuinely afraid, even if they don’t always acknowledge it. There is a feeling of a slowly creeping madness in each of their performances, which benefits the atmosphere. Freak outs usually annoy me, but I bought it every time characters would clash in “The Vanishing on 7th Street“.

The script is very vague when it comes to what ‘the darkness’ is (God? Aliens?) and we never get any concrete answers. It’s speculated that it ties into ‘The Lost Colony’ story, although I did find it amusing how the character twists some facts (Croatoan- It’s an island. People know that). Many have expressed anger in regards to the ambiguity, but I didn’t mind it. How would something like this be explained without some major asspull? Yet I will admit that some events required answers, like the whole ‘pool table’ bit. That was unforgivably manipulative, confusing and stupid. I don’t want to spoil anything, but certain loose ends do eventually start to form plot holes. I’m all for ambiguity, but I need to feel like the writer at least has a clue as to what’s going on. Many have complained about the ending too, but while I agree it was ‘meh’, I thought it provided a hint to the darkness’s motives (which is suggested before). My biggest complaint regarding the script is its attempts to be deep. I did like the existentialist theme at first (“I exist because I will myself to exist” was a great line), but overtime, it becomes as redundant as everything else. Whenever someone confronts the darkness, they will yell “I exist!”. It’s contrived how everyone says the same thing, but re-using a simple line like that over and over again is not considered very artistic. I like the idea of characters struggling to justify their own existence, which might be important to them, but is irrelevant to the universe. But the execution was somewhat sloppy.

In the end, general audiences found “Vanishing on 7th Street” too talky and ponderous for its own good. They want to see creepy spectres terrorize the characters, not the characters rambling about their lives. The high brow crowds, who I personally feel are the most gullible, were disappointed that all of its substance amounted to characters shouting “I exist” while in peril. They probably desired more character development and fewer sequences of the darkness attacking. In essence, nobody got that they wanted…except me. Even though it’s nowhere near as deep as it thinks it is, it has enough moments which helped make it MORE than just another horror film. It has some ambitious, thematic ideas which managed to stimulate my brain (somewhat). Plus, even though it relies on the same scare tactics too often, I thought it was usually pretty spooky. I cared for the characters enough to be invested and I think I prefer horror movies with small doses of art over pure horror/arthouse hybrids. “Vanishing on 7th Street” isn’t as artsy as “Kiss of the Damned” or even “The Lords of Salem“, which is only good or bad based on each individual viewer. But those films contained enough of that to at least catch the attention of those crowds. “Vanishing on 7th Street” also doesn’t have the quick pacing or the constant jump scares of more conventional horror flicks, meaning it’s not as accessible as those films are. But even if it doesn’t succeed in winning over either crowd, I think it’s attempts to combine both were at least interesting to behold. I can’t deny its weaknesses, but it is a film which fits my tastes more than something like “The Machinist” did.

Overall: You’ll either dislike “Vanishing on 7th Street” for its failures, or appreciate it based on its strengths. Yet even the fans can’t deny its flaws. I think it’s worth watching if you know what you’re getting into, but don’t have high expectations- regardless of what you feel about the director.