(Written and Directed by Greydon Clark) 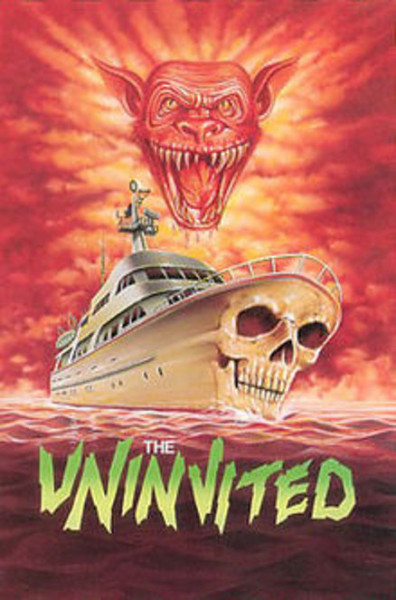 Plot: A mutated cat finds itself aboard a yacht, owned by some shady ‘businessman’ (Alex Cord) and discovers a taste for human flesh.

What I love about “Uninvited” is how sincere it is about itself…usually. I’m convinced that the writer/director couldn’t make up his mind as to whether he wanted to make a sleazy splatterfest, an intentionally bad campfest or a claustrophobic thriller…fest…Let’s begin with our murderous feline. It looks like a normal, adorable cat. But you see, a murderous beast comes out of its mouth. Sometimes the creature looks more like a rat, other times like a cat, but it somehow always manages to resemble a puppet. The continuity for this thing is all over the place. Sometimes it’s tiny, other times it’s about the same size as its host (the real cat) and it will occasionally even be bigger. The cat has the tendency to meow when it’s mouth isn’t moving and if it’s saliva gets into your bloodstream, you will be poisoned in the most over-the-top manner. Its behavior is inconsistent. It’s introduced as sort of an anti-hero, only killing in self-defense or in the defense of people who were kind to it. So when its first victims turn out to be assholes, we sort of root for it. But then, for no real reason, it starts preying upon the good guys too. I think we were supposed to believe that since the yacht was stranded and everyone was running out of food and water, the cat was also suffering from starvation. It needs to eat too, after all. It’s vague and handled very poorly, but reread this paragraph and then read it again. How is this not cinematic gold? Okay, sure, it looks like a phony puppet that emerges from an even phonier puppet, but its absurd design is pretty memorable. I will admit that occasionally, I was even startled when it would show up. I mean, usually I would just laugh at it, but sometimes I would feel a minor jolt. Although maybe I was jumping because of how ridiculous it looked…I dunno, but I was jumping…sort of. 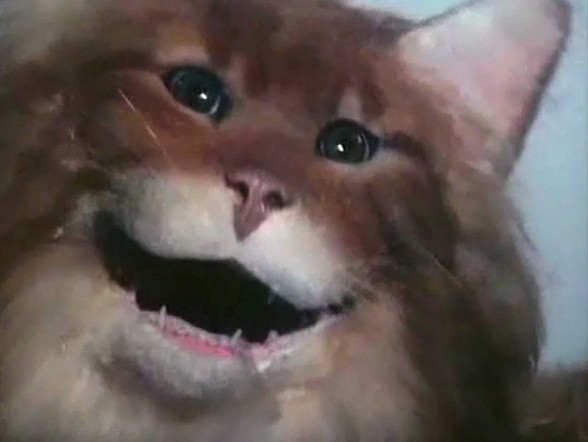 But is the rest of the movie ‘lol’ inducing? Hell yeah! Even the opening credits managed to amuse me. The first title card reads: “Amazing Movies Presents“…Well, “Uninvited” is pretty amazing, even if it’s for a completely different reason than what that studio/distributor was aiming for. It’s followed by ‘Starring George Kennedy’, even though George Kennedy is a supporting character who’s killed off by the half way point. Then we see the laboratory, which looks like a local vet. Then people start talking and we bathe in the glow of the bad acting. Even the good actors, such as George Kennedy and Clu Gulager are delivering pretty weak performances. At least Kennedy is playing it straight though, which is pretty funny in itself- even if he looks embarrassed. Clu Gulager appears to be wasted in every scene he’s in and he hams it up like mad crazy. I didn’t care for him as much, because he’s portrayed as a goofball and whenever “Uninvited” tries to actually be funny, it doesn’t work. The comedy rarely annoyed me, but I never laughed with it- only at it. Some stand out moments in the bad acting department include Kennedy kicking some poor sap while he’s down, except Kennedy pulled back too early so the guy seems like he’s being struck by air. Every time anyone interacts with the creature, their movements look so silly that you will feel embarrassed for everyone, but then lose yourself in the hilarity of the moment. No joke can ever be as side splitting as watching one of these actors trying to fight off a monster puppet. The nasty violence- and this is fairly gruesome for a PG-13 rating- is supposed to be unsettling, but you’ll lose your lunch for a totally different reason than what was intended. But the best has yet to come…

Ironically, my favorite part of the movie is likely your least favorite part. After two characters have been killed and the creature’s presence becomes known to the cast, the film slows down. Characters talk…and talk…and talk…and have PG-13 sex. At first, I thought the film had used up the majority of its budget, so was pussying out (no pun intended) in the action/horror department. At first glance, it just seems like they’re padding the running time. But then I realized that the writer/director- Greydon Clark, a true pioneer in arthouse cinema- was attempting to make a claustrophobic, psychological thriller. It was no longer about the creature attacking people. It was about the characters reactions to their predicament. It was about survival. The boat is stranded, food and water is becoming scarce, their radio is busted, a criminal is on-board and a mutated puppet is trying to eat them while also contaminating their remaining food. We witness these characters break down under pressure, revealing their true colors. Heroes are born out of the weaker members, while stronger characters become useless wrecks. Some become swayed by greed, others will realize what is important. As I mentioned before, I think the creature only attacked the protagonists out of desperation. So I could argue that the cat was in the same boat as them…Er, metaphorically…and literally…I promise that pun was unintended. This actually could’ve made for a legitimately interesting movie, one that transcends its genre. The problem? The writer/director and the majority of the cast can’t sell any of it. In terms of writing, characters merely become contrived badasses or annoying loads. In terms of directing, he can’t make the cat-creature scary because it’s so goofy. In terms of acting, everyone is too delightfully awful. But the attempt at something ‘deep’ was HILARIOUS. 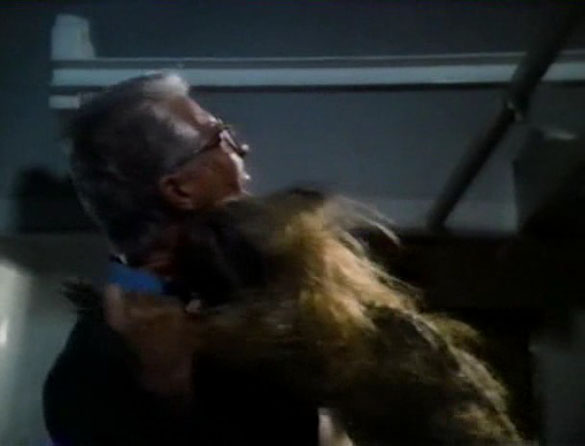 I’m pretty sure the director realized how stupid his movie was by the time he shot the ending, because it becomes so silly that it makes the rest of the feature seem solemn. The ship sinks- making all of those scenes where they try to fix it pointless- and magically turns into a toy boat. It’s not quite as brilliant as the toy shark exploding from “Jaws: The Revenge“, but that was a masterpiece in awful movie making, so it’s an unfair comparison. The characters use a lifeboat to escape, but the cat isn’t finished with them yet. Watching the cat climb aboard and attack one of the survivors, who holds it inches from their face, is a true delight. It’s like one of those slapstick comedies, where the actors will comically fight what is obviously a puppet, but will throw themselves into it with such gusto that you can’t help but smile anyway. The cat gets thrown overboard, but the character announces that it’s not over yet as it attacks in the same way. It really does look like they just re-used the same footage twice. It makes everything I had previously witnessed in “Uninvited” look classy and serious in comparison. The director had to know how goofy it looked and it’s one of the few scenes where I felt he was making an intentionally bad flick. If this is the case, it’s the only time where I laughed with the movie instead of at it. In fact, I’d sum up the ending as: It’s parodying the first two acts. I’m only speculating, of course, but this is what I felt.

Now, make no mistake. “Uninvited” is bad. It’s really bad. I can’t even bring up all the plot holes (no one noticed the bullet holes that would sink the boat?), continuity errors (different trucks) and lapses of logic (too many to count) without feeling like I’m nitpicking. I pointed out the bad parts that effected me the most, for better or worse. Yet it’s charming in its badness, sort of like “Troll 2“. Whenever the film would screw up, which was every scene, I would snicker instead of frown. I was never bored for this reason. Had the director been more competent, I don’t think it would’ve worked, as such a premise DESERVES a writer/director like Greydon Clark. Yet I want to give Clark some legit credit for actually putting effort into the screenplay. The dialogue blows, but at least it’s kind of colorful and strange. His attempt to make something more than just a monster movie kinda appealed to me in a strange sort of way. “Uninvited” has a pretty original concept and its execution is also kind of original. I appreciated how there wasn’t a set protagonist until half of the cast died and some of the deaths did surprise me. I respect effort about as much as I respect talent and while Greydon Clark might lack talent as a writer or director, at least he tried and had some creative ideas. That doesn’t stop “Uninvited” from being bad, but it’s enjoyably bad.

Nudity: None, although it teases us A LOT.

Overall: “Uninvited” fits my definition of so bad-it’s good. If that interests you, give it a look.