(Written by Kuang Ni…also as usual) 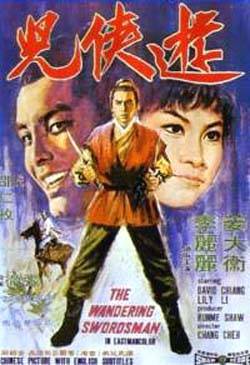 Plot: The titular Wandering Swordsman (David Chiang) steals from criminals to give to the poor, but finds himself pulled into a deadly plot involving a legendary gang of thieves. Also known as “You xia er“.

“The Wandering Swordsman” is more evidence for my theory that Cheh Chang has directed every kung fu movie ever made…and before you start countering with ‘so called’ facts such as listing other noted directors in the genre, let me respond with: Shut up. The funny thing is I don’t even mean to continue reviewing the massive body of work from either Cheh Chang or screen-writer Kuang Ni, but somehow their movies find themselves in my DVD player before I’m even aware of the connection. At least I can’t say I’ve covered many David Chiang flicks, probably because I haven’t seen many David Chiang flicks…for some reason. From what I gather, he was built up to be the successor of Jimmy Wang Yu (“The One-Armed Swordsman“), although this ended up being temporary because Bruce Lee and Jackie Chan would arrive and mold the industry in their image(s). Suddenly he- and many others- looked obsolete in comparison, although Chiang was smart enough to adapt to the changing times and was always able to find work. “The Wandering Swordsman” is a good movie that might even be great, reminding me that before choreography became the focus of the genre, Hong Kong productions could be as sophisticated as anyone else. The writing, direction, cinematography, acting, editing and productions values are pretty impressive, although the choreography is pretty unimpressive in retrospect. Do you want a good movie with martial arts? Or a good martial arts movie? “The Wandering Swordsman” is definitely the former.

Kuang Ni’s writing on this script is quite exceptional, although we must accept that coincidences drive the bulk of the story. I was a little vague in my plot description primarily because I didn’t want to spoil anything. Part of my enjoyment came from going into this story blind, only being aware of the ‘Chinese Robin Hood’ scenario and not anticipating the twists- which are spoiled in most plot descriptions. The narrative had a nice flow, doing a good job at establishing the characters, their motivations, strengths, flaws and how they tie into this arc. The Wandering Swordsman (according to the subtitles, that is his name) himself is charming, funny and a little bit of a jerk despite being benevolent, while also being portrayed as intelligent…but somewhat gullible. He’s a well rounded character brought to life by the highly charismatic David Chiang, who was perfectly cast. There is a quasi-romance between him and Chiang Ning (Lily Li), but it works because the writing never demands that we accept it as anything too deep. The swordsman’s’ feelings are ambiguous, but his silly flirting has caused her to develop a crush on him. They had nice chemistry and their interactions were adorable, but at no point did I think the film was forcing ‘true love’ down our throats- and I respect that. Chiang Ning is also tougher than most love interests, even managing to get herself out of a nasty situation without requiring help. I also really enjoyed the presence of Fail-Safe Kung (Pei-Shan Chang), who is incredibly cool despite being the antagonist. Much like the Wandering Swordsman, he has a natural charm that makes it easy to like him even though he’s screwing the protagonists over. His quirky mini-boss squad also all managed to stand out despite limited screen-time, but all of these pieces were utilized so efficiently that I never thought anyone or anything was undeveloped. “The Wandering Swordsman” had a good story that was told well.

“The Wandering Swordsman” was one of Cheh Chang’s higher quality efforts as director, although he also appears to have had more money to work with. There are more lavish sets, extras and startling special effects that hold up surprisingly well. The cinematography boasts nice scenery and the director’s framing provides memorable visuals. The music tends to be melodramatic, especially with those zingers, but I thought that was pretty endearing in a corny kind of way. Cheh Chang seems to be borrowing from old westerns and Zatoichi flicks for his style, in contrast to his usual competent workmanlike delivery, but the visuals were aesthetically appealing. The problem is…”The Wandering Swordsman” is prone to falling in love with itself, knowing every time when there is an attractive shot, because the camera lingers for absolutely no reason except to brag. I usually wouldn’t complain- as these are really good shots- but this harmed the pacing, as it felt more like padding than substance. I occasionally grew impatient, especially near the end, because “The Wandering Swordsman” REALLY did not want to end. Just when you expect the end credits to roll, story continues! One sequence looks kind of cool thanks to the slow motion, but it threw me off because I wasn’t sure if this was a flashback or if a character had survived an apparently mortal wound, but apparently it was all in another characters mind… On another note, the tone was also handled masterfully, with its descent into tragedy never feeling out-of-place when compared to the earlier comedy. This is because the humor comes from the protagonists personality instead of general hijinks. This is actually quite a rare accomplishment for Hong Kong cinema, which usually prefers the mating of broad comedy and mean spirited tragedy. During the early 1970’s, kung fu flicks tended to be bleaker, so the humor provided a nice contrast while the annoying slapstick had yet to become an epidemic for the industry…at least from a westerners perspective.

The hand-to-hand combat on display is rather shitty, although maybe I am being a bit harsh. If anything, Chiang’s athleticism and Cheh Chang’s visual panache do deserve praise, but it was too obvious that none of the hits were connecting. It often didn’t even look like they were coming even close! Yet this isn’t a big deal because “The Wandering Swordsman” focuses primarily on swordplay, which is decent. Chiang handles himself well and the filmmakers add enough gimmicks to cover up his limited abilities as a martial arts performer, such as wire works, trampolines and good sound effects. There are enough interesting ideas within the fights to keep them compelling and I thought the use of sets even made them exciting. The majority of the battles are one-against-many, but there are enough exceptions and the swordplay choreography was always passable. During 1970, this probably would’ve been considered cutting edge, yet as of 2015 the sword fighting starts to get a little monotonous. Maybe the techniques just needed more variety, but I did occasionally drift off during some of the battles. There is quite a bit of action, so I have to blame the quality- even though it’s still okay. It is strange though that “The Wandering Swordsman” satisfied me on every level EXCEPT in the one area I’d expect it to excel in…But the action isn’t bad, while everything else is pretty good!

Violence: Rated R. It has a few very grisly moments.

Overall: “The Wandering Swordsman” probably has a better chance of pleasing casual fans or independent viewers than it will hardcore enthusiasts, but it’s still a good movie that has decent fight sequences.