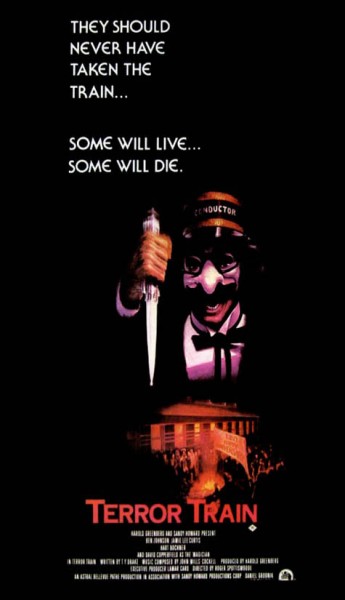 Plot: A bunch of college students are having a costume party on a moving train, but the night of fun turns into terror when a vengeful killer starts targeting the amorous teens and adopting their disguises to mask his or her identity. Will they survive?

I think the filmmakers of “Terror Train” should be ashamed for using their time machine to go into the future and steal from classic slashers such as “Valentine“. haha, okay, okay, I’m obviously joking…After all, “Valentine” sucked.”Terror Train” is often dismissed as another slasher created in the wake of “Halloween” and “Friday the 13th“, although I’ve heard differing opinions as to the quality. Some think it’s one of the better examples of its genre, others find it to be mediocre. Despite herding all of the cliches formed by its predecessors together so that there can be a story, it also did arguably help form some of the conventions that would be exploited by later films. The big gimmick was that it took place aboard the train and instead of wearing a mask, the killer wore many different masks based on whom he just killed. Admittedly this is a pretty short sighted idea as there is no way a sequel could ever exist and I don’t know about you guys…but a Groucho Marx mask is not very threatening. I mean, the director crafted a magnificent stalk sequence with creepy music and edgy suspense, but he might as well have not bothered when we’re supposed to be scared of such a goofy looking killer. But despite the questionable ideas backing this slasher, at least it had some inventive ideas…Hell, the story is even pretty ambitious at times. “Terror Train” might be another slasher of the early 80’s, but it’s not JUST another slasher of the early 80’s. It has some good twists, a strong cast and favors suspense over gore. It’s not likely going to end up on anyone’s top 10 favorite slashers list thanks to some migraine inducing flaws, but I liked it.

I’m a  pretty big fan of movies taking place on trains, although I’ve never really been able to explain why I think it’s appealing. “Unstoppable“, “The Horror Express” “Murder on the Orient Express“, “Night Train” and “Last Passenger” are awesome flicks made awesomer thanks to the location. “Terror Train” doesn’t always utilize the set to its maximum potential, but it did enough to give this slasher some flavor. Part of my partiality towards trains in the cinema is that they can be very claustrophobic and the lighting and setting in “Terror Train” combined to create a gloomy, oppressive atmosphere. The music was very intense and the cinematographer captured some gorgeous-but-haunting shots. The locomotive itself looked very menacing, especially when stationary, thanks to the excellent direction and camerawork. That’s another reason I adore the location, as it provides multiple layers of danger: The train can be in peril on the outside, while the characters face a more personal threat on the inside. Unfortunately, “Terror Train” could’ve gone further with this angle. There is one intense sequence where the characters realize that no one is steering and the locomotive is moving unnaturally fast, but it ends a bit too quickly for it to leave a lasting impression. There are times when I forgot they were on a train at all and I think it would’ve been more chilling if there was a smaller cast. There shouldn’t have been more than a dozen people aboard, but instead we got a train full of extras…who aren’t even all slaughtered. This also means less stalks and attacks, as the killer’s mobility is limited when there are so many witnesses. But as I said, what we got was enough. At the absolute least, I’ll remember “Terror Train” for the…well, train. 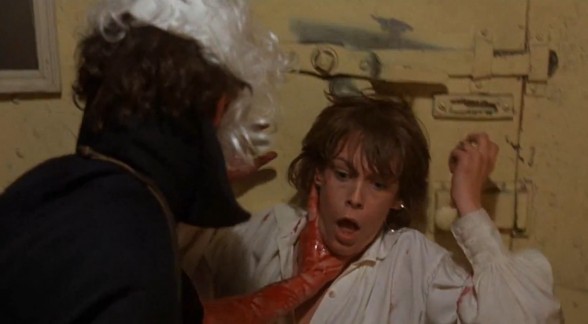 The director did a really solid job at generating suspense. While there is violence, he seems to be more influenced by “Halloween” than “Friday the 13th“, although I’d say “Prom Night” is a better comparison in regards to the amount of gore. There are some grotesque moments, but this is not one of the bloodier entries within the genre. But the build up to the kills made me chew on my nails in anticipation and there are enough intense scenarios to keep you nervous. The finale was pretty damn riveting, but I have to say the best scene was when Doc (Hart Bochner) finds himself potentially being hunted. I thought that was outright scary, a rarity even among the better slashers. The acting is REALLY good and “Terror Train” provides the performers plenty of room to emote. Bochner, for example gets to be the obnoxious jerk, the charming jokster, the sociopath prankster, the mourning friend, the paranoid asshole and the terrified victim- nailing every emotion he has to go through. But the rest of the cast were surprisingly natural and Jamie Lee Curtis (Alana) reminds us why she went beyond being a mere scream queen. She’s a normal girl, but not the demure virgin she popularized in “Halloween” and her charisma never wavers. Ben Johnson (Carne) is your resident veteran who used to be a respectable star, but whose career has been reduced to giving lesser movies more credibility. While I’m sure he thought this project was beneath him- because it was- I’m glad he was around as he did class up the joint. He’s the only consistently likable character too. Another benefit of the train location is it provides the opportunity for many colorful characters to come together and be the focus, because there isn’t much room for spectacle. Unfortunately…the characters in “Terror Trains” aren’t very sympathetic. Carne aside, everyone seems too determined to cheat on their boyfriends or girlfriends to be endearing- although even Doc gets some humanizing moments. You might want to punch them all, but they weren’t necessarily boring, probably thanks to the cast. The dialogue ranges from colorful to lazy, the low point being when Carne explains how there are no radios- very contrived exposition. Otherwise, it was fine.

And “Terror Train” was fine too. If you dislike slashers, then you’re probably going to dislike this for the same reasons you dislike them all. But whenever I return to the 80’s and explore their slasher vault, I’m always taken aback by how the times have changed. These days, if you see a slasher worth watching- and very few are, the emphasis will be on the splatter…or maybe the comedy. Everything is so over-the-top that it’s hard to take seriously, even though I have found plenty of entertainment watching fictional serial killers literally rip heads off. During the 90’s, slashers weren’t designed to scare you or gross you out, instead pushing this (obnoxious) self referential satire which won over a lot of detractors. But the 80’s had a special kind of atmosphere that has become extinct over the years. The lighting, cinematography and slow burn suspense had a distinct look and feel that you just don’t experience anymore. “Friday the 13th“, “The Burning“, “The Prowler” and “Terror Train” all specialized in building up to the nasty kills, making them more effective and memorable, whereas modern slashers lack the patience. I’m partial to the kind of movie that “Terror Train” is and as a slasher fanboy, it satisfied my appetite. Plus, the big reveal managed to surprise me! I’m not sure whether I should be happy or sad for not guessing who the killer was…

Violence: Rated R. There are some stand-out moments of violence, but it’s not one of the gorier slashers out there.

Nudity: There is some breasts and lots of sexuality in general.

Overall: “Terror Train” is a solid slasher that should please its target audience.