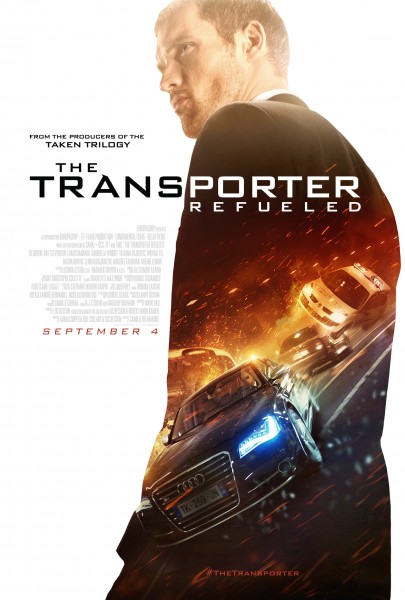 Plot: Frank Martin (now played by Ed Skrein) is a highly skilled transporter who usually takes jobs from shady people, but he’s double crossed by four mysterious women who have kidnapped his Father (Ray Stevenson). Now he has to do what they tell him, although this becomes less complicated when he begins to sympathize with them. Also known as “The Transporter 4“.

Every viewer has different expectations going into every movie. Some will only appreciate something if it has a strong screen-play and others are perfectly content with just sitting back and enjoying the show- no matter how dumb it is. This is why Michael Bay is simultaneously hated and popular, because he understands his audience and knows how to satisfy those who like shallow entertainment. Personally, I prefer judging a movie based on ‘what it wants to be’ and ‘my relationship with what it wants to be’. In the case of action flicks, I’m willing to accept a substance-less, thinly written, hole ridden story as long as the spectacle on display distracts me from its shortcomings. Because I like that genre. I recently reviewed “Kung Fu Killer” and gave it a positive rating, despite calling it “bad”, because I was paying more attention to the awesome fight scenes. Everything else was just back-ground noise. I also recently reviewed “Terminator: Genisys“, where the action was not cool enough to keep my attention away from the abysmal screen-play, so I focused more on what I despised and gave it a negative rating. Other times, both sides will completely cancel each-other out, leaving me unsatisfied but indifferent.  I bring all of this up because I knew that “The Transporter Refueled” was going to be dumb, perhaps even retarded, but I was willing to be seduced if the action was thrilling. Unfortunately, the action failed to wow me and I found myself zeroing in on the flaws- which this ‘reboot’ offers in abundance.

Let’s go ahead and start with the aforementioned action, because that is the selling point for “Transporter Refueled“. The car chases are pretty good, utilizing impressive stunt work without resorting to excessive CGI. I thought the camerawork was steady and the editing was of these scenes was fluid and coherent- the director is primarily known as an editor. I also enjoyed some of the absurd scenarios, even if I felt they could’ve been taken even farther. This entry might not enjoy the star power of Statham, but the production values were still solid. Nothing about any of this was amazing, but I could’ve enjoyed “Transporter Refueled” if the script wasn’t AS mentally handicapped and if the hand-to-hand fight sequences weren’t so embarrassing. From the opening fight, I could tell that something was wrong. The sound effects seemed muffled and the ‘hits’ looked way too soft. Nobody really seemed like they were really trying to hurt each-other and this continued throughout the rest of the film. The most interesting brawl is when our hero finds himself in a confined area, surrounding by enemies and he has to incorporate opened drawers into his style in order to hold them off. It’s supposed to look really cool, but “phony” was the first word to enter my mind. I’ve seen Jackie Chan pull off similar gimmicks, but it…was…just…silly. I thought it was awfully nice of these villains to place their feet in the perfect location for Frank to trap them in the shelves and hold this position long enough for Frank to do it to someone else before returning to them. The final confrontation between the hero and villain somehow managed to be the worst, primarily because all of my previous criticisms are still in effect, but their movements seem INCREDIBLY slow. I kept thinking that I was watching a rehearsal for this fight, not the final take. These problems with the hand-to-hand fighting siphoned away all of the intensity and excitement, so I was mostly uninterested in them. The balance between fist cuffs and car chases are about 50/50 and the badness of the former outweighed the benefits of the latter, so we’re already in shaky territory. And we haven’t even gotten to the horrible…everything else yet…

The transporter character is…ruined. When I first saw Ed Skrein in the trailer, my immediate response was: “He looks too pretty to be stepping into Jason Stathams shoes“. But I figured that there was a purpose behind his casting. I thought maybe I shouldn’t judge a book by its cover, because he might be awesome, but now I suspect that he was hired solely to draw in young girls. In his defense, he’s actually a solid actor with a lot of charm, who makes the best out of a failed role, but he lacks the charisma and presence of Statham. Even worse, the writing goes out of its way to belittle and emasculate the character. He’s constantly being put into positions of vulnerability, whether he’s being outsmarted or out-talked by the women, the villain or his Father. He never seems to be in control of the situation and even his rules are undermined by the fact that he apparently just wants the approval of his Daddy- who doesn’t act stern or hard-to-please, making the whole idea pointless. If Jason Statham was still in the role, maybe I could’ve been more accepting because that would add a new dimension to the character. In the previous movies, the Transporter himself was the smartest, toughest and most level headed character, but the fourth film would finally take him out of his comfort zone and humanize him. But this is a reboot, so all of that history is irrelevant, even if it’s possible that this takes place in the same continuity. We are seeing Skrein’s Frank Martin for the first time and…he just doesn’t seem that bad-ass. I can’t take him seriously as an action hero.

The other characters aren’t any better…and in fact, may even be worse because at least Skrein’s Frank Martin had a character, pussified as he was. Ray Stevenson (The Father) delivers the best performance and is one charming guy, but he never seems too concerned about the danger, while never coming across as an especially skilled bad-ass. He’s constantly being kidnapped, so his nonchalant attitude only takes away from the drama. Strangely, he has an implied romance with one of the girls, who gets wounded. While she is recovering, he has a threesome with two of the other girls…The f@ck?! The four women baffled me because they are glaringly interchangeable. I can’t pinpoint their names, personalities or even their appearances outside of one being Asian. Who’s the dumbass who decided to have them spend the majority of their screen-time wearing the same wigs and dresses? I understand why they’d do it during the initial Bank Robbery, but they wear them so much that I couldn’t tell any of them apart in the long run. One has a tryst with Frank Martin, another has feelings for his Father, the other two appear to be in a relationship together and they were all forced into Prostitution. Oh, and they’re hot. Clearly, these are the deepest and most profound of characterizations…Even the villain is rather generic. He’s a bad guy, but he does nothing that really gets the audience to despise him. He kills some other gangsters and deals in human trafficking, but that’s a little undermined by the revelation that the girls were sold by their parents. Shitty stuff, sure, but wouldn’t it be better if he abducted the girls and forced them into this lifestyle? As it is, the parents share too much of the blame! I kept expecting the antagonist to kill allies or underlings for failing him, but he never does and always acts reasonably polite. The only terse interaction was with an Inspector, who seems to passively aggressively suspect anyone he encounters. Mr. Villain is too bland to really despise and not shown to be exceptionally intelligent or dangerous, so we don’t fear him or eagerly await his death. We just don’t care.

The script is constantly going out of its way to make me laugh. 15 years later and the girls still look identical? One gets shot, but has no problem swimming underwater or strangling someone- after getting shot again? Does nobody care about collateral damage? We’re supposed to sympathize with Frank Martin for his values or the girls for trying to escape a shitty lifestyle while getting vengeance, but none of them react to all the injuries and probable deaths which likely occurred thanks to their actions! Worse, they have a smug dimeanor through a lot of it, so why should I want them to survive? The dialogue is bad because it’s either too on-the-nose with its exposition or it’s trying too hard to sound edgy and cool. This REALLY hurts a lot of the performances, as everyone delivers their lines in a growling voice that gets old quickly, because that apparently makes them bad-ass. Otherwise, the plot is mostly just…thin…It’s not like the previous entries were substantial in story, but they did a much better job at getting me to care for what was happening…even if just a little. “Transporter Refueled” was an incredibly stupid movie, but even worse, it was an incredibly underwhelming and sometimes laughably bad action flick. Yet at the same time, there’s nothing especially memorable about the badness, so it has already begun dissipating within my memory.

Note: The director had previously helmed “Brick Mansions“, the remake of “District B-13“. I was going to list it as an example of”Other times, both sides will completely cancel each-other out, leaving me unsatisfied but indifferent.“, but I decided no one would likely remember that movie. I also didn’t want to *snicker* spoil my feelings that early. “Brick Mansions“>”Transporter Refueled“. Think about that…