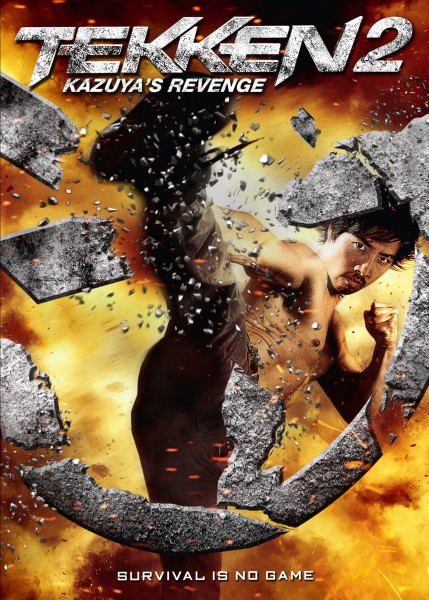 Plot: Kazuya (Kane Kosugi)…yeah, I know it’s supposed to be a big twist who he is but his name is in the God damned subtitle…wakes up with a severe case of amnesia and he’s promptly abducted by cultists who train assassins. He joins the group and walks around…a lot. Also known as “This Movie is Shit“.

I am currently slamming my head against the keyboard over and over again in a blind rage and through sheer coincidence, coherent sentences are being formed from it. I am a huge mark for the “Tekken” franchise, happily embracing it even through our differences. But I very much despised “Tekken (2010)“, the live action adaptation that us fans pined for to get made until it actually got made, causing us to pine for it to be unmade. Admittedly I only despised it as a fanboy, as I felt the filmmakers had to be intentionally going out of their way to piss us off by making the characters total opposites from their videogame counterparts. On its own, it’s a thoroughly mediocre, forgettable experience. “Tekken 2: Kazuya’s Revenge” almost makes me want to go back and give the 2010 movie a heartfelt apology, but I am hesitant to do so as it’s possible that the subtitle of “Kazuya’s Revenge” is breaking the fourth wall and “Tekken (2010)” was in fact unleashing this sequel upon us as punishment for disliking it. That might sound like a stupid explanation for the subtitle, but did Kazuya ever even get his revenge in this flick? It ends with him presumably going to get revenge…maybe…not according to the 2010 film…”Tekken 2: Kazuya’s Revenge” is technically a prequel, but it doesn’t even fit within the continuity of the first movie and somehow manages to be an even more unfaithful adaption of the video games. Even worse than that, it’s REALLY, REALLY boring…Within 30 minutes, you will be begging for sleep!

The beauty of this piece of shit is not only does it fail as an adaptation of the video games, but it doesn’t even work as a prequel to “Tekken (2010)“. Here are all the connections: There is a character named Kazuya and some minor characters named Heihachi and Bryan Fury- the latter two playing played by the original actors, but not bothering to look anything like the characters this time around. Oh yeah, there is a city called Tekken too, but it’s such an afterthought that I forgot…and neither the slums or city come close to resembling the setting from its predecessor. Don’t expect any sly references to the games, although Kazuya says something along the lines of: “He likes to play games, so lets make some games of our own“. I’m still debating whether that was intended to be a reference, but I have no idea how that fits in with the first movie. Is it karma that just as the first film created characters that were the total opposites of their video game incarnations, this prequel creates characters that were total opposites of their previous movie incarnations? Kazuya is a nice guy who doesn’t like to kill, protects a girl from being raped, seems to despise sex offenders and is actively opposed to his Father…when did he become the vicious, bloodthirsty rapist who wants Daddy’s approval? Heihachi was previously portrayed as a ruthless, but honorable man who was concerned with how cruel his son was, while frowning upon his hedonistic lifestyle. Here, he wants to bring out Kazuya’s evil side and makes out with a chick. Now there is a reason for all of these discrepancies: “Tekken 2” was not intended to be based around this franchise. It was originally conceived as an ‘original’ project called “Agent X“, about a man who wakes up with amnesia and is inducted into a clan of assassins. Somewhere along the line, they converted it into a sequel. Maybe this was done during the filming process or maybe it was done an hour before production began, but whoever is responsible for this decision…probably made a good business choice. After all, the lame dialogue, familiar storyline and bland characterizations don’t give me confidence that the original idea would’ve been any good. I’m only watching it for the “Tekken” name, but I wish more effort was put into the conversion process. “White Noise 2“, “Hellraiser 5“, “The Raid 2” and “Die Hard with a Vengeance” proved that it can be done if you put an adequate amount of time and effort into the re-writes. Unfortunately, nobody cared enough about this project to even try. 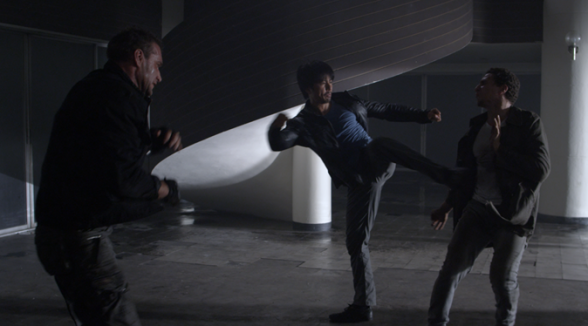 But this is a martial arts movie and as much as I can bitch about its many failures, I can tolerate everything if the action is fun. If “Tekken 2” has any redeeming qualities, it’s that the fight scenes aren’t bad. The movements seem a little slow compared to what most examples of the genre prefer to showcase, but I was okay with this as it allowed us to see more of the techniques. Kane Kosugi (Kazuya) does get to…Sho…(Get it?!) some pretty impressive skills, especially when it came to catching his victims in those armlocks. The best scene is definitely round 1 of his battle with Bryan Fury (Gary Daniels), which might even be worth watching if that footage pops up on youtube. I think “Tekken (2010)” had smoother choreography, but “Tekken 2” had steadier camerawork and the editing didn’t disrupt the flow of the fights AS MUCH. The sound effects were a bit overdone, but I only acknowledge that as a critic, as it didn’t take me out of the action. Unfortunately…the action might be fine, but we don’t get a lot of it. The first act probably contained the majority of the hand-to-hand combat, but the rest of the movie is more about the exciting awesomeness of Kazuya…walking…Sometimes, if the filmmakers really want to be riveting, he will…STARE AT BUILDINGS! BADASS! Then of course you have those EPIC money-shots of Kazuya walking AND staring. I have to presume that the director is trying to evoke the artistry of “Le Samourai” or “The Mechanic” with Charles Bronson, but the visuals lack depth and Kane Kosugi isn’t charismatic enough to just stand around and be compelling. I’m typing this as of 12/18/2014 and earlier in the day I watched “The Hobbit: The Battle of the Five Armies“, which was a two and a half hour long movie that felt a full hour shorter because it moved so fast. “Tekken 2: Kazuya’s Revenge” is an hour and a half long, but feels more like a full hour longer because it moved so slowly. This setting doesn’t make a lot of sense as some of the wide shots occasionally show a dystopian world, much like the first film, but usually the locations looked very…mundane. Considering this is supposed to take place in the future, the future looks suspiciously like the present. I won’t blame the flick for having a low budget, but maybe they shouldn’t have drawn so much attention to the inconsistent continuity of this setting.

The storyline ranges from bland to unfocused to outright confusing. For the most part, we’ve seen these kinds of plots done many times before in better movies. Guy is brought up to be an assassin, but starts to fall in love with a girl and wants out. So Kazuya rescues the girl from being sexually harassed and during a later encounter, she thanks him and offers him dinner. He gently refuses, but changes his mind and they share a sweet smile before cutting to said dinner. She’s asking him questions, but he seems more interested in eating. I laughed because at one point, he’s even ignoring her and has to ask her to repeat the question. Yet apparently we’re supposed to care for this shit and the next scene they have leads to sex. Meanwhile, his handler is another assassin named Rhonda (Kelly Wenham), who seems to be a better person than she lets on. There is a story-thread where she overhears the Minister (cult leader) agreeing to kill children, but it doesn’t go anywhere. Yet she turns on him after it’s revealed he had an undercover cop killed. She also apparently has a back-story with Bryan Fury, but that is also vague and lacks any kind of pay-off. There are a lot of story threads that seem to be building up to something important, but they must’ve been forgotten as nothing ever comes from them. Maybe they were relevant in the original script or maybe they were only there to pad out the running-time. The third act though is when shit really gets out of hand and this is where I think the behind-the-scenes problems began to upstage the rest of the production…SPOILER ALERT BEGINS! What in the hell was going on? They did something to Kazuya’s brain, but I didn’t get what it was outside of apparently being able to stop him from attacking. How come the love interest was making out with Heihachi? How come she died? Did Heihachi just teleport? How come Heihachi doesn’t want to fight Kazuya and yet he…does…seem to want to fight Kazuya? NONE OF THIS MADE SENSE! SPOILER ALERT ENDS! Of course, tying the ending into the beginning of the events of the next/first film will only give you a headache. The ending of “Tekken 2” made me wonder if I was supposed to be respecting Kazuya instead of Heihachi during “Tekken (2010)“, even though Kazuya was a murdering rapist who tried to murder his own son while Heihachi was at least somewhat noble…God this was shit. “Tekken 2: Kazuya’s Revenge” looks cheap, the acting isn’t very good, the storyline is a disaster and you can’t really enjoy it on any level. The choreography isn’t bad, but it’s not good enough to make up for the gratuitous walking sequences. It’s not a faithful adaptation of “Tekken“, nor is it even a faithful prequel to that unfaithful adaptation of “Tekken“. It’s just….BORING.

Nudity: I don’t remember anything explicit, but there are a few sex scenes. Kazuya even gets raped by a chick, although both are clothed, so I don’t know…

Overall: “Tekken 2: Kazuya’s Revenge” sucks and should be avoided at all cost. It made me appreciate its predecessor on a whole new level.