(Written by Jonathan and Christopher Nolan)

Plot: Eight years after taking the blame for the murder of Harvey Dent, Bruce Wayne (Christian Bale) has retired the Batman and lives in seclusion. When a notorious thief -Selina Kyle(Anne Hathaway)- steals Bruce’s fingerprints, Bruce finally decides to re-enter the world. It turns out that Wayne Enterprises hasn’t been doing so well, but that’s the least of his problems. A terrorist named Bane (Tom Hardy) has been growing an army in the sewers and he has nefarious plans for Gotham. He’s incredibly strong, intelligent and it was he who hired Selina to get Bruce’s fingerprints. But why? Bruce must become the Batman in order to stop him, but has he truly met his match?

I have to confess, at if this point of the review, I can’t decide whether I like or love “The Dark Knight Rises“. I do think that it is a good movie, but is it very good? Is it great? I can’t decide. On one hand, the movie covers all of its basis. I had a positive emotional response to the characters, found the events rather engrossing and appreciated the films technical merits. On the other hand, it is a very flawed film and while I might love it, I also find myself frustrated by it. There is a spectacular movie in here. Actually, scratch that, there are two or three spectacular movies in here. But that’s the problem. This is one movie. It’s not meant to contain the stories of two or three films. So the question is: How much did the weaknesses bother me? Hopefully by the end of this review, I’ll have the answers I need in order to determine “The Dark Knight Rises“‘s worth.

The difference between this and Nolan’s previous Batman films is that they knew what they wanted to prioritize. “Batman Begins” was about Bruce becoming the Dark Knight and fighting the war against corruption and crime within Gotham. It had multiple villains, but that was fine because the movie was more interested in Bruce. The villains represented his internal conflict. “The Dark Knight” was much more linear, being primarily about the cat-and-mouse games between Batman and the Joker. The majority of the movie was them fighting for Gotham’s soul, with Harvey ‘Two Face’ Dent being at the center of their feud. 80-90% of the film is about them trying to outsmart each-other. My issue with “The Dark Knight Rises” is that it’s very unfocused when compared to the two. Is the movie about Batman fighting Bane? It starts this way, but Batman vanishes for awhile and the bulk of the film is more interested in Bane conquering Gotham itself. Could the movie be about Bruce’s inner journey? A lot of time is dedicated to that, but that only works when the movie is 100% about him. When the majority of the story is dedicated to OTHER PEOPLE, you can’t really argue this. “Batman Begins” went this route, but Bruce/Batman was always participating in the plot. This time, he’s often absent from the meat of the story. But moving on, “The Dark Knight Rises” offers many other different possibilities. Is the movie about the relationship between Bruce and Catwoman (Selina Kyle)? Nope. In fact, story-wise, she’s the films biggest failure. What about Detective John Blake (Joseph Gordon-Levitt), who might become Batman’s successor? An intriguing concept, but it’s treated as an afterthought. 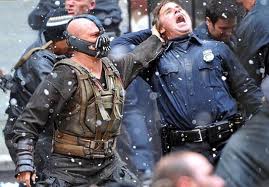 Yet I can’t deny that each of these subplots did keep my interest. Bruce’s plight was very moving. He’s pretty much a Howard Hughes-esque wreck at the start of the movie and it’s pretty hard to look at him. Watching his character slowly reform is engaging because he has more faults. He isn’t in the same shape as he used to be, both physically and…spiritually, I guess. He’s a wounded character but he never becomes bitchy or unpleasant. Watching Bane practically own the entire city was rather captivating too. I liked all of the work that went into his plans, even if they’re pretty absurd. With that said, he almost seemed too good. One thing I liked about its predecessor is that Batman occasionally was able to take the lead against the Joker. I always feel that thrillers work best under the “Dirty Harry” rule. Find a protagonist who is awesome. Find a villain who is equally awesome. Don’t let one side always dominate the other, as when they’re equal, it makes things unpredictable. Bane pretty much is God, which lessens the suspense. But that doesn’t mean that the movie is devoid of tension or unease. Bane is a pretty cool villain and I thought Tom Hardy did a spectacular job as him. He had a menacing presence that made him unnerving. So that subplot managed to work too.

But ask yourself, were the Catwoman or Detective Blake subplots necessary? Beyond catering to the fanboys, did they really add anything to the narrative? With a few tweaks, they could’ve been removed and the story wouldn’t have been effected. Selina Kyle especially is a mess. They never actually call her Catwoman, so why is she dressed in that uniform? What makes her character who she is? She’s very underwritten and the only attempts to flesh her out involve lazy exposition from Bruce, who barely knows her. “Batman Returns” was much more clever with this character, as she was dark but not completely evil and you weren’t sure how she would develop. With this Catwoman, she’s more conventional and her only real purpose is to be a potential romantic foil to Batman. But Anne Hathaway at least did a good job. In fact, the entire cast deserves a lot of praise because even when their characters are iffy, the actors make them work. Nolan gives everyone a handful of great moments and Christian Bale gets even more to do than usual. One thing I respect about Nolan’s trilogy is that it never loses sight of Bruce Wayne and Christian Bale has mastered the role. 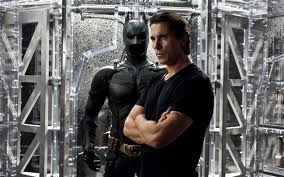 One thing that I respect about Nolan is that unlike others directors whose names we bother to remember- Zack Snyder, M. Night Shyalaman, Quentin Tarantino, Robert Rodriguez, etc-, Christopher Nolan’s direction is fairly minimalist. He just focuses on telling the story and his visual touches aren’t heavy handed. I’m all for style-over-substance, but Nolan’s lack of style is a nice change of pace. I liked the low key suspense that came from the characters interactions. I liked the atmosphere that came from the snow drenched locations. I liked how Nolan became a little more creative with the action scenes. Batman finally uses darkness in his favor without any of the action becoming incomprehensible. While the fights between Batman and Bane aren’t amazing, they are probably the best fights in the whole trilogy. It’s not just a brawl because Batman is forced to strategize, which is a nice touch. As much as I liked the Joker, his final battle with Batman was sort of lame. Not here though, I was completely satisfied with how the fights went down. The special effects impressed me because they’re practical effects. Even the Bat plane looks freaking real. Finally, Hans Zimmer is a brilliant composer and the score is just beautiful. It fits this movie perfectly.

So we’ve now come to the end of this review and it just occurred to me that I didn’t list any of the really objective criticisms. I didn’t mention the weak conclusion to Bane’s story, the awkward time skips or that ridiculous scene where the cops charge a bunch of armed thugs in the open road. This is because the more I think about it, the more I realize that my bigger complaints weren’t weaknesses as much as they were missed opportunities. Beyond Nolan’s stellar direction, the exceptional acting and the rousing score, I thought all of the subplots/characters were interesting. I was totally into them. But imagine how much better it would’ve been if they didn’t cram so much into one movie. Then the script could breathe properly and all of these engaging ideas would’ve been fully explored. I guess Nolan decided to force all of his ideas into one movie because he didn’t want to go beyond making a trilogy. But all of that aside, I did really like this movie. I never thought it lagged and was always wondering what was going to come next. It’s not a perfect movie, but it was the perfect way to end the trilogy. Even though I’ve spent half of this review bitching, I’m going to give it the higher rating. I adored it, even if it didn’t reach its full potential.

Overall: I didn’t like “The Dark Knight Rises” as much as “The Dark Knight“, but I prefer it more than “Batman Begins” because I could actually decipher the action. I really enjoyed it.