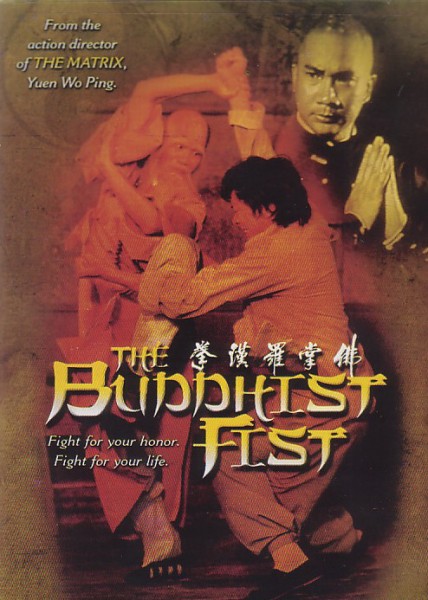 Plot: Shang (Shun-Yee Yuen) learns that his godfather has vanished, so investigates his disappearance and discovers a conspiracy involving murder and an important artifact.

“The Buddhist Fist” is so close to achieving classic status that its failure to do so makes me want to wind my arm up and punch this movie in the face- in which it promptly dodges and delivers a series of awesome looking counterattacks, knocking my ass out…This is almost painful to describe, because my jaw was constantly resting on the floor as my eyes beheld the amazing choreography on display. Yet at the same time, my ears were bleeding as they were being brutally assaulted by obnoxious comedic bits. The end result was that my feelings were a pool of admiration and resentment, both so mixed up that I can’t even bring up one without mentioning the other. “The Buddhist Fist” is an intriguing combination of elements that were popular at the time and boasts some of the best fight sequences ever, but I found its style of humor to be nothing short of annoying.

I like the idea of a kung fu mystery, but the problem with this angle was that the whodunit is too transparent. I thought it was hilarious how the director would go out of his way to make sure the killers faces could never be seen clearly, when there aren’t enough credible suspects- making their identities obvious. Hmmmm, could the killer with facial hair be that suspicious dude who also has facial hair and the same voice? Or could the fallen monk be the best friend? That sounds like a spoiler, but we can see enough of his facial features to know that he is not the old man- the only other suspect. Plus, the fallen monk drops the pendant that was last seen being given to the best friend… Yet despite being so obvious, I was often confused. The timeline of events isn’t always clear and various characters look like they’re going to be prominent, but then are unceremoniously removed from the story. I will concede that at the absolute least, the plot is kind of unique. When you consider what was trendy during 1980, “The Buddhist Fist” combines the Shaolin conventions popularized by the films starring Gordon Liu and the comedic everyman conventions popularized by the films starring Jackie Chan. I might not have liked the script, but I will remember it, which doesn’t happen often within this genre. The comedy was way too broad for my tastes and I often found the gags to be unnecessary and somewhat tasteless. The mugging, sight gags and bad dubbing was more extreme than usual. This is yet another case of ‘bi-polar tone’ as the third act takes a MUCH, MUCH, MUCH darker path. The fate of the godfather is outright traumatizing and the tragic finale felt like it belonged in another movie. Occasionally the absurdness made me crack a smile (the hunchback), but the attempts at making me laugh ended up keeping me from embracing “The Buddhist Fist“. 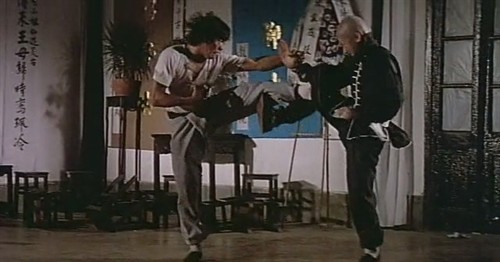 There is a lot of action though and it is most definitely worth sitting through plenty of groan inducing material to experience. While I don’t think Shun-Yee Yuen has the charisma to be a leading man, he excelled in his martial arts abilities. The choreography is designed to showcase every performers acrobatics and reaction time, which meant that the action had a fast and smooth pace. Woo-ping Yuen makes an excellent use of his locations, various props and situations to ensure that the fighting never becomes stale. There is a good balance of hand-to-hand combat and weapon specialty, all of which looks authentic and stylish. While the humor usually annoyed me, the comedic antics within the fight choreography was reminiscent of what Jackie Chan was doing at the time. Yet when things turn grim, the action turns significantly more violent and edgier. The final battle wasn’t just amazing spectacle, it was also oozing with drama- which was very effective. So in a sense, “The Buddhist Fist” embodies the best and worst of the genre and time- comedy that presumably only entertains Chinese viewers during its time period and awesome martial arts action that will entertain ‘past, present and future’ audiences.

Violence: Rated R worthy. It gets pretty twisted at times.

Nudity: Some closeups on a (clothed) female bottom as part of a gag.

Overall: As amazing as the battles within “The Buddhist Fist” were, the real fight was between the awesome martial arts choreography and the annoying sense of humor.