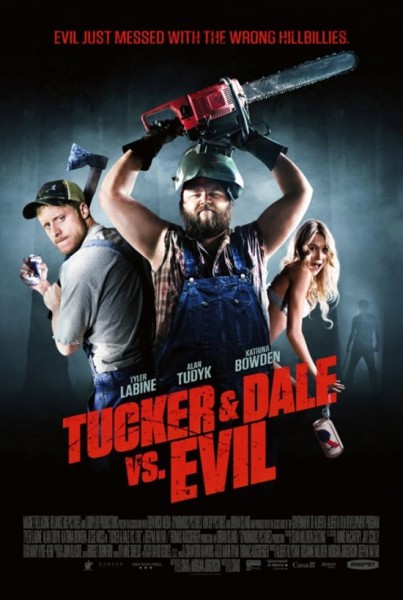 Plot: A group of teenagers take a trip up to the woods where they can party hardy, but the festivities are interrupted by a duo of bloodthirsty hillbillies (Tyler Labine and Alan Tudyk), who kidnap Allison (Katrina Bowden). The teens must fight to rescue their friend. Except there’s a twist! The hillbillies aren’t really bloodthirsty and everything has just been a misunderstanding, having actually rescued Allison from drowning. But they now have to defend themselves against bloodthirsty teenagers!

“Tucker and Dale Vs Evil” is a comedy/slasher that allows us fake critics to use fancy terminology like ‘satirical’ and ‘deconstruction’ and since I am most certainly the fakest of the critics, I shall abuse my internet-given right! “Tucker and Dale Vs Evil” cleverly deconstructs the hillbilly slasher subgenre of horror, satirizing- if not downright parodying- the cliches and conventions that usually come with these kinds of movies. Ah, I feel smarter already. Anyway, the only thing I knew about this little gem was that it was a comedy/slasher, but I presumed it would be about the titular characters fighting off hordes of the undead or something like that. Instead, it opens like every other slasher. Teenagers who are going into the woodland mountains for a weekend of sex, alcohol and drugs immediately find themselves being harassed by the hillbilly locals. Okay, this was not what I was expecting. When it became more apparent that the hillbilly locals weren’t really harassing them, but merely have poor communication skills, I knew I was in for a treat. What follows is the teenagers trying to butcher these poor hillbillies, making this a reverse-slasher. “Tucker and Dale Vs Evil” is surprisingly intelligent, using its unique concept masterfully. But instead of being a stuffy critic-catering piece, it opts to be entertainment incarnate…usually. Because while it’s definitely good, it’s also a lesson that one should not bite off what they can’t chew…unless you’re willing to spit it out and cut out a smaller portion…but I don’t see how that fits this metaphor. Plus, that’s pretty f@cking disgusting. Awful table manners…just awful…

There is a lot more comedy than there is horror, which can be a blessing or a curse depending on you. The comedic elements will appease those who might not like slashers, although why you’d even be watching this is a whole new topic. But comedy is still subjective, so even though I laughed my ass back on (it was already off), you might find it trite and annoying. What made it funny for me? Tyler Labine and Alan Tudyk have great chemistry and comic timing, so much of the film relies on their reactions to all this mayhem. While they aren’t dumb, they have many face palming moments where you can’t help but chuckle at their denseness. When they enter their dilapidated vacation home for the first time, it appears as if it was previously inhabited by some deranged maniac. There are newspaper clippings of massacres, murders and disappearances posted on the wall, but what do they notice? The coupon, where if you buy 3 hotdogs, you get 3 free. I lol’ed hard at that kind of stuff. They get plenty of goofy lines, awkward homoerotic moments and hilarious facial expressions to work with. But the teenagers also provide their own brand of comedy. They’re blatant stereotypes and…well, you know how everyone complains about how stupid the teenaged fodder are in these movies? “Tucker and Dale Vs Evil” has a lot of fun with that. When they die, it’s often becomes they do moronic things and get themselves killed in the process. Without spoiling who, one tries to push Tucker into a wood chipper…but slapstick comedy ensues. And extreme gore…It’s awesome. 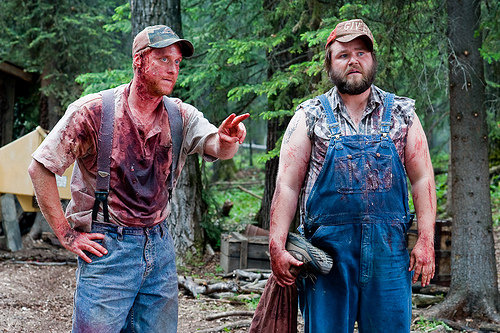 Speaking of which, “Tucker and Dale Vs Evil” doesn’t play it safe in the splatter department. The bloody set pieces aren’t necessarily original, but they are wildly over-the-top and gruesome. There is a lot of CGI, but I felt it blended in with the practical effects pretty well. At no point was I ever taken out of the action because a kill looked fake. It’s not anywhere near as vicious as “Hatchet“, which also was a slasher/comedy hybrid, but they have different focuses. “Hatchet” was a brutal slasher that was mixed in with comedy, but that created some tone issues and confused other viewers as to whether they were supposed to be taking it seriously. It was a slasher first, a comedy second. “Tucker and Dale Vs Evil” is the opposite. It’s a more clean-cut comedy and the kills never really diminish. The humor often comes FROM the messy death sequences, which are too silly to be mean spirited, so I never had any problem with the tone. There’s no suspense and only one scene resonates with any kind of atmosphere, but it’s not trying to be scary, so I didn’t mind. Yet I have to remind you that to enjoy “Tucker and Dale Vs Evil“, you have to appreciate its brand of humor. I know that should be obvious, but “Hatchet” (for example) isn’t required to make you laugh, because it’s also successful as a legit slasher. “Tucker and Dale Vs Evil” relies more on the comedy. Had I not laughed, I wouldn’t care how creative the idea was or how gory the kills were. I likely would’ve been bored. So treat “Tucker and Dale Vs Evil” like you would any comedy. The gore is just a bonus.

Unfortunately, it begins to run out of steam during the third act. I had to think for quite some time as to why this happened, as it’s not like the final act was bad or anything. There were still some golden moments and in itself, it was fairly entertaining. But then it occurred to me. The main problem with “Tucker and Dale Vs Evil” is that its gimmick begins to wear thin. When the teenagers would mistake a harmless action as something terrible early, I could buy it, as absurd as it would be. But as time goes on, this starts to feel very forced. Even worse, it becomes redundant. I think the writer/director had started to run out of ideas, so began coasting off of his previous ideas. Everything that lead to the ending was silly, but clever. But the actual ending was just silly in a more lazy kind of way. This meant that “Tucker and Dale Vs Evil” started to get tiresome during its third act, which is a MAJOR problem, considering the film is incredibly short. On a smaller note, I did feel that there should’ve been nudity. It’s odd seeing a satire of a slasher without any real nudity. But that’s something I can get over with easily. My final complaint is that I didn’t like it when the flick tried to be deep. The leading lady wants to be a therapist and believes that most of the worlds problems come down to miscommunication. Besides coming close to crossing the line of the much dreaded ‘Exposition 101’ (at least these scenes don’t take place in a classroom), the fact that her belief happens to closely follow the story isn’t even portrayed in an ironic way. It just made me gag. Furthermore, the final scene REALLY undermines the ‘don’t judge a book by its cover’ message that “Tucker and Dale Vs Evil” crams down our throats. I felt like the director betrayed his own vision for the sake of a cheap gag. I generally wouldn’t care about this kind of inconsistency, but if you’re going to aim to be something thought provoking and meaningful, then be sure to see this through until the end. 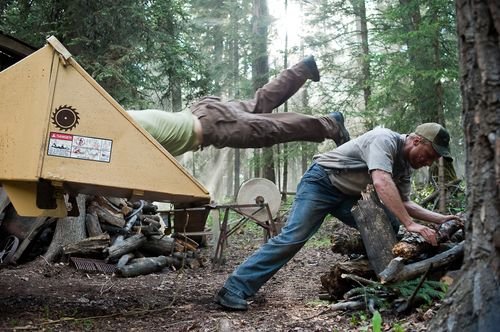 But luckily, I was really impressed with the first two acts. “Tucker and Dale Vs Evil” provided some bloody death sequences and plenty of side splitting laughs, but it works because it’s a surprisingly smart genre flick. I loved how it took a very formulaic set-up, broke it down and rebuilt it into something new and creative. It might be even better for me, considering I’ve never been a huge fan of hillbilly horror. Sure, I’ve liked a handful of them (“Just Before Dawn“), but the genre is over-saturated with psycho-killer hillbillies. But I am very familiar with them, so whenever “Tucker and Dale Vs Evil” would spoof a cliche or convention, I’d immediately know what it was referring too. Then since I’m sick of them, I’d get an even bigger kick out of the movie making fun of that shit. I only wish it had a more deserving finale. But I also wish I was a real critic, so I guess we can’t have everything! If I were to compare it to other comedy-slashers…I’d say “Behind the Mask: The Rise of Leslie Vernon” was better, but it was more subtle, so maybe you’d prefer the wackiness of “Tucker and Dale Vs Evil“. “Hatchet” is on the same level as this one, but for completely different reasons. I probably don’t even need to say that it’s better than “Scary Movie 5“, but then…I guess I just did.

Nudity: None, although it teases us at times.

Overall: “Tucker and Dale Vs Evil” is a hilarious comedy/slasher that’s only bogged down by a repetitive finale and clumsy attempts at being deep. But I do think you should all watch it, regardless of the flaws. It’s funny!