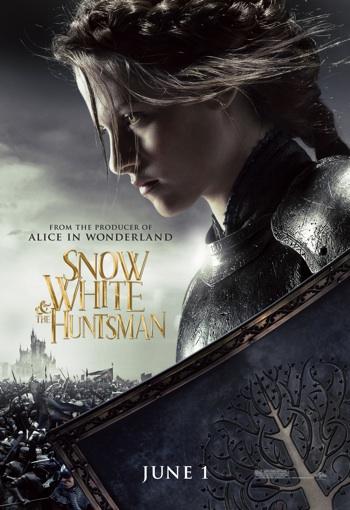 Plot: Snow White (Kristen Stewart) is a beautiful and kind Princess whose new Stepmother, Ravenna (Charlize Theron), locks her in a tower after she kills Snow’s Father and takes over the Kingdom. It turns out that Ravenna is a dangerous sorceress who gets her power from draining the youth out of young women. Ravenna learns that devouring Snow White’s heart will give her immortality, but Snow White escapes in the ensuing chaos.  The girl finds herself alone in a cursed forest, where no one dares to enter. So the evil Queen recruits Eric (Chris Hemsworth), a huntsman who has been to the forest, to bring her back.

If the films visual style works on you, expect to be enamored by nonstop, eye-catching imagery. I was worried that the film- in a desperate attempt to seem gritty- would be like that Ridley Scott “Robin Hood” movie, where it relies on dull, washed out colors. In my eyes, these types of movies needs to have vivid coloring. They need to be over the top with its eye candy and this film delivers. The castles, kingdoms, costumes, etc all look wonderfully exaggerated. But when the movie enters into the realm of fantasy, it makes sure to go all out. The cursed forest is as menacing looking as it should be and the enchanted forest is..enchanting! Filled with fairies and other mythical creatures, every new effect had my audience gasping in the theater. The CGI is usually good, but even when it fails, it adds to the fairy tale atmosphere. It does appear that a lot of the sets were practical and the film seemed to favor extras instead of mass CGI troops for the big battle sequences. It’s too bad that the grand finale is rather bland, rushed and unexciting.

But if the visual style doesn’t work on you, you will notice the scripts problems. It’s unfocused, being unsure who it wants to follow or what it wants to focus on. The whole idea of Snow White being this great Politician is almost as absurd as her possessing some ambiguous supernatural power that causes the Earth to ally with her (!!). Could this have worked if Snow White wasn’t such a static character and the embodiment of perfection? Maybe. The Huntsman at least has some depth to him but even then, this character is a cliche and his development is cliched. The final part of the love triangle is William and honestly, I got the impression that the filmmakers weren’t sure what they wanted to do with him. Once he joins the party he barely seems to register. Speaking of which, the love triangle is tacked on, but the film isn’t interested in it at all. This means I was never bored, but why have it at all if you’re going to do nothing with it? The relationship between Snow White and the Huntsman isn’t unlike the love story featured in “Prince of Persia“. They bitch at each-other and that makes them fall in love? Weird. The difference between the two films is that “Prince of Persia” spent a lot of the movie at least trying to flesh out the relationship. “Snow White and the Huntsman” spends like two minutes on it (one scene is an embarrassing attempt at foreshadowing too). Either way, these people bore me. That’s not the fault of the actors though. Stewart does fine with what she had to do, although she lacks the charisma to be the leader the movie wants her to be. She looks great though. Hemsworth is more-or-less just playing “Thor” again, although sometimes he seems to be channeling Sam Worthington. Still, he gives it his all and I salute him for doing his best.

The film occasionally seems like it wants to be about the Queen, who is the most complex character in the whole movie. Charlize Theron’s performance is both the best and the worst. When she’s calm, she’s stunning and perfect for the role. But when she yells, her scene chewing started becoming unintentionally amusing. At least she’s entertaining though! But to me, the films biggest mistake was not following the dwarfs, who stole the show. Each of them are played by an actor I recognized (Ian McShane, Bob Hoskins, Nick Frost, Ray Winstone to name a few) and somehow, despite their limited screen-time, each of them had distinguishable personalities. They had the funniest, saddest and warming parts in the whole movie.. Personally, I wish the movie was about them and their relationship with Snow White. But a las, Hollywood is more interested in hunky men fighting over pretty women.

The scripts blunders go beyond that. There is a lot of wasted screen-time on unnecessary subplots and characters, which makes the movie go on for too long while not giving enough time to focus on what matters. It’s another example of why multiple screenwriters rarely works.  But luckily, the director DID know what to focus on. He wanted to to create a sweeping epic with as many unique and dazzling visual effects as possible. For this, I found my anchor to the film. Sure, it’s not “Avatar“, which proved amazing CGI can redeem a mediocre script. It can be compared to “Alice in Wonderland“, but that that films imagery couldn’t save the excruciating attempts at being funny (nor the awkward attempts at being dramatic). Here, the script is just harmlessly sub-par, it’s best attribute being that it never takes away from the visual experience. But if awesome visuals can’t drive a movie for you, then maybe you should avoid “Snow White and the Huntsman“. It’s got nothing else going for it.

Note: This review is being categorized as a martial arts and horror film. It contains fight scenes involving swords, axes and arrows while also having some chilling sequences that might be creepy for some viewers. However, it is a fantasy-epic before being either of those two genres.

Nudity: None. Although rape is mentioned.

Overall: “Snow White and the Huntsman” is worth watching if you’re into visually oriented movies. If you aren’t, then it’s not worth more than a rental.