Plot: After the destruction of the Death Star, Darth Vader (David Prowse; voiced by James Earl Jones) launches a major counter-attack against the rebellion. In order to track down his nemesis, Luke Skywalker (Mark Hamill)- who is training to be a Jedi, Vader mercilessly pursues Luke’s comrades: Han Solo (Harrison Ford), Princess Leia (Carrie Fisher) and the others. Will Luke complete his Jedi training before it’s too late? Also known as “Star Wars: Episode 5“.

I find it thoroughly amusing that as a child, “Empire Strikes Back” was my least favorite Star Wars movie. There were a handful of reasons at the time, the most prominent being that I wasn’t fond of seeing the characters go on their separate paths or maybe I thought I’d get cooties from watching Han and Leia kiss. Or maybe it was the incest? I had been told of the big awkward revelation in “Return of the Jedi“, so imagine my disgust when Leia lands a pretty intense smooch on Luke. Once again, that remains the most awkward subplot in the Star Wars lore. But my tastes in film grew along with my genitals over the years and now I realize that the 2nd-turned 5th- Star Wars adventure is not only the best, but the most iconic in the already iconic trilogy. If you can, watch the original theatrical version, because it’s better. With that said, The “Star Wars: Episode 5” special edition is probably the least obtrusive of the special editions. The CGI additions were used sparingly, although the biggest changes didn’t especially thrill me. We get to see the Wampa, which I thought was more terrifying when it was mostly left to our imagination. Nevertheless, I can live with this and might even appreciate it as an alternative if the original was more readily available. I’m not sure what I feel about Ian McDiarmid being inserted as the Emperor, because I felt the additional dialogue was unnecessary and manipulative. But I can stomach that as well, because McDiarmid made the role his own, even though he was not the first to be in those shoes. I just don’t see the point of changing something that isn’t broken. But regardless of which version you watch, brace yourself for awesomeness. “The Empire Strikes Back” is the perfect continuation of the “Star Wars” saga, fleshing out the Universe and developing the characters, while offering superior effects, cinematography, writing, acting and direction.

“The Empire Strikes Back” uses a more episodic narrative that actually divided audiences when it was first released. I understand why and part of me prefers the more contained storyline of “Star Wars (1977)“. Yet this was structured in a way that allows the audience to experience more of the Star Wars universe, which there wouldn’t be time for in a more conventional narrative, while balancing the time amongst the characters rather evenly. The filmmakers brought back the same level of creativity that made the first film so memorable, creating even more iconic vehicles, props planets, uniforms, alien races, while also showcasing much of the old. The special effects are more advanced, with the sets managing to be even larger and the cinematography being even more eye popping. While fans like to beat up on George Lucas’s legacy thanks to some admittedly terrible decisions, I did consider him to be a fine director and exceptional storyteller during his prime. Yet Irvin Kershner seems to have been a much better technician, bringing in a lot more sophistication in how scenes are framed and paced. I thought there was more suspense, partially due to the higher stakes, but also just in the way Kershner builds up the next hurdle in the storyline. The use of lighting and smoke, especially during the finale, created a nerve wracking but exciting kind of atmosphere. The light saber duel in particular was riveting, filled with a lot more stunts, while also telling a good story using visuals. Fans tend to use “Empire Strikes back” to prove that Lucas was never great, because his involvement was reduced compared to the other films, which is why Lucas probably isn’t as fond of it. I’m not putting down Lucas. I’m building up Kershner. He deserves more praise than Lucas deserves criticism. 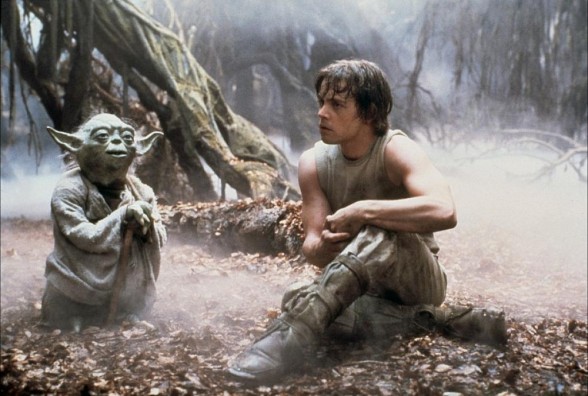 I also love how the characters continue to develop, without losing their original identities. Luke (Mark Hamill) still feels like the same Luke, just haughtier and more bad-ass. We can see his potential to become a great Jedi Warrior, but we also see how vulnerable he is to being seduced by the Dark Side, which added to the drama. Han Solo (Harrison Ford) and Princess Leia (Carrie Fischer) retain their classic characterizations, but there are a lot of subtle moments that speak volumes about them. They have great chemistry together, with Han delivering some of my favorite lines. Darth Vader is much more malicious and threatening this time around, especially in contrast to the original, where he was…also very malicious and threatening. But he’s somehow even more terrifying, even though we also see the first signs of humanity in the character. Obi Wan Kenobi (Alec Guiness) has a cameo and if I can criticize anything, his presence would be it. I didn’t really think his appearance was necessary and Guiness seems to be phoning it in. The remainder of the crew- R2D2, C3PO, Chewbacca- continue to be just as interesting as they were before. As for the new editions, we have Lando (Billy Dee Williams), who is even more suave than Han, while he’s also not as reliable. He’s incredibly cool though and I’ve always admired his character arc. Yoda (Frank Oz) has become an icon and is both comical and serious. When he speaks, you pay attention and I liked his quirkiness. While not as prominent, Bobba Fett was a personal favorite as a kid. He’s so freaking cool, despite his limited screen-time. Not only did I think the character development was a step up, but the dialogue and acting were much more polished. Once again, there are plenty of golden lines that have become ingrained into our collective memories. But I can’t think of an awkwardly delivered piece of dialogue, while Hamill and Fisher seem significantly more comfortable in their roles. For the most part, the extras were a lot lively as well.

Kershner said he was more interested in focusing on the characters than special effects and he definitely took the characterizations a lot farther for his sequel. But make no mistake, “The Empire Strikes Back” is still an adventure flick, arguably even moreso than its predecessor. There are plenty awesome action set pieces and each world is vastly different from the last. There is a planet completely covered in snow, a city in the sky, a swamp world, a giant meteorite and space itself, allowing us to see more of this universe in contrast to the limited locations of its predecessor. “The Empire Strikes Back” might only exist to set up “Return of the Jedi“, but I think it contains the most memorable, epic moments in the entire franchise. In fact, I think I’d have an easier time counting the parts that don’t stand out as awesome and iconic. This is a cool ass movie that is more than satisfying with its content output, but also really leaves you excited for “Return of the Jedi“. Unfortunately, the general consensus is that the third Star Wars entry is the weakest, even though it’s still worthy of the Star Wars name. I haven’t seen it in years, even though it was my personal favorite as a kid. I think the difference is that whereas the entirety of “The Empire Strikes Back” has a home within my memory, I can only think of parts of “Return of the Jedi“- mainly the first act. But in its defense, “The Empire Strikes Back” is probably the best Star Wars flick, so it might be a little unfair to compare them.

Violence: PG. There are some startling moments though, considering the rating.

Nudity: Nothing outside of kissing.

Overall: “The Empire Strikes Back” is not only vastly superior to the prequels, but it’s likely the best entry in the original trilogy and that says A LOT.

Note: This was an early work and my writing is crude and some of my critiquing might be wrong. The prequels, whether they’re better or worse than what the masses claim, will probably never be revered as ‘classics’. My rating has changed as well.

The follow-up to the first “Star Wars” was initially greeted with mixed reviews, which made me realize something. The reason why the prequels haven’t been so well-received by fans is because they saw the originals as kids, so it grew on them. I’m sure in twenty years, the prequels will be just as popular as the original trilogy. It’s ironic in that this film is considered by many to the best of all the films. Is that true? Possibly.

While I preferred the more contained storyline of the original, I think I like everything else in this sequel. While the special effects are still outdated, there was a lot more of them and some of them were very impressive. The creativity is still there(loved the AT-AT’s), and Kershner is definitely a better director than Lucas. In my last review, I kind of criticized Lucas’s directing abilities. In truth, I was sort of mistaken. Lucas does well at telling a story, but he generally does it in a straight-forward manner. Kershner throws in some creative camera angles and shots, making the film a bit more complex and accomplished. I loved the constant set changes(The swamp, the arctic, the cloud-city), and the suspense is pretty good as well.

I also liked the growth in the characters. Luke is becoming more of a badass, and never got on my nerves this time. The relationship between Han and Leia is growing and Yoda makes his debut. He’s one of the most iconic characters of all time. Finally, the big twist at the end is also memorable. The dialogue is much better, and so is the acting. In fact, the acting all around is strong.

Violence: A cut off hand, and some random bits of violence. Mostly implied.

Overall: “The Empire Strikes Back” topped the first film for the most part, and is definitely worthy of being called the best in the series.