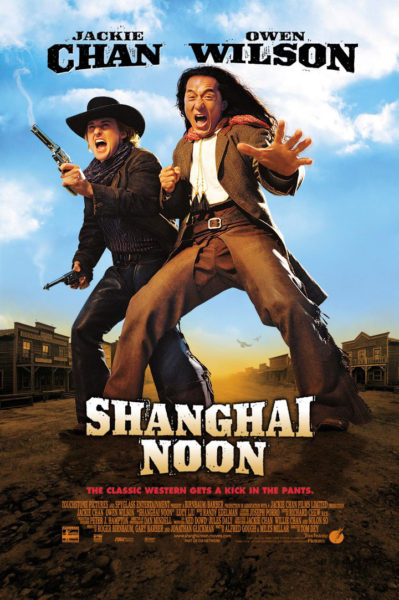 Plot: Chon Wang (Jackie Chan) is an Imperial warrior who travels to the Wild West in order to rescue the abducted Princess Pei Pei (Lucy Liu), from the treacherous Lo Fong (Roger Yuan). He has absolutely no idea how to survive in this foreign landscape, but fortunately…or unfortunately…he forms an uneasy alliance with a bumbling bandit named Roy O’Bannon (Owen Wilson), who has plans of his own. They gradually become friends as they accidentally tear up the wild west on their way to the Princess.

“Shanghai Noon” is not the best Jackie Chan movie…although it might be his best American showcasing, but there is something undeniably likable about it, even with the things I don’t like about it. This is the kind of project that could go VERY wrong, as it contains a lot of stuff that normally annoys me, such as modern lingo being loosely thrown around in a period piece setting, because the unrestrained cast was ab-libbing a bit too much…and by the cast I mean Owen Wilson…and by ‘a lot of stuff that normally annoys me’, I also mean Owen Wilson…and when I referred to things I didn’t like about it, I mean Owen Wilson again…Yeah, I’m not the biggest Owen Wilson fan in the world, although my feelings towards him are somewhat complex…But I’ve heard very few bad things about “Shanghai Noon“, even though it definitely feels like the script was gutted in the editing room. There are some plot holes (that I hear were filled in deleted scenes), lazy lines of exposition, awkwardly resolved storythreads and Owen Wilson. The movie doesn’t really inspire the same adoration that often accompanies “Rush Hour“, but it doesn’t really inspire the same hatred that often accompanies “Rush Hour” either. Everyone seems to enjoy “Shanghai Noon” on some level, but why is that?

In a word, synergy.

The fights are tame compared to Jackie Chan’s Chinese works, with no memorable stunts and the choreography is relatively standard, but they still end up being highly entertaining. The novelty of seeing a Chinese Warrior tackle the Old West never really gets old, so the visual contrasts are a big part of why the fights are so fun. The comedic timing from Jackie and the rest of the cast just…clicks…Jackie’s mugging, even when he starts giving into low brow humor, always kept a smile on my face and never became too overbearing. I also loved how all of the Outlaws, Native Americans and other Western Caricatures reacted to his antics, as a lot of them don’t seem to even realize they are in a comedy, which makes it funnier. The editing and musical arrangement also helped keep the energy high. “Shanghai Noon” is a very smoothly paced movie, never slowing down yet also never rushing to the next set piece. I actually believe that more hardcore stunts or advanced choreography would’ve caused the movie to prematurely peek, burning the audience out before the 3rd act. The fight scenes work perfectly within the context of this setting, tone and story. Now Owen Wilson might be my least favorite part of the movie because some of his lines just struck me as lame (“I might not know karate, but I know crazy“) and his quips were just too anachronistic on their own…But do you know what? Owen Wilson is still a major reason why “Shanghai Noon” works. He and Jackie Chan have great chemistry together and I loved how they would react to each-others shenanigans. They carry the movie and the movie carries them, creating perfect synergy. “Shanghai Knights” is usually regarded as an inferior sequel, but I enjoyed it for the same reasons I enjoyed this one. There have been talks of a third entry, apparently titled “Shanghai Dawn“, but it’s been 15 years and I don’t think “Shanghai Noon” was a big enough deal to warrant such a delayed sequel…yet I hope I’m wrong? If it could be anywhere near as fun as its predecessors, it would be worth it to me!

Oh and for the record, I don’t really have anything against Owen Wilson and his style of humor, as he has grown on me over the years. Any hostility in this review simply reflects how I felt about him in 2002, even if I still take some issues with some of his lines.

Nudity: A little risque, but safe within the confines of the rating.

Overall: “Shanghai Noon” is a likable, charming movie that doesn’t require you to be a Jackie Chan, kung fu or western enthusiast to enjoy.