(Written and Directed by Eduardo Sanchez) 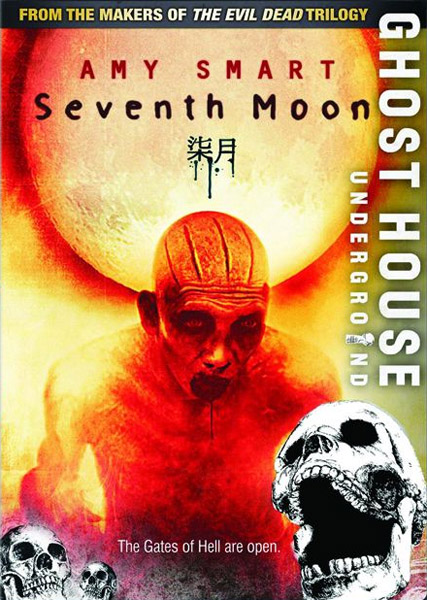 Plot: Melissa (Amy Smart) and Yul (Tim Chiou) are a newly married couple, honeymooning in China. Their guide, Ping (Dennis Chan, who looks a lot like Pat Morita), drives them through a remote area and gets lost. When he arrives at a village to get directions, he suddenly vanishes, leaving the couple alone. When they investigate, they find that the village is boarded up and appears to be abandoned. They soon realize that they are part of an ancient ritual and something is hunting them. But what?

The low budget, American horror circuit has become quite mundane, or perhaps it has always been mundane and I’m just remembering the finer efforts like “Halloween” and “Friday the 13th”. Or if those movies are a bit too respectable for you, even “The Burning” and “Just Before Dawn”. But with big budgeted movies only getting bigger, the low budget films only become cheaper so the risks of failure are minimal. Sadly, this means that low budget horror is almost always devoid of creativity and style. Yet “Seventh Moon” showed some promise in that it had a pretty cool concept. China is a unique location for an American horror film (even though I doubt the bulk of the movie was actually filmed there, could be wrong though), but to me the premise just sounds interesting. The thought of being lost in a foreign land provides a rich sense of isolation and perhaps the supernatural element would be a unique contrast to what we usually get in the west. “Seventh Moon” ultimately is 50% a success, 50% a failure.

When the opening credits revealed that the director was Eduardo Sanchez, I did not recognize the name. In fact, throughout the bulk of the film I was thinking that the director was a talented amateur. He makes some baffling mistakes such as shooting the characters from outside the car window, distorting everything because it’s capturing too many reflections. Maybe that was the intent, but it just looks odd. Other problems I’ll discuss later, but eventually I learned that the director was one of the guys who brought us the polarizing “The Blair Witch Project”. Seriously, that movie was a huge hit, so what in the hell happened to its directors? They almost immediately dropped off the map, not even having a high profile failure. Regardless, “Seventh Moon” shares a lot of traits with “The Blair Witch Project”, even if it’s not a found footage feature. Despite my love of that film, it sort of backfires here. 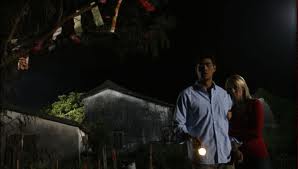 I was totally into this movie at first. Within 15 minutes, the characters have already been established and the horror has swung into gear. As I said, the thought of being stuck in a foreign country is scary on its own and “Seventh Moon” does a good job at amplifying this fear. When the couple investigates the village, the sense of isolation is pretty heavy. The claustrophobia is intoxicating and sometimes this is taken to an extreme, especially when they find themselves stuck in their own car. Sometimes the movie relies on mysterious sounds and is at its most effective when building its mystery. What is going on? Are they being haunted by demons? Ghosts? Crazy villagers? You don’t know. The suspense is harrowing and a few scenes are legitimately scary. My personal favorite sequence is when Yul is trying to push the car out of the mud. He hears something that freaks him out and looks in the direction, but the camera only pans in on the darkness. It’s framed beautifully, and the zooming in was a great touch. But what lurks in the blackness? We don’t know and that’s what made it scary. When we do see ‘the threat’, I thought they were pretty creepy looking, even if their designs are fairly familiar (hint: A popular 2005 horror movie). 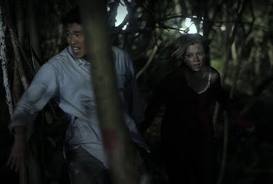 Sadly, the director tries to recapture the same greatness of “The Blair Witch Project” and this is where the movie begins to rot. When terror strikes, the characters begin to break down and their bickering becomes old almost immediately. It’s hard to take the line of “He is a good husband for you, and you are good wife for him” too seriously when within the first 20 minutes, 40% of the dialogue seems so bitchy. Melissa is the stronger of the two, which just equates to her yelling at him constantly. Yul tends to be weak and cowardly, which just equates to him whining a lot. Both actors do fine in their roles, but the characters themselves are not always sympathetic. Perhaps even worse, the shaky camera work was fucking annoying. When they run, the cameraman runs and it becomes disorienting for the wrong reasons. That, along with the shitty lighting, made every scene nearly incomprehensible. I’m not sure what was up with the lighting, but everything was so difficult to see! This meant that some scenes were very scary, but others are unwatchable, BECAUSE I COULDN’T TELL WHAT WAS GOING ON! “The Blair Witch Project” also had bickering characters, shaky camerawork and limited lighting but they all seemed to click in that movie. It added to the growing paranoia and unease, but “Seventh Moon” just never found that flow.

Ironically, save for the characters tendencies to be annoying, the script isn’t that bad. Well, it does have some plot holes and there is one scene that really did not feel necessary (the ‘cult’ scene). But otherwise, I was interested enough as to what was going on and the characters never did anything intolerably retarded. It’s the direction that deserves the blame here. Sanchez, you delivered some good scares and the dread filled atmosphere was effective. But this is almost lost when the viewers can barely tell what is happening thanks to chaotic camerawork and your inability to light a scene properly. The cinematographer isn’t a newbie either, so I have no idea what went so wrong. This isn’t even a found footage movie and yet the camerawork managed to be MORE nauseating than all of those (yes, even “Cloverfield“). Based on Sanchez and his former co-director’s lack of success after “The Blair Witch Project”, I have to presume they got lucky with that film. But at least instead of being bad, “The Seventh Moon” can be summed up as an interesting failure. I loved a lot about it and hated the rest.

Violence: Since the lighting is so poor, it’s hard to tell how bloody some of the violence really was. The dog bit was sort of gruesome.

Nudity: None, although there is a sex scene that felt like padding.

Overall: If “Seventh Moon” sounds interesting to you, give it a look because it does offer some good stuff. But keep expectations low because the flaws almost match the strengths evenly.