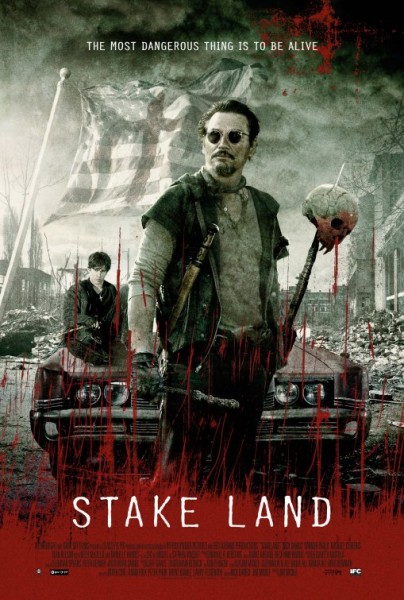 Plot: In a post-apocalyptic world that has been overrun by vampires, cultists and crazies, a group of people try to survive while searching for a safe haven.

I’m not sure whether to laud “Stake Land” as a triumph in low budget filmmaking or condemn the studio system for not putting more money behind it. Seriously, you fund a $150,000,000 floating turd like “Battleship” but then only throw $4,000,000 in the direction of “Stake Land”? BULLSHIT! Don’t get me wrong. “Stake Land” isn’t a masterpiece. It doesn’t fully explore its ideas, but at least it HAS big ideas. This, Hollywood, is a fine example of C.R.E.A.T.I.V.I.T.Y being found in a film that’s made for the masses. Take notes!

Despite being small in the production value department, I thought “Stake Land” did a very good job at fleshing out its world. The Vampire disease (they’re more like zombies with vampiric traits) consumed the world, but it doesn’t stop there. Pockets of humanity have gathered together and formed defenses. There’s something about the setup of these towns that’s reminiscent of spaghetti westerns. Outside the walls of civilization, the vampires aren’t the only things you have to worry about. Our heroes must also endure the rugged terrain and vicious cultists who believe that the vampires were sent from God. It’s also mentioned that clans of cannibals have formed, but unless they cut out scenes of the cultists eating flesh, they never make an appearance. Yet perhaps the biggest threat is introduced in the third act: A vampire who can think. One thing I liked is that even though this is a very bleak world, it’s not filmed in that greyish filter that’s all the rage these days. “Stake Land” lets the story, characters and situations show why this is not a happy place to live in. Jim Mickle does a pretty solid job of maneuvering around the low budget by having the majority of the screen-time take place in the desolate forests. It makes the appearances of (what’s left of) civilizations that much more memorable. This is boosted by the sinister, but understated cinematography, which casts an atmosphere of menace over the landscapes. “Stake Land” was very well made, complete with superb vampire and gore effects. It never looks ‘cheap’, despite lacking resources. 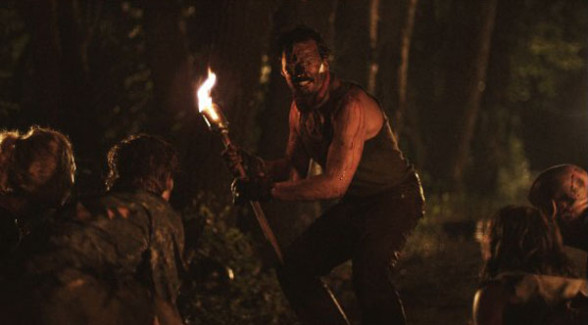 Story-wise, there are plenty of unique quirks that help give “Stake Land” its flavor. When a group of people wishes to declare war on others, what do they do? They capture vampires and use helicopters to drop them into the enemy town. That’s such a simple yet brilliant idea, which I don’t think I’ve seen before. I also appreciated its outlook on religion. On its face value, it could be argued that “Stake Land” is critical of religion, but that is kind of an oversimplification. The nun is continuously portrayed in a positive light. In fact, only the hardcore zealots make religion look bad. I interpreted the theology in “Stake Land” to be less of an attack on organized religion and more a look into how people respond to a crises. Some use religion as a weapon, taking advantage of those who follow them. Others will flock towards the loudest preacher in desperation. Others use it as a symbol of hope. Others will completely turn their backs upon it. Another thing I don’t believe I’ve seen before was how the scarecrow is used as symbolism. It’s almost heavy handed, but since a character sees it as symbolic, I thought that was kind of cool. Yet to add to the high level of cynicism to be found here, a plot points suggests that maybe…MAYBE…the cultists are correct in their beliefs. That alone is scarier than all of the vampire attacks. Yikes!

There’s nothing new about creating a kind of family unit amongst the survivors, but I like how they don’t use exposition to explain their back-stories. We know about Martin (Connor Paolo) because we saw what happened to him, but what about Mister? There is a completely different story to be found in that character, but he never explains why he is the way he is. Or what about the pregnant girl (Danielle Harris)? Who is the father? What happened to him? Never answered. Their performances tell us enough about what they went through, but if that’s not enough for you, there are a handful of ‘webisodes’ on the internet which fill in some of the gaps (the origins story has a hilarious ending). The acting is pretty good, although everyone has a few off-moments. Nick Damici (Mister) has a presence that reminded me of Josh Brolin from “No Country for Old Men” and Connor Paolo (Martin) is surprisingly endearing as the teenager. The deliveries might not be perfect, but they succeed in the areas that matter. 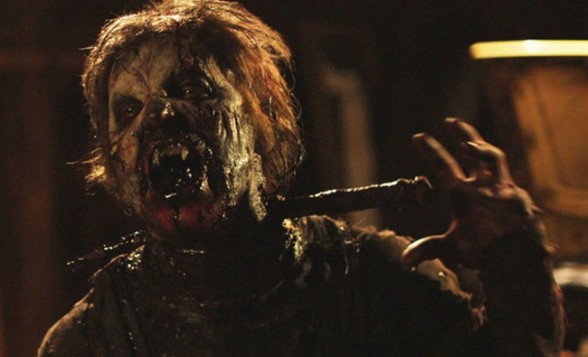 It seems like every review of “Stake Land” claims that it’s like “The Road”, except with vampires. While I can agree with some of the similarities, I didn’t think “Stake Land” was as moody or as slow paced. There’s always an action scene around the corner. The vampires are pretty menacing and the action is intense, even if it is tightly edited and shot, presumably due to the low budget. I wouldn’t call “Stake Land” scary, but it can generate suspense and does have a mean streak. When the intelligent vampire starts stalking the crew, it leaves enough to our imagination so it’s hard not to be creeped out. You also aren’t sure who will live or die. One of the first images in the entire movie is of a baby getting devoured by one of these creatures (it’s not sleazy about it, but it’s not shying away from what’s going on either). So whether you’re a badass, an underaged teenager, a pregnant chick, a token minority or a nun, we can’t help but feel that they might not survive through the movie.

Unfortunately, I can’t say “Stake Land” is a masterpiece. The music is very somber and at first, it captures the mood perfectly. But over time, it becomes redundant and I started to get tired of it. The ending was a total letdown. After building up such a great villain, the final confrontation goes by too quick and I didn’t want to see it resolved in such a normal fashion. It becomes a struggle of physical endurance, which wastes the idea of a ‘smart vampire’. I don’t know what I was expecting. Maybe something along the lines of “Predator”, where the characters would have to rely on their brains and resourcefulness? Who knows. But then the movie just won’t STOP after it climaxes. I didn’t think “Stake Land” was a slow paced film, even if it’s not in a hurry to get itself over with, but it runs out of steam after the final battle. To me, what follows was unnecessary and I started to get bored. 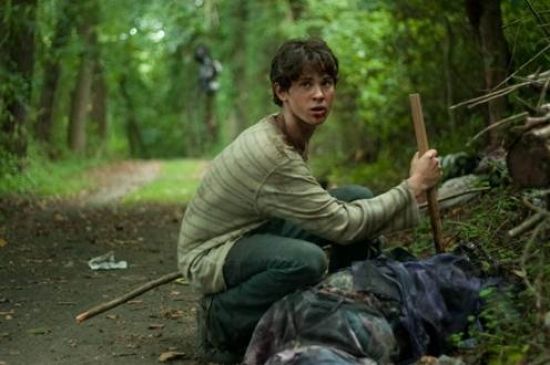 But it’s primary problem is that I felt they could’ve done a lot more with its character development and ideas. It gave me so much, but I wanted MORE. Ugh, how do I explain this? I would’ve liked more screen-time to be given to the intelligent vampire subplot. They introduce different kinds of vampires and even name them, but they don’t do a lot with the differences. Mister even mentions that he’s seen vampires with different mutations, but now he’s just being a tease. I want to see those! I wanted more of the conflict between the townsfolk and the cultists! I wanted to know about the cultists and their culture. I wanted more of the family dynamic instead of just having a narration SAY they became like a family and give a couple of scenes to support the claim. Now that I think about it, “Stake Land” has so many good ideas going for it that eventually it started to have TOO many good ideas. The end result is that there isn’t enough time dedicated to any of them.

But it does have IDEAS, a rarity in horror flicks. “Stake Land” has a script that is full of ambition, inspiration and creativity. Even though I wouldn’t call the story or setting ‘original’, there are enough quirks that make it fairly unique. I respect “Stake Land” for trying. The filmmakers don’t undermine their ideas, even if they don’t use them to their full potential either. I like “Stake Land” for not pandering to either the critics or the masses. It just wants to be a good movie that happens to have a home in the horror genre. As such, it succeeded. Perhaps if more money was put into it, the studio would’ve hijacked the production. Perhaps part of its appeal is that it is a low budgeted film, so the filmmakers had to use its money where it mattered. Regardless, “Stake Land” gave me hope. It shows that you can do something different, even if the final product wasn’t perfect.

Nudity: None, although there is implied and attempted rape.

Overall: “Stake Land” is definitely worth a watch, although I wouldn’t call it ‘great’.