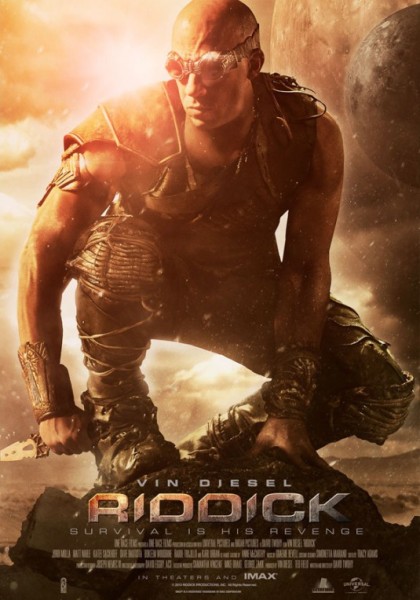 Plot: Former killer turned Emperor Riddick (Vin Diesel) is stranded on an abandoned, desolate planet where vicious monsters live. He decides he wants off this world, so lures two different teams of mercenaries (who want his head) in order to take one of their ships. Will it be a three way battle? Or will Riddick and the crews work together to survive?

“Pitch Black” as a whole was nothing exceptional, but it did provide us with the insanely awesome character known as Riddick. The moral ambiguity, the badass abilities, the cool character design and Vin Diesel’s creepy performance made him a fan favorite. What’s amusing is that Riddick was originally intended to die at the end of the movie, but the studios wisely chose to spare him and knock off the forgettable heroine instead. Everyone knew that Riddick was cool enough to warrant his own franchise, but where should they go with it? I would’ve personally presumed it would be like “Aliens“, where Riddick must continue to do battle with his previous foe (the monsters). I was wrong. Shockingly, they didn’t just decide to change the setting. They chose to change the genre from horror to action. The budget was increased, the rating went from R to PG-13 and Riddick was turned from an anti-hero into a reluctant hero, presumably to appeal more to the masses. This was “The Chronicles of Riddick“, which wasn’t terrible, but it deserves its lukewarm reception. Since then, the story of Riddick has moved to the land of direct-to-DVD and has changed mediums (to animation). But after Vin Diesel brought his career out of its current slump, he chose to resurrect his beloved character. So in 2013, we get “Riddick“, which has a scaled down budget and is a return to the formula of “Pitch Black“. Or at least that’s what the trailers want you to think. “Riddick” is filled with flaws, ranging from silly dialogue to awkward acting to subpar CGI to a busted up narrative, but none of that never stops it from being entertaining.

The general premise is how Riddick and the mercs must work together to survive against a common enemy, which made me- and everyone- else concerned that it was just recycling the story from “Pitch Black“. This isn’t really true. I’m going to break up this review into three different parts based on each act. The film opens with Riddick being stranded on a barren planet. It shows how he got there and it’s kind of nice that they don’t retcon “The Chronicles of Riddick“, even though the filmmakers obviously are aware of their mistakes with that film. The downside is…who remembers “The Chronicles of Riddick“? I was like: “Why is Karl Urban in such a small role“. It took some time before I remembered he was a character in that movie. But the majority of the screentime is dedicated to Riddick adapting to his new surroundings. He encounters aliens which have pretty cool designs, although they aren’t as memorable as the ones from “Pitch Black“. The first 30 minutes or so is just dedicated to him surviving and bonding with his dog-alien. It’s fairly moody, the humorous parts made me laugh and Riddick no longer feels immortal. The special effects are very hit and miss. Sometimes they look great, other times they look too much like CGI. To be fair, the visuals are pretty impressive for a $38,000,000 budgeted movie. Part of the reason I can overlook the questionable effects early on is Vin Diesel is so compelling and he carries the film on his own for quite some time. 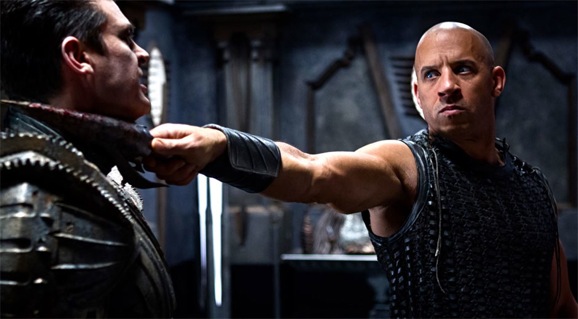 The second act is when the mercenaries are introduced and the film begins to focus on them hunting Riddick and vice versa. I have to give “Riddick” credit for making the mercenaries interesting as individuals…usually. You either genuinely like the majority of them or you just love to hate them. But they stand out, which is pretty awesome when you’re in a movie starring the super cool Riddick. Now granted, the film makes a few missteps in this regard. Some of the acting is pretty weak and the younger character seemed out of place. He starts becoming obnoxious during the third act when he won’t shut up about God. Yeah, the dialogue is pretty goofy too. But the important thing was that their interactions kept me entertained. I was bothered though how Riddick becomes a bit too invincible again though. For the most part, you don’t feel these mercs stand a chance. The movie seems to realize this, so it just wants you to have fun watching Riddick pwn these fools.

It’s not until the third act when the aliens start attacking. What pissed me off was how these deadly aliens ended up being the same creatures we saw in the beginning of the film. “Pitch Black” at least did a good job at hiding its monsters, which made their appearances more startling. But when you see the final enemy in full view during the first 10 minutes, that sort of diminishes their impact when they begin their assault. The special effects really start to look bad at times and the murky lighting took away from the battle scenes. Still, the action was intense, the gore was heavy and I was still enjoying myself. But for those who are expecting “Pitch Black”, I would stop that train of thought right now. I can’t bring myself to call “Riddick” horror, as much as I’d say it’s a dark, violent, survival action movie. I do hope that if this franchise continues, it will continue shifting genres without losing what made the character cool to begin with. 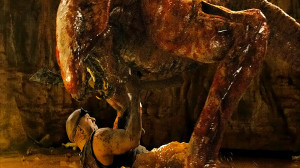 “Riddick” is one of those movies where the trailer really works against it. Much like how “The Grey” made its final shot the selling point or how “Iron Man 3” mislead us into thinking it would be about the feud between Tony Stark and the Mandarin, the trailer for “Riddick” relies too much on spoilers. If you haven’t seen the previews, then DON’T until after you’ve watched the movie. The trailer pretends that “Riddick” is a much different film, claiming that the finale is the overall story and it spoils a few important deaths. So if you expect that, you might be disappointed. In general, the narrative’s structure is pretty cluttered, as if it was cramming three different kinds of movies into one. But if that’s the case, then at least each of those different movies were enjoyable. I had fun. But I probably won’t remember this anymore than “Pitch Black” or “The Chronicles of Riddick“. I’ll only remember the titular character.

Nudity: Wow, this was pretty sleazy! Breasts and even a full frontal. You also see Riddick’s backside in a wide shot.

Overall: “Riddick” isn’t anything special, but it’s entertaining enough and Riddick himself is as cool as he has always been.